I went on my honeymoon/first anniversary trip back in mid-September, but it’s taken this long because of a.) life (work, injury, etc.) and b.) my typical photo-uploading site, Webshots, is changing and being stupid. Therefore, I can’t add photos the same way. *siiiiigh*

In other words, this meant the revival of my very old Photobucket account, since I’m not the biggest fan of how Flickr works and I refuse to link to/put my entire life up on Facebook.

Regardless, I’m here now and I’ll do these posts as a series, doing the posts almost entirely as they appeared in my journal as I wrote them on the trip, adding in a few photos as they fit in.

So right now, we’re on our flight to London. We didn’t fit in a run this morning before we left, which kind of bums me out given that we’re running a half-marathon in (eep!) 11 days.

And that transition made no sense. Let me start off with the beginning of today …

We woke up too late to run. Granted, we still could have chosen to fit in a small one but, given everything, thought it best if we didn’t bother. Why stress ourselves out? Just makes me even more thankful I got in a 10-miler on Saturday!

I finished the iTunes project (finally!) and we finished packing, only leaving the house 10 minutes late which isn’t too bad, all things considered! 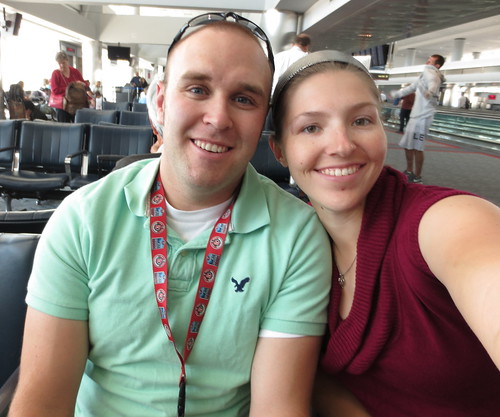 First flight was a very full one – Denver to D.C. Fairly typical, uneventful flight. Listened to my iPod and read my nook the whole flight. Landed in D.C. and was ravenous. Barely had any time to grab food (and the place i went was ridonk slow), but grabbed a muffin, sandwich and chips. Snarfed the muffin while Brandon was talking with the captain.

We were kind of hoping – but by no means expecting! – to get upgraded to first on the flight to London. Dad had gotten us Economy Plus and Brandon got us an exit row online, but we knew the flight wasn’t full and had a slight hope!

Happily, talking with the pilots (who talked with the gate agents, who were ultimately probably the ones responsible), got us upgraded to business first! Nice way to start off the honeymoon, eh?! And yes, business first means pod seating, full recline, etc. The kidlets will probably expect this from now on … 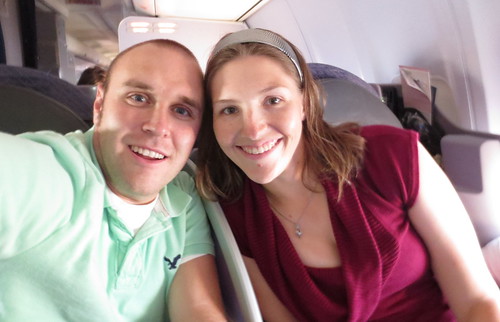 So food. First was a cold appetizer – I had salmon-wrapped shrimp (all cold) and Brandon had something on a skewer. Oh and there was bread. Always bread. Next was a basic salad, which we had with a parmesan pepper dressing (needed less pepper). Both of us chose a beef tenderloin for dinner with roasted potatoes and green beans. Not bad for plane food. Then cheese and grapes for dessert followed by ice cream. Not too shabby. 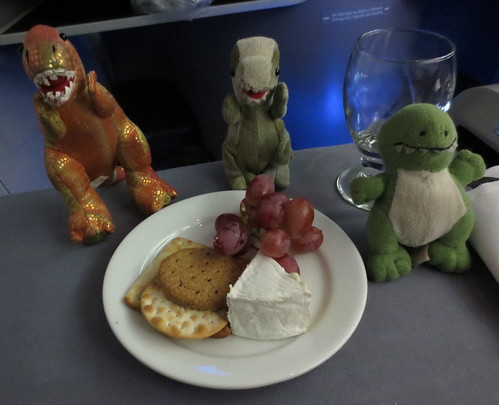 Transcontinental flying also means … movies! We watched Men in Black 3 on our flight from DEN to IAD. Not as good as the original, but possibly better than #2. Josh Brolin did an outstanding job as a young Tommy Lee Jones. The ending was also quite cute, with essentially seeing a young Agent J. However, I don’t think the script writers essentially wrote Agent K to be a cheating whore, as that’s what he was with O … because in movie 1, we know he misses his wife and didn’t have his memory erased. So who knows.

I got to see Disney Pixar’s Brave, which I kind of wanted to see when it came out. It bucks Disney tradition in that there’s actually *gasp* a mom! And she lives! Sure, she gets bewitched, but (spoiler) that was only temporary! Strong, SINGLE female character and a living mom? Geez, Disney, what the hell? It’s like you joined the 21st century or something.

Brandon’s currently watching The Hunger Games, which made him pretty giddy. He’s so cute.

My hand’s starting to cramp and I need to pee, so I think I’ll wrap this up for now. Rest of the flight will consist of going through the magazines I brought so I don’t have to lug those still, probably more nook reading and posibly more movies … but who knows. I should check out the Newsroom (TV show) because I have the capability and because, you know, trained journalist and all, but I dunno.