A few weeks back, Brandon and I met our friends Nic and Leanne for dinner at Root Down, a restaurant in the Highlands neighborhood of Denver. The restaurant, located at 33rd and Osage, resides in a former garage.

Root Down has become known in the Denver dining scene for their cuisine which, according to their own words, follows a “field to fork” mentality, trying to stay as organic, natural and local as possible. The menu itself has a list of all of the local farms/distributors on it. As a result, the menu also changes seasonally, so very few things are constant on the menu. We figured this out while reading Yelp reviews of the place waiting for our friends to show – people were recommending dishes that weren’t on the menu currently.

We’re pretty basic when it comes to food – we don’t experiment too crazily and a lot of “exotic” foods make us a bit nervous, but we decided to take the plunge and finally accept Nic’s invite to Root Down (she’d been insisting we go for months) … and were glad we did.

Since we were early for dinner, we sat and waited … and I commented to Brandon that the chairs we were sitting in seemed familiar. I mentioned the possibility that they came from the old Stapleton Airport – Brandon thinks that’s exactly where they came from. Just like Root Down tries to go local with their food, they did the same with their building materials – the floor was an old gym floor, repurposed. It makes for a funky, eclectic, slightly hipster, but very cool, vibe.

Nic and Leanne came and we had some wine (well, the girls; Brandon had to work that night). I don’t remember the red I had – I’m still very much a wine newbie – but it was actually fairly tolerable. Nursed one glass all night, but eh.

The Brussels sprouts and kale salad was a lot going on at once, but it all worked at the same time (how, I don’t know). I had quite a bit of it. The hummus was definitely different from other types of hummus I’ve had, but at the same time, it was quite tasty. I had it with cucumber, the surprisingly tasty gluten-free flatbread and watermelon radishes, which I regret not getting a photo of because they are cool looking.

For the meal, Brandon and Nic ended up getting the same thing and Leanne and I did as well. Nic and Brandon had the following:

Nic had hers with gluten-free buns, of course. Speaking of which, the menu is clearly labeled in regard to vegan and/or gluten-free items and has specific cooking areas on their grills as to accommodate as many people as possible. To quote their Web site – “At Root Down we pride ourselves on striving to solve the ‘Omnivore’s Dilemma’. We have created a dining spot where all dietary needs will be accommodated, including vegetarian, vegan, raw and gluten free; also allergies or intolerances are always handled professionally by the kitchen team. Our menu has icons reflecting this philosophy, though we always request you notify your server of specific needs.”

I tried the sliders; something on them – probably the aioli – was way too spicy for my tastes, but I probably ate more of Brandon’s sweet potato fries than he did. Oops.

In reading the reviews, a lot of people said to try the seasonal gnocchi, so that’s exactly what I (and Leanne) did:

It. was. fantastic. I inhaled it. It was a decent-sized portion and I devoured it. Definitely try the seasonal gnocchi if you go.

While we were all fairly full, we still decided we needed dessert … so we split one: 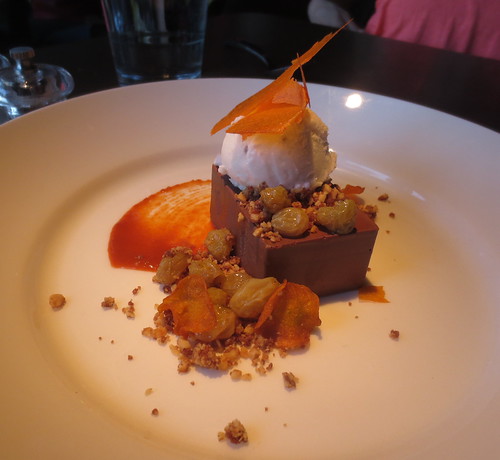 While it looks fantastic, this was actually my least favorite part of the meal. I’m glad we split this between the four of us because I definitely wouldn’t have wanted to eat this all by myself.

Dinner was a bit pricey for the four of us, but it was well worth the good food, good friends and good conversation.

If you’re in Denver – or even the airport! Root Down has an outpost on Concourse C at Denver International Airport – and are looking for locally-sourced cuisine and/or have special dietary needs, give Root Down a try. We’re glad we did.

One thought on “Root Down Denver”