So, back a couple weeks ago (oh hell, almost a month ago now), Shinedown came out with a new album (FINALLY), “Threat to Survival.” Since I downloaded the album into iTunes, I’ve wanted to write down a review/my thoughts … but I wanted to be able to give the whole thing several listens and really formulate my thoughts.

I think I’m finally at that point that I’d like to do this … plus I can’t really put it off much longer because I’m going to go see them live (again!) on October 31st and I’d like to get this out before I need to recap the concert.

Note: I’ll preface this like I did my last CD review – trained journalist, but not regarding music reviews. This will be my second, and mostly in the same format as the first, going song by song.

Overall, it’s a solid album and a great fifth effort by Shinedown. It’s definitely a bit of a departure stylistically from “Amaryllis” and “Sound of Madness” which newer Shinedown fans may not like. (I might be an exception here.) They draw from a lot of different influences and sounds and genres but blend it all together in a way to still make it distinctively Shinedown.

My first main nitpick is that while all the songs fit together thematically, if you listen to them in album order, from track one to track eleven … there’s really no flow. It feels a tad disjointed. I wonder if this is an unfortunate byproduct of the digital age, where whole albums might be purchased, sure, but probably not ever listened to in the proper order. I’m old school, so I made sure to listen to the entirety of “Threat to Survival” as it should be.

Asking For It
– This song is a great opener. I feel like the early riffs have … maybe an early-90s, almost punk, upbeat influence? Yes, I may be talking out of my ass here, but it’s familiar and it’s not recent.
– Every time I listen to this track, I marvel at the line, “When all is said and done/You need to tie your tongue” because it is a masterful twist of phrase. Being tongue-tied usually isn’t a good thing and typically associated with being unsure/astonished in a situation. To be told to purposefully tie your tongue, well, it means you’re too overconfident and need to back it off. LOVE. IT.
– Great message to beware of words and their power.

Cut the Cord
– This may have been the first single, but I actually think it’s one of the weakest songs on the whole album. Husband agrees with me on this point. There are so many other, better songs.
– That being said, I think next year’s new Ironman inspirational quote is coming from this song: “Be a fighter, backbone, desire/Complicated and it stings, but we both know what it means/And it’s time to get real and inspired”.

State of My Head
– I like this song, but I don’t know why, because the lyrics don’t really speak to me.
– However, the lyricality (yes I made that up) in the music and the flow of the words really works and sometimes, that’s what does it for me in terms of liking a song, so maybe that’s it.
– Brandon, however, doesn’t like this song much at all.
– All the lyrics websites say “concrete street skin” and I believe they’re right, but the first few listens I heard “concrete thick skin” and I like the way that sounds better so I’m going with my delusion on that line.

Outcast
– I don’t even know which genre influenced this song, but this might just be my least favorite song of the bunch.
– Musically, lyrically … it just doesn’t speak to me.
– Also – and this might be part of why I don’t like this song (as much) – outlast every outcast? I’m not 100% sure what this even means. This is really the one song that I just can’t understand the (underlying) message of.

How Did You Love?
– Best song on the album, hands down.
– Full of fantastic EVERYTHING.
– Okay, so it might be a tad 80s power ballad – there’s a total moment of this right before the bridge – but whatever, it’s still awesome.
– I have the most amazing vision for a music video for this song, so if any of y’all are curious and interested in getting that made, call me.

It All Adds Up
– AKA Shinedown does musical theater.
– No, seriously, stick with me on this for a second. Picture the snazzy outfits the band wore on tour in spring of 2013 and match them (and an ensemble cast, of course) with either a “Guys and Dolls” and/or “West Side Story” inspired set and mix in some finger snapping and dance moves. See it? I know you do. The whole tone change after “and it all adds up” completely works with this theory.
– I also find this song awesome, by the way.
– Brandon adores the line, “Every murder has a motive but you ain’t killing me”.

Oblivion
– This to me, more than any other song on here, throws back to early Shinedown.
– Brandon likes this song; I’m actually ambivalent. It’s probably in my album bottom three along with “Cut the Cord” and “Outcast.”
– Part of why Brandon probably likes this song is the “soul sisters” (as he calls them) in the background.

Dangerous
– When previewing this album on iTunes the day/night it came out, the 90 second (or whatever) clip of this song did not impress me. In fact, I thought it was kind of cheesy. Of course, that preview pretty much started with the chorus and skipped out on the first few lines which set up and explain the whole freaking song.
– Needless to say, I love this song and it is one of my favorites. Possibly second favorite behind “How Did You Love?”.
– “Maybe if my arms were ten feet tall/I could finally reach that crystal ball.” This line speaks to me and I have loved it from the first listen. I have absolutely no idea why.
– I also adore the message of this song, and I think I know where the next popular Shinedown tattoo lyric is going to come from: “Everybody/Is Somebody/And anybody is you/I own my story/I won’t say sorry/And neither should you.” (I initially thought just the second half of that – from “I own my story” onward, but the whole bit really works.)

Thick as Thieves
– This song took several listens to grow on me, but now that it has, it’s one of my favorites.
– I read this song as someone talking to an old (possibly former) friend (or lover), but reminiscing or trying to convince said person to let him/her back in said friend/lover’s life. I don’t know if that’s what they were going with, but this song really hits home for me as I’ve lost several close friends in recent years for stupid shit, really.

Black Cadillac
– This song probably rounds out my personal top four favorites solely due to the music.
– I’m not entirely sure where the influences on this song came from – blues? gospel? – but whatever the homage, I adore it. The lyrics are honestly a bit meh, but oh god the awesome music makes up for it.
– Also, I totally need to stop living in the past in a few areas of my life, so this song helps beat that into my head, which I need.

Misfits
– This song is a great album closer. While I made the note above about how I think the album is a tad disjointed, the opening and closing songs are on point.
– This song, again, speaks to me, for I have always been a misfit.
– (Basically, high school. Oh high school. This song can make me cry.)
– Musically, this song is also very strong.

While yes, I did mention “least favorite” songs, I really do love the entirety of “Threat to Survival.” Extremely solid, and I can’t wait to see a good chunk of these performed live.

The lobster shoes from the last quarter? They hath returned. 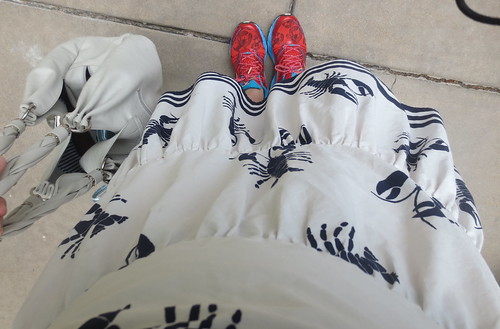 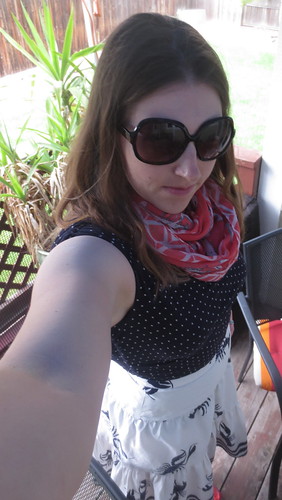