What, another Shinedown concert post? I know, I know … I feel like they’re the only band I go see.

In the post I wrote after the Saints and Sinners Ball, I commented, “I’ve seen this band three times … and I’ve essentially seen the same show three times. If the show I’m going to see of theirs in March (hopefully) is basically the same show again … I may not want to go see them anymore because I don’t want to spend my money on the same. exact. show. over and over again.”

Well, they came to Colorado Springs on March 13 and it so happened that both Brandon and I were around to see them. I decided to give them one more shot and see how it went. The show was part of a small West Coast run, which is probably why they came to the Springs as opposed to Denver.

I worked that morning, went for a run (oh, Ironman training …), realized that yes, I was getting sick (as was Brandon), but screw it, and headed down to the Springs early. We had high hopes of getting a dang guitar pick this time, so we wanted to get to the venue early in hopes of getting close to the stage.

We grabbed a (should have been) quick(er) dinner at Denny’s and then got to City Auditorium about 4:45 (doors opened at 6). 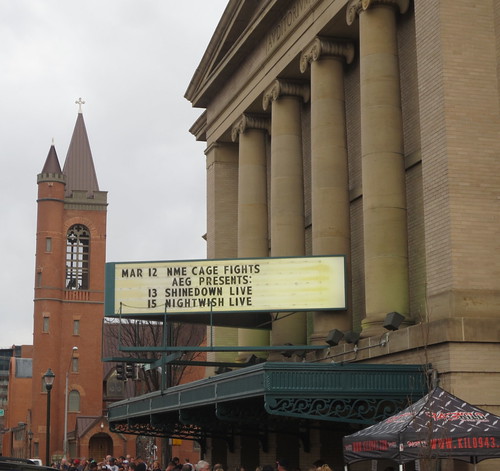 The line, when we got there, was just around the corner. By the time the doors opened, it was well around the block. When we got into the building, we split up – Brandon stampeded the stage to get a spot and I high-tailed it toward the porta-potties.

This was successful. We were about three or four “rows” (as rows is a very fluid thing on the floor) back and next to a really nice couple who we chatted with to pass the time until the show started.

The opening act was the Virginmarys. They were … okay. Sounded a bit familiar despite never knowing about them before this, but when I heard the lead singer talk and realized he was British, it made sense. This is going to sound a bit crazy, but all British rock bands have a similar sound. It might be a chord here or there, but there’s teeny tiny little similarities, from these guys, to Oasis, to Blur, to whomever. 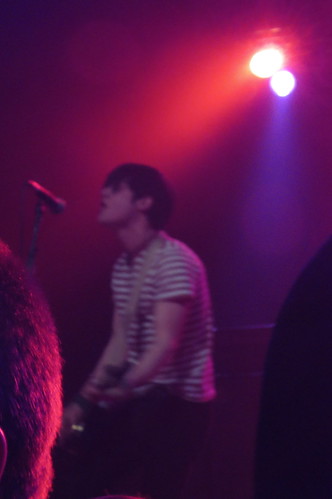 I could tell this Shinedown show was going to be a bit different because there was no swath of fabric blocking the stage between sets like usual. Which really just meant we could see the roadies set stuff up, but you know.

Unity
Fly From the Inside
Diamond Eyes (Boom-Lay-Boom-Lay-Boom)
If You Only Knew
Cyanide Sweet Tooth Suicide
The Crow & the Butterfly
Through the Ghost
Enemies
I’ll Follow You
Amaryllis
Cut the Cord
State of My Head
Second Chance
45 (acoustic snippet)
Simple Man (Lynyrd Skynyrd cover; acoustic)
Sound of Madness
(thanks to setlist.fm)

“Unity” was different as an opener, but I liked it – upbeat, happy … it set the tone for the rest of the show. “Cyanide Sweet Tooth Suicide” is something they haven’t played live in several years, so it was a nice treat to hear that. “Through the Ghost,” likewise, was amazing and I pretty much cried through the whole thing.

“Amaryllis” was played due to a Twitter request from a fan (who played it at his wedding); another song I cried throughout.

I was a little bummed once again that they didn’t play more off of “Threat to Survival,” but I really have no complaints. The guys interacted with the crowd the most out of any of the three previous shows I’d seen and it was the least scripted, as well, which I really loved. I felt like they actually cared about we, the fans, as opposed to some of the other shows of theirs.

And of course, my close-up spot afforded some pictures … 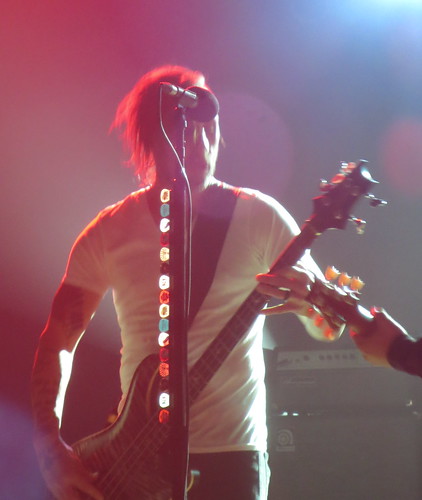 Both Zach Myers and Eric Bass (pictured) had guitar picks on their mic stands and I loved the way the light reflected through them. 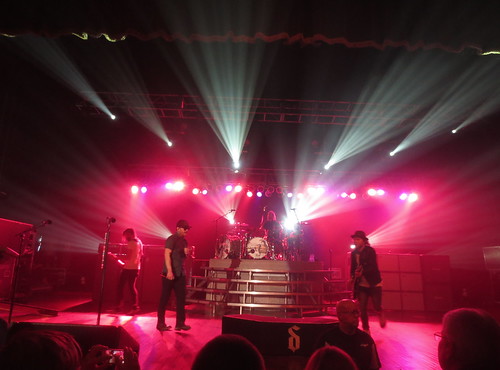 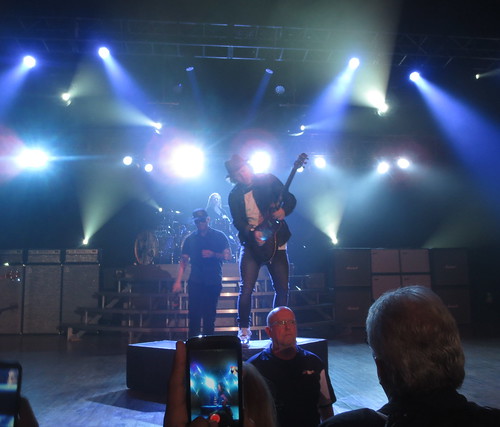 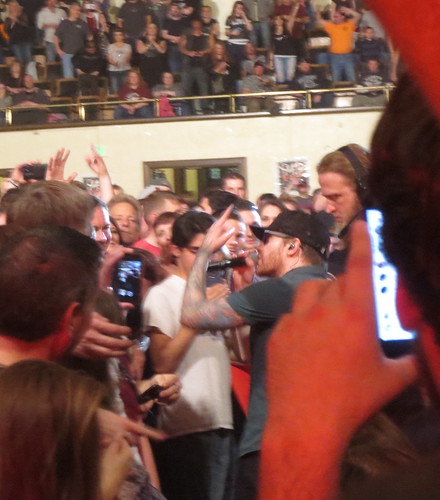 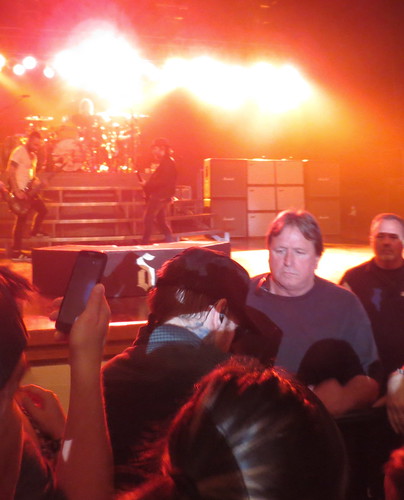 So Brent Smith parted the crowd and hopped onto the floor to talk to the audience … and as a result, we moved up a row or two on the floor. 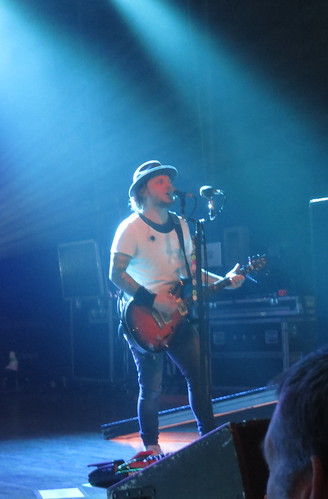 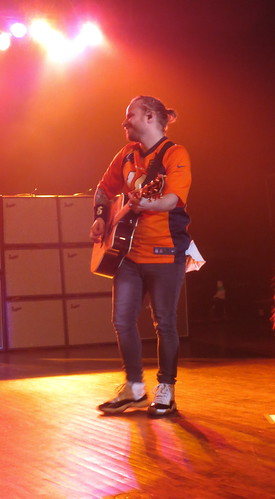 For the “encore,” Zach came out in a Peyton Manning jersey. He’s a Titans fan, but is a general fan of Manning’s from his days at Tennessee. 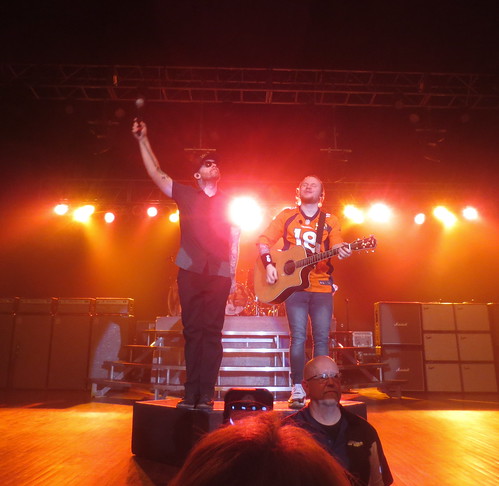 Also of note:
– Brandon caught a water bottle tossed by Brent Smith – twice.
– WE FINALLY GOT OUR GUITAR PICKS!!!! We got two – one of Eric’s and one of Zach’s … and should have had at least one more. One came right near me; I turned on my phone flashlight to find it … and some guy next to me used my genius against me. Boo.

In closing: Shinedown’s music is amazing; we know that. They sound good live; we know that. But when the guys put out a personality during the show … they’re really hard to top.