That title … looked a lot less awkward when I wrote it out … Oops.

Not a lot of pictures these days, so that’s why they’re all combined into one post.

Saturday, April 16, was our 5K, which if you really care how it went, go here. Pre-5K, we went back to the Busy Bee for breakfast, and post-5K, we stopped at Starbucks and Dunkin’ for some sugary goodness.

The Starbucks we stopped at was the one on Boylston right near the Marathon finish line, and it had some pretty cool stuff inside … 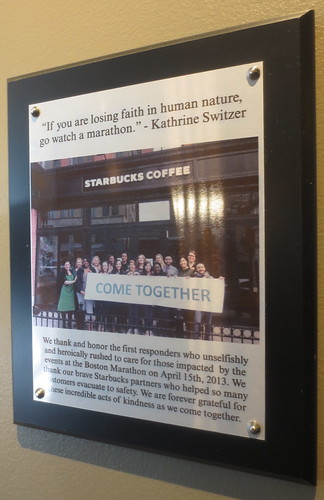 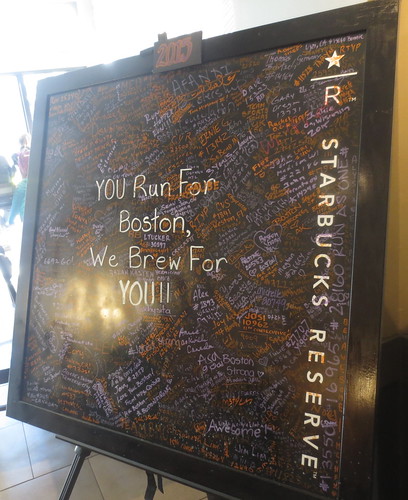 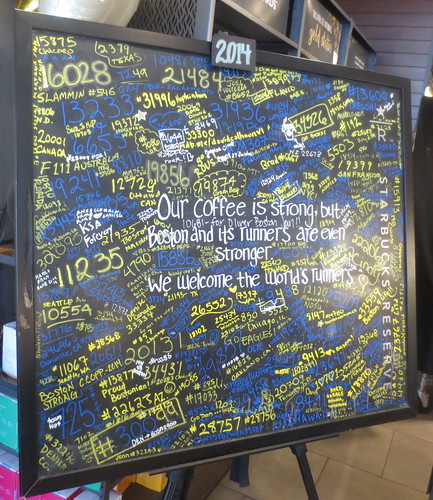 How neat is this?

We went back to the hotel to shower and then grabbed a disappointing lunch at Sunset Cantina before heading to Walter Brown to watch my team’s alumnae game. 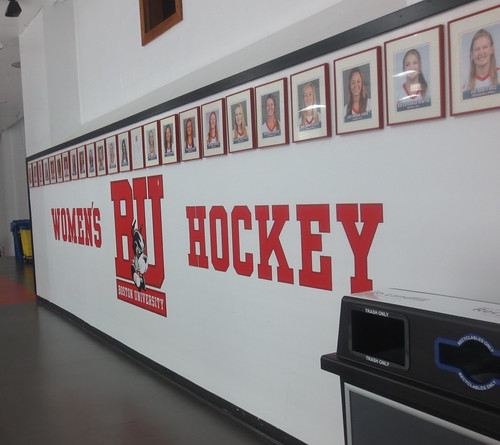 I’m really thankful I didn’t play, as there were NO former club players who played; just ladies from the D-1 era. I would have gotten my ass kicked. The whole day really was kind of depressing …

After the game, we headed back to the hotel for a minute before going back down towards Copley to meet Nic for dinner at Legal Sea Foods.

On Sunday, April 17, we went for a literal donut and coffee run. 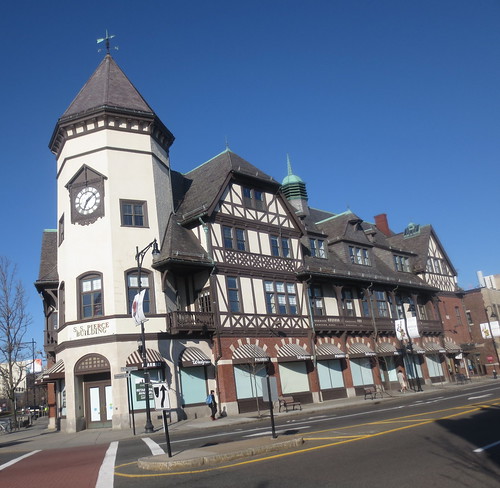 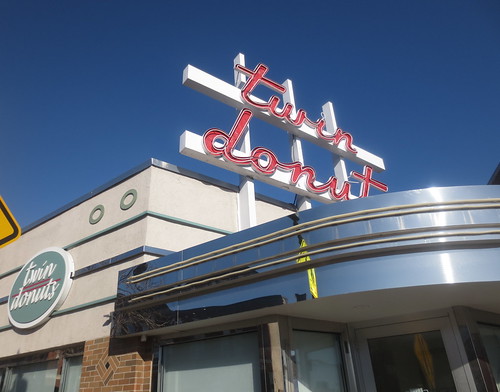 Got back to the hotel, showered, and busted our ass over to Porter Square to check out the deliciousness that is Bagelsaurus. 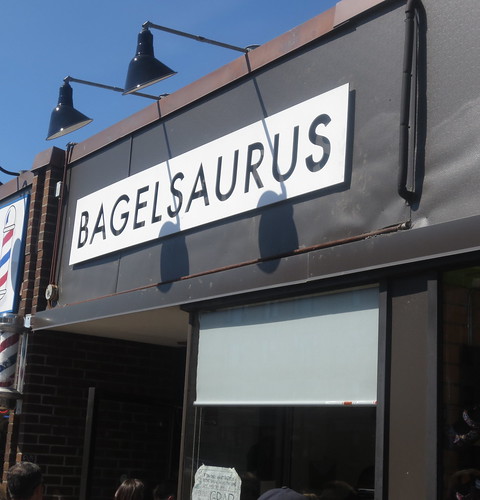 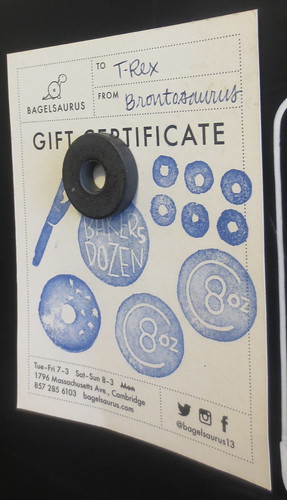 We took our bagels to go and transferred over from the Red to the Orange line (quite possibly only the second time in my life I’ve taken the Orange) to head to Somerville to see my first college roommate, Courtney. We hung out with her for a couple of hours before needing to head back to our hotel to change and get ready for Blue Man Group. Blue Man doesn’t allow photography, so that’s why you see nothing here.

Blue Man, by the way, was a first for me. Brandon had seen them before (and had been trying to talk me into going for years), but I hadn’t. I’m glad that I went. I loved the music and the artistry of it. We joked that it was musical theater for men. Now that I have gone, I do say that I would go again, but not for several years, especially since Brandon said it was a very, very similar show to the last one he had seen years prior.

We got a bite before Blue Man at D’Angelo’s, but that was really just enough to stave off hunger; we were ravenous after the show. Off to T. Anthony’s it was (and Angora …) and a stop in a bookstore in Coolidge Corner on the way back to the hotel. 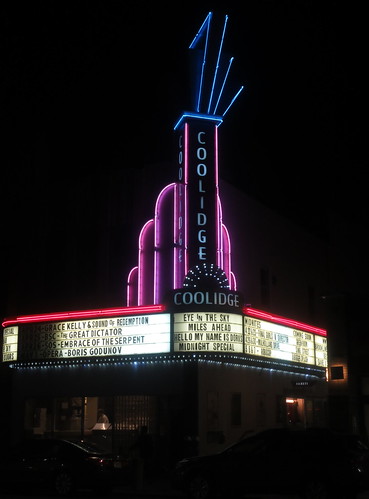 Monday, April 18, was Marathon Day (also Patriots’ Day). We woke up, ate breakfast at the hotel, and then headed over to FitRec to get in a nice lift at an amazing facility … that opened up way too late senior year. Silly BU. After that, a quick stop back at the hotel to shower and change before heading down to our cheering spot between 40K and mile 25. 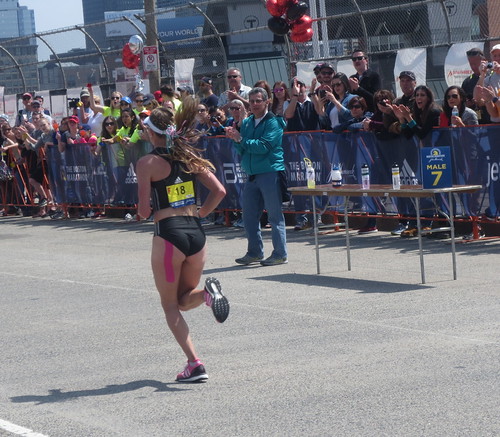 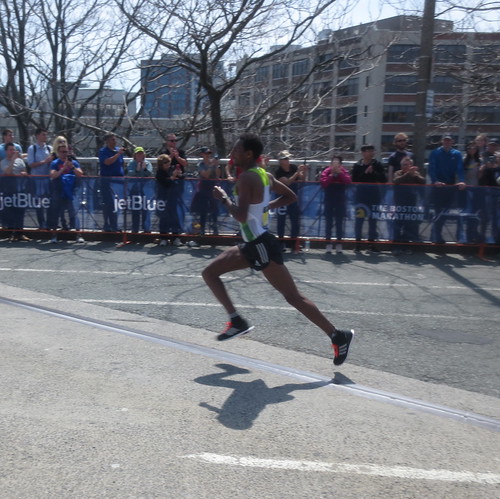 One of the top men. Look at that form! 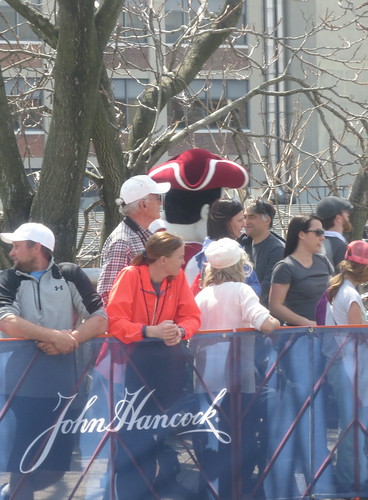 That mascot head is Sam the Minuteman from UMass(-Amherst). Kind of fitting he was out and about on Patriots’ Day … 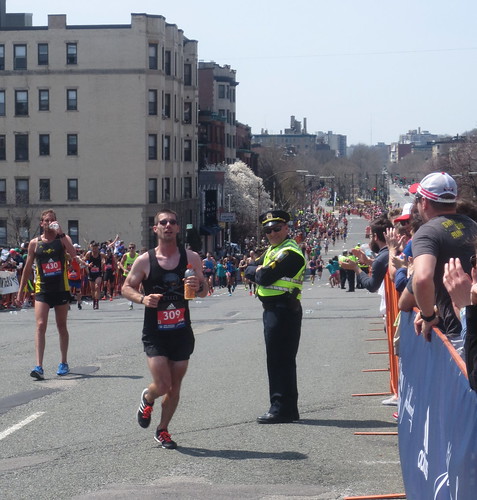 Norm coming in for a hug. He raced the 5K with us on Saturday and took the Marathon easy … which for him was still a 2:50. 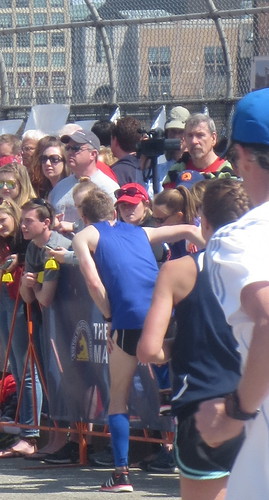 A friend of ours from Colorado, D.J., going through a rough stretch. 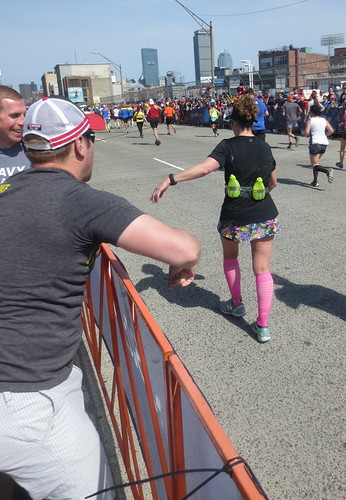 Friend and realtor Susie leaving us. She later said we were her “Mile 25 angels.” 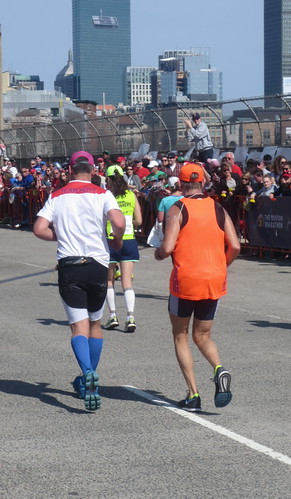 On the left in white, our MaccaX buddy Simon. 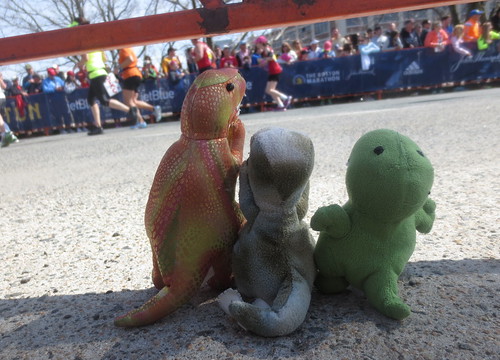 After cheering, we were pretty hungry, so we grabbed some pizza from T. Anthony’s and then headed to Spike’s for their cheesy poodle fries. 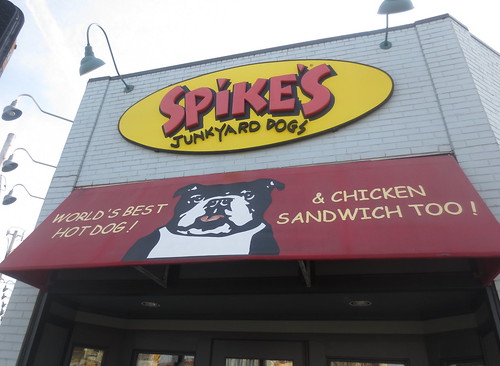 Dinner … ended up not really being a thing that day, but we did grab a drink at the iconic Dugout Cafe on the BU campus.