After we saw Shinedown in October, we figured we wouldn’t be able to see them in a while because of other tours and album writing and whatnot. But then … they released a small West Coast tour. We grumbled slightly about them not coming to Colorado this time, but then I spotted the first two shows on the tour – Albuquerque, N.M. on 3.31 and Tucson, Ariz. on 4.1.

I thought, “Dude. We could potentially see one of those two shows!” I talked to B about it and we decided on the Albuquerque show, as it’s a fairly easy drive down from Denver (6ish hours). He got the 31st off, I requested those few days off from work, we drove on down.

We were considering concert VIP for this show and thought we bought it … but all we did was buy VIP floor seats for the venue (which was 100% worth it, mind you). They had the meet and greets for the tour, but the packages for the ABQ show weren’t available until well after we had already bought our seats. Oh well, maybe next time.

Anyway, this show on the tour was weird in that there was no opening act. There are a few opening bands on this tour (As Lions, Cold Kingdom), but for whatever reason, not at this show.

We got to the venue (Legends Theater in the Route 66 Casino) way early because we weren’t sure if we needed to be in line for ages to get a good spot. We find out that we actually have seats for the show. 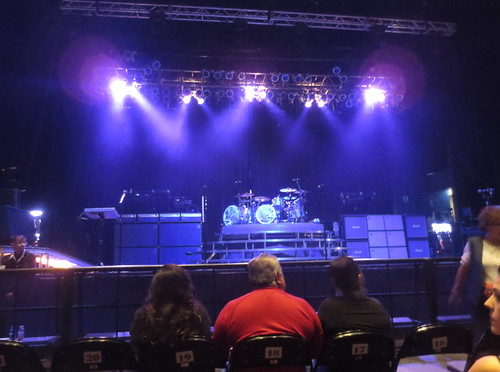 Kind of dumb, but whatever. We had several hours to kill and didn’t feel like sitting in a car for the drive back to our hotel (30-ish minutes, probably more with traffic), so we gambled a bit and then played cards in the back of my Rav until it was time to find food pre-show.

We did pop in the time the doors opened at 7 to get our seats. B asked one of the security people if we could get on the rail, but she said no. Not that that stopped everyone once the show started anyway … So we did end up getting up front anyway!

Before I get ahead of myself, set list, courtesy of Setlist.fm:

You could tell it was the first show of the tour as the boys were a little off (specifically through “Asking for It”), but it was a lot of fun. Brent Smith dedicated “Simple Man” to Zach Myers’ son Oliver, as it was Oli’s birthday that day (and during “Sound of Madness,” you could see Myers’ wife Bethany holding Oliver backstage. Cute kid.).

In terms of Shinedown shows we’ve seen, I would say it was average. Definitely not the best, but not the worst either. That’s not to say it was a *bad* show, though; on the contrary, it was pretty awesome. Myers was totally on this show and I think Barry Kerch was having more fun than usual.

Other items of note:
– Brent Smith, please stop growing the hair back out. You look creepy.
– Eric Bass, what the heck was going on with your hair???
– I quickly sharpie’d a “Happy B-Day to Oliver, Zach! :)” note on the back of our tickets (printed out) and showed it to him during “Simple Man,” and he seemed super touched when he mouthed “thank you” back.
– We raked in the souvenirs this show, with a drum stick (this one actually is a BKerch signature as opposed to the Halloween show one we got) and three guitar picks – one Zach, one show-specific (well, the first two shows of this tour) Eric, and a Back to the Future duplicate that we could possibly use to trade later.

I’m super thankful we made it to this show, as I’m not sure when we’re next going to be able to see them live again. 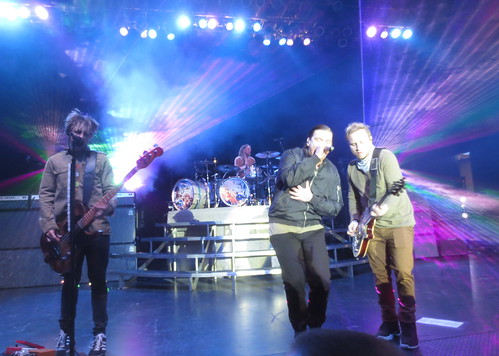