If that “live where you vacation” thing is accurate, we’re probably going to end up moving to Tucson at some point. Probably when we’re old. When we can handle the 100+ degree temperatures in the summer. Probably. Maybe.

This trip was originally hopefully going to be in early May and comprise of a training camp, but then we kind of took a month off of training and we realized the May dates weren’t going to work but we still really wanted to go and long story short … we went in early April, instead, when we were originally in theory supposed to be in Chicago for the Frozen Four.

I think we were both happier in the desert sunshine as opposed to the rainy Midwest.

We knew it was probably going to snow the day we headed out of town, but we didn’t realize it was as bad as it ended up being. I’m pretty sure the storm I was supposed to hit on the first driving back from Albuquerque got delayed and combined into this one. That meant that the three hours it normally takes to get across the border into New Mexico? Took over five. Walsenberg to Trinidad should take maybe a half-hour. It took us double that.

From home to probably just before Santa Fe, N.M., we were driving through snow and ice. Southern Colorado after Colorado Springs through the border was us going 20 to 25 miles per hour (35 if we got lucky), seeing multiple cars off the side of the road, seeing a car spin out in front of us heading up Raton Pass, feeling us fishtail at one point.

All in all, it meant a good seven hours of white-knuckle driving. It was TERRIBLE. 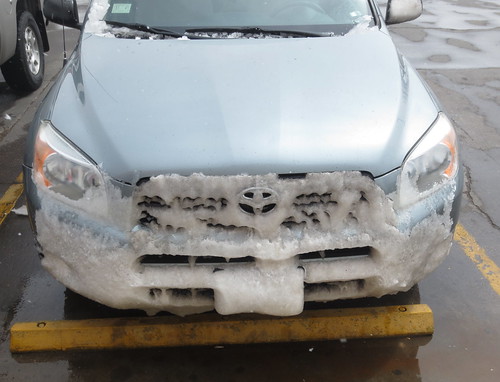 Front of my car. Photo taken in Las Vegas, N.M., where it was thankfully just rainy.

We rolled into Tucson right around 8pm Tucson time so really 9pm our time. A 12.5 hour drive (usually) turned into a 17 hour drive.

We were staying at the Hilton Tucson East, more on the southern (and obviously eastern) end of town.

Wednesday was actually fairly chill, just driving around and exploring. We stopped somewhere if we felt like stopping – like at the La Encantada shopping center – but it was mostly just enjoying the fact that we were finally on vacation.

We went for a short bike ride that afternoon and played some cards by the pool, but all in all, it was a very chill, agenda-free day.

Thursday was an earlier wake up call due to where we wanted to hit breakfast (food post coming later this week) and then we went trail running up at Sabino Canyon. 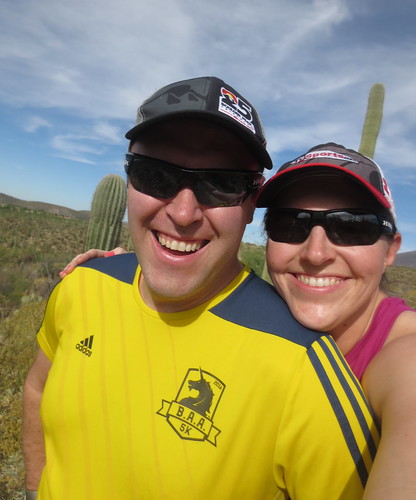 After the run, we went back to the hotel to shower and then went off to Tohono Chul Park to go look at cactus and use our botanic garden reciprocity. Because we like “free.” 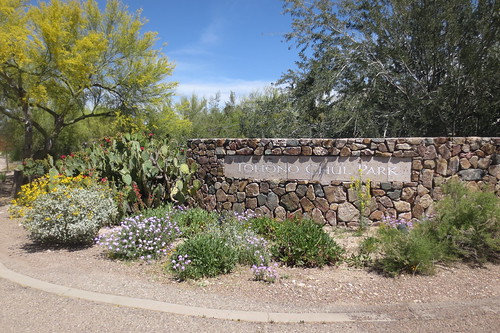 It was awesome and peaceful, just like any good botanic garden should be. We explored almost all of it, except for one of the longer trails because we were both getting hungry at that point. 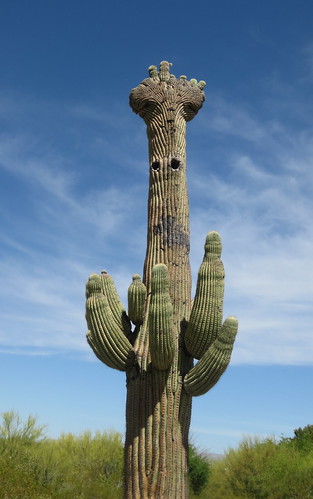 Crested saguaro! With a face! 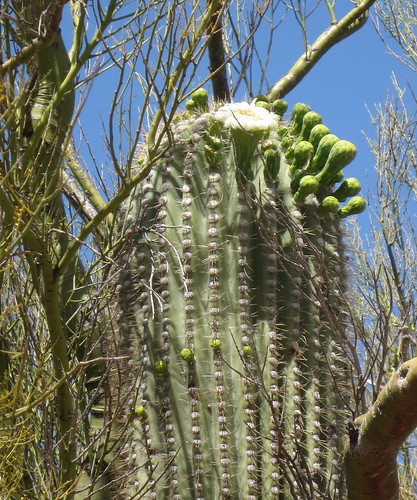 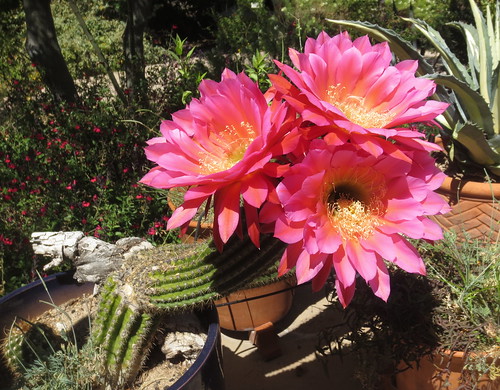 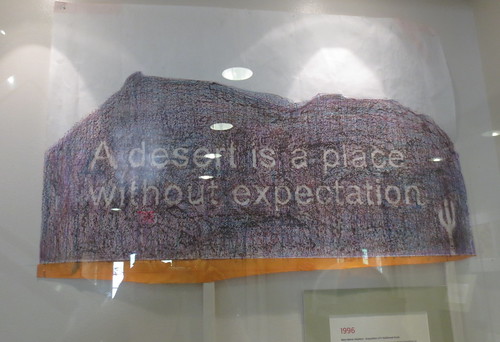 We hit lunch and then were so stuffed from lunch that we spent a super lazy afternoon flopped at the hotel. Dinner really ended up not being a thing that night.

We did venture back out to Sabino Canyon to try to get my elusive sunset shot, but once again … fail. I finally did my version of one of B’s standard photos, though. 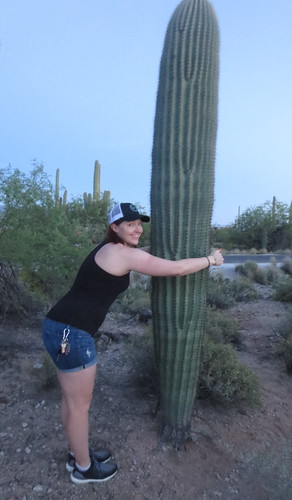 Friday morning saw us head to Saguaro National Park where we ended up purchasing the annual national parks and federal recreational lands pass. Since I’m quitting and we normally try to get a Rocky Mountain National Park pass, we figured the nationwide pass was a smart idea. As long as we do five more visits to parks/rec lands (easy as we need to hike a lot this summer), it’ll pay for itself. Seemed like a no-brainer.

We went to Saguaro mostly to hike around. And obviously take pictures. 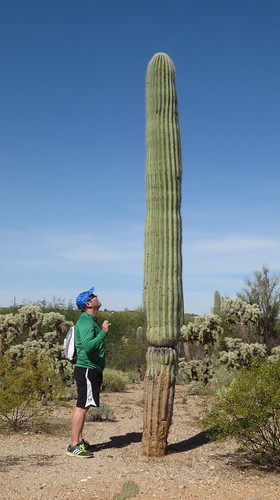 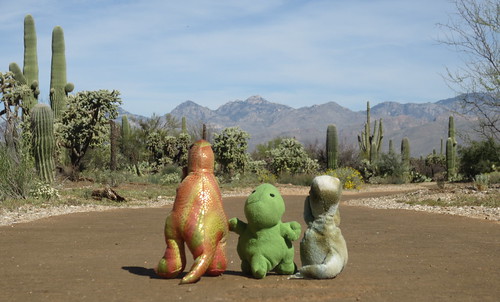 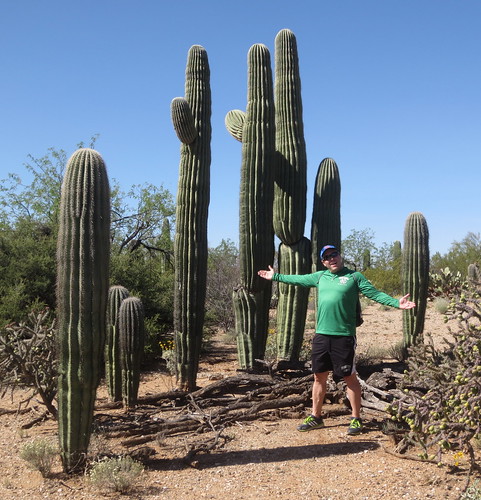 “These are my people.” 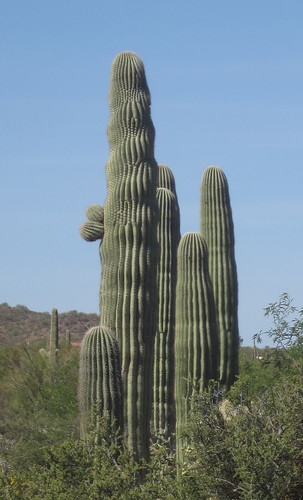 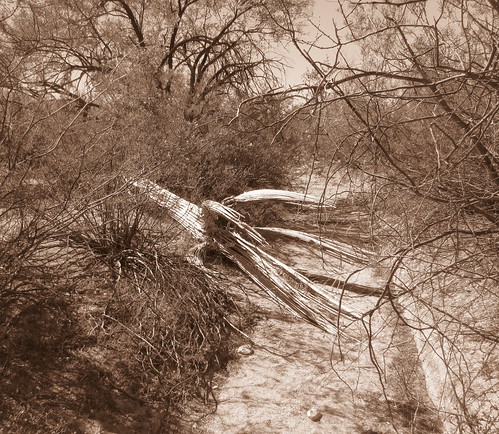 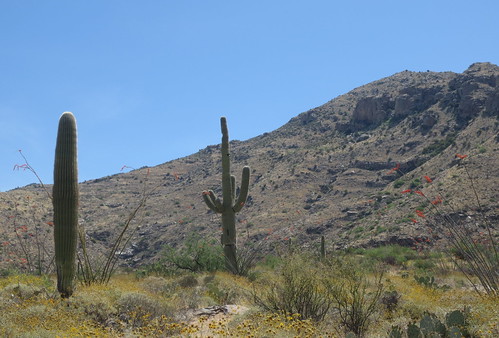 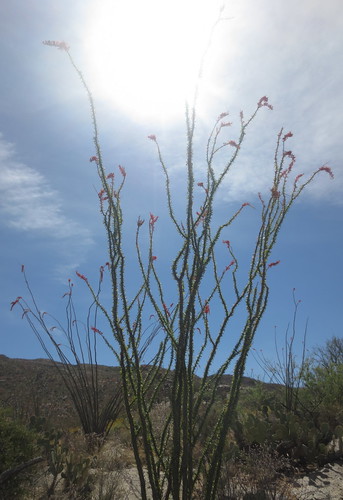 All the blooming ocotillos were stunning.

On the drive back … Tucson life goals: done! Almost ran the little bugger over with my car so unfortunately couldn’t get a picture.

We hit up lunch after Saguaro and that afternoon, met up to shop at SMASH HQ so I could try on some things before I bought them. Plus lots of time spent chatting with Hillary and Maik is never bad.

Dinner that night and then a way less stressful drive home on Saturday.