I’m not sure if I’ve mentioned it here before, but fall is probably my favorite season. Sweaters and baking and the weather and THE SMELL (seriously, fall smells awesome). I love it.

I also love all of the harvest festivals and autumnal activities that are included … and particularly in October. I was a bit busy this month – I did some of the following with B, but a lot by myself, too.

Every year, the town of Littleton puts on a free harvest festival at the Littleton Museum (which also has an old-timey farm). In past years, we’ve enjoyed pie and fresh pressed apple cider and delicious roast pig. Lately, though … it’s gotten more and more disappointing. I honestly don’t think I’ll even bother with it next year. 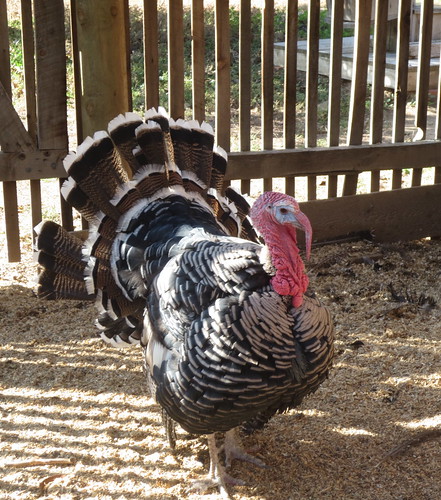 Turkey on the farm.

While the Pumpkin Festival is only one weekend, DBG Chatfield Farms has other fall-related events throughout most of September and October – corn maze, haunted corn maze, a pumpkin hauling race. We were only interested in the straight up festival. We didn’t buy a pumpkin, but we enjoyed wandering around. 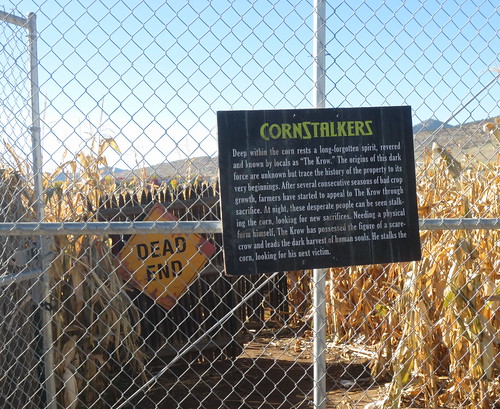 The story behind the “haunted” maze. 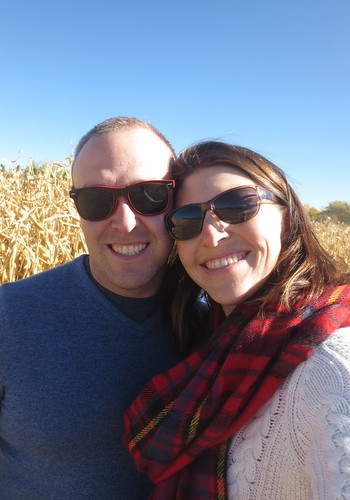 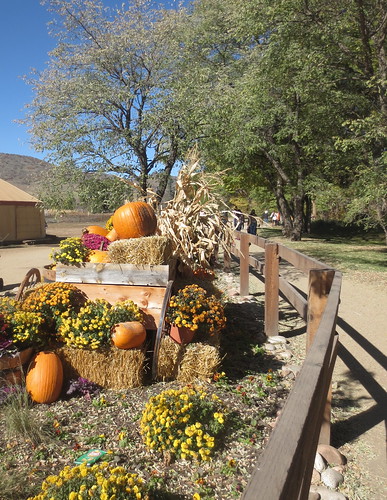 Dinos at the Denver Zoo

Okay, so this isn’t a yearly thing, but the Denver Zoo has had a dinosaur exhibit all summer that ends today, actually. In October, however, they made it into a “Dinos after Dark” thing that we didn’t go to, but all the decor was still up when we went in the morning a few weeks ago. For the purposes of this post, I’m mostly sharing the fall/Halloween-related stuff, but the actual animatronic dinosaurs were pretty dang awesome. 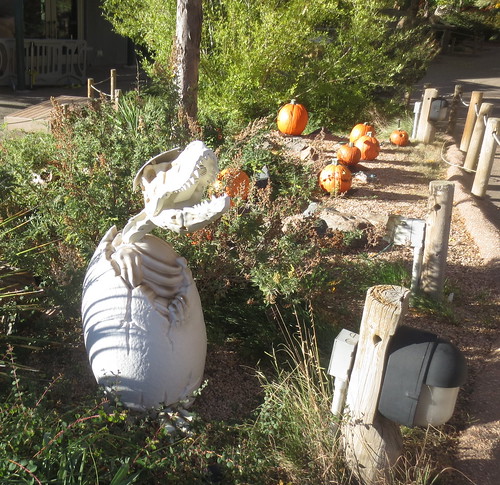 Baby T. rex egg. True story – they sell this at Home Depot. We bought one for the house. 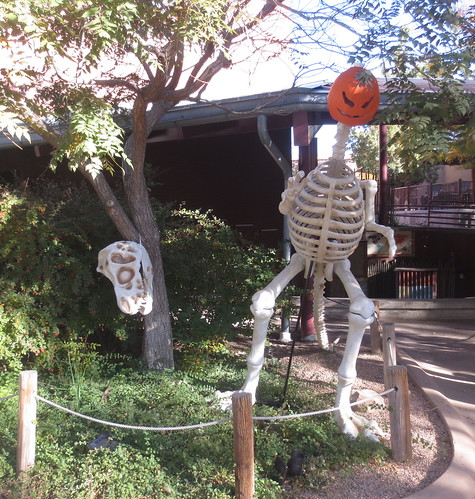 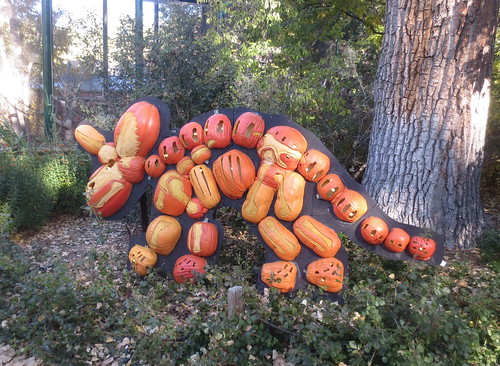 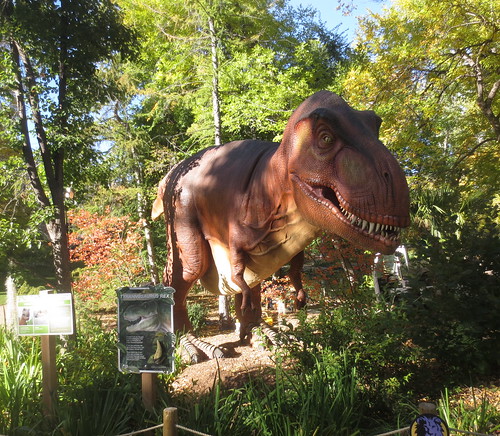 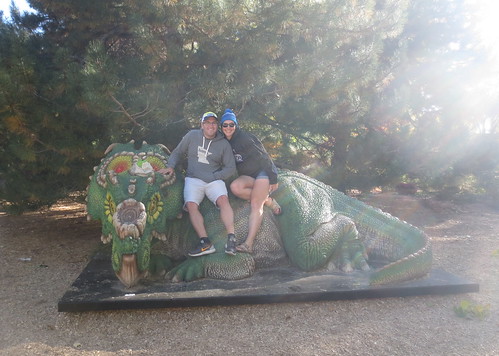 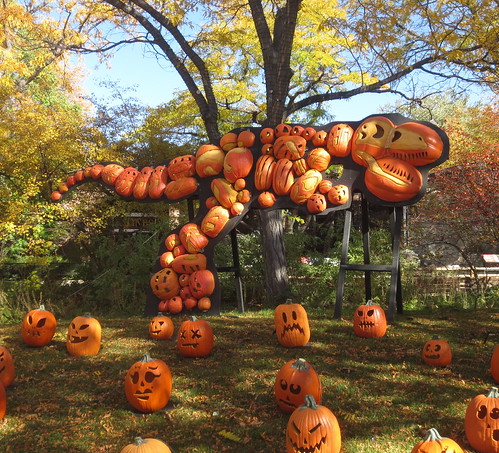 We’ve gone to Rock Creek Farm in the past as it’s one of the best u-pick-pumpkin patches around … but three of the four pumpkins we bought (on the 20th that have been sitting in our garage) have started rotting. Not helpful if we want to carve all of them! Usually I would recommend this place, and maybe I still would, but maybe not for pumpkins. 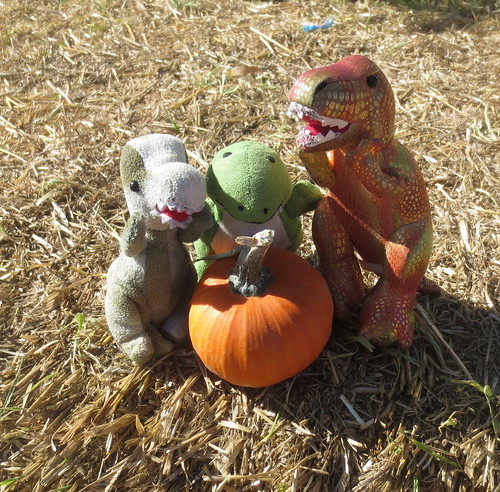 But aren’t the kidlets cute with their baby pumpkin?

I was lucky with weather for pretty much all of these events, so I’m not terribly surprised that I ran into snow on the final one (it is Colorado, after all). The Denver Botanic Gardens did a Halloween-themed event this year and I really wanted to go … so I went on my own. Chunks of it are staying up for another few days as there is some Dia de los Muertos stuff as well. This, despite the snow and cold, was actually really enjoyable. 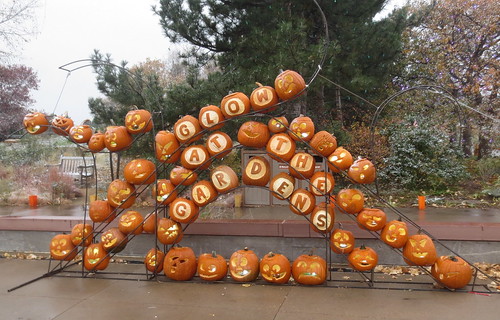 I did the earlier of the two entry times … mostly for parking and traffic, but also for more crowd-avoidance. Problem was, sun hadn’t gone down yet. 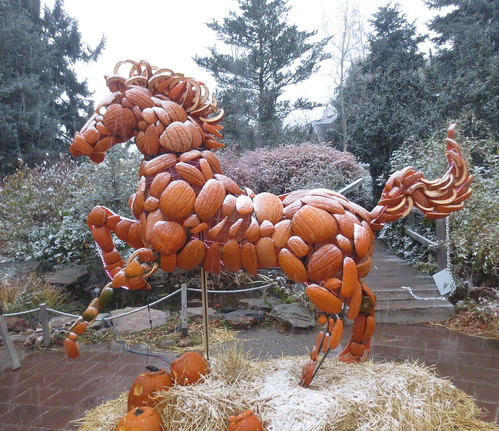 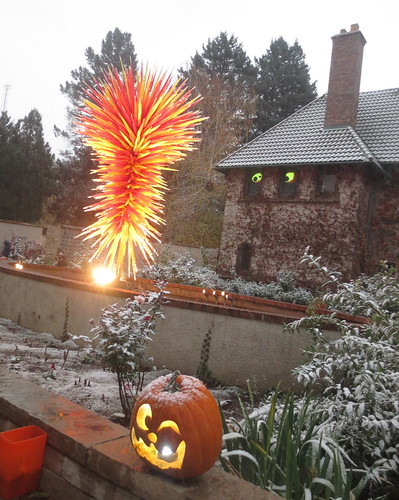 The Chihuly got photobombed. 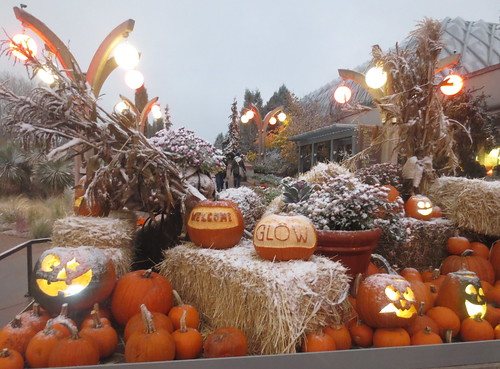 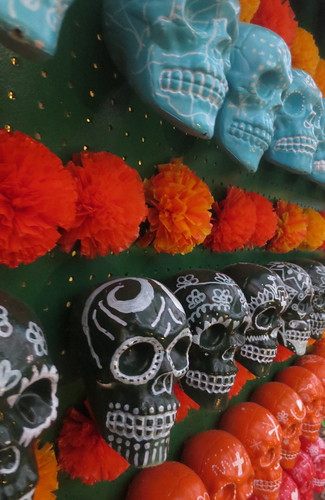 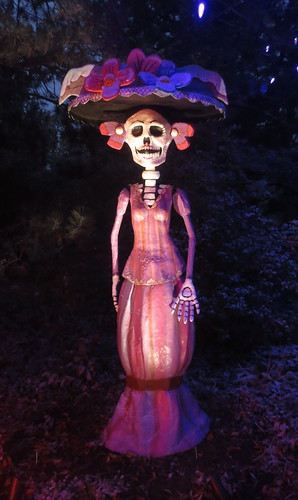 My favorite of the many Dia de los Muertos sculptures. 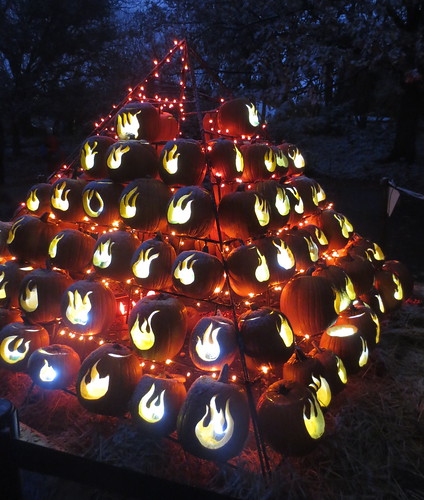 This would have been better if it hadn’t been so damn cold.

Three outfits, once again. I almost missed the third – wore it to a wedding and missed a good photo of me in the outfit – but I recreated it solely for the blog. I know, I know. 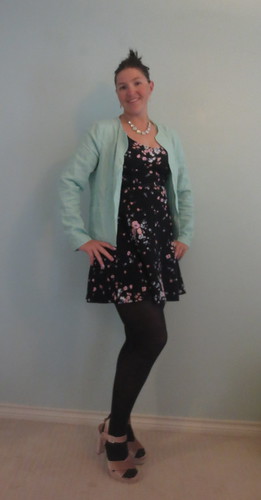 Recreated outfit I wore to a wedding on the 30th.