Also known as Shinedown show number 10 for me.

Since we missed out on VIP at the spring Shinedown show here in Colorado, when the “Evening with Shinedown” tour dates were announced, we looked to see if any shows made sense for us.

None really did geographically, but one stood out to me – the Madison, Wisc., show. As I’m doing IM Wisconsin in September, I figured that show would be a perfect excuse to head out and preview some of the course. So, we bought tickets and VIP as soon as we could.

As it is and so often with us … life had other plans for us.

Our original thought was to fly into MSP, rent a car, drive to Madison, rent bikes at a shop on the bike course, ride a loop of the course, go to the show, fly out the next day, etc.

What actually happened … ended up much differently. B is currently in training on a different airplane and, while he requested the date of the concert off, he didn’t get it. So, I was going by myself. As a result, I decided to drive out (so as to not deal with the nightmare of non-revving) and bring my own bike. Concert was a Tuesday (5.21), so I left home early Monday morning. I drove most of the way out to Dubuque, Iowa, where I spent the night (a lot cheaper than the Madison area).

Tuesday morning, I woke up early (again) and drove into Verona, where the loop portion of the IMoo bike course starts. I had every good intention of riding the course, but it was INSANELY windy. Not pouring rain like I had thought it was going to do, but windy enough that I didn’t feel safe going out on an unfamiliar course by myself. So, I made the tough decision to not ride and just drive the bike course. It’s going to be painful, but it will be a beautiful pain since it was fairly pretty through the farmland.

I had brought my bike trainer to get in miles that way instead, but when I got done driving the course and checking into the hotel, I didn’t have a lot of time before meeting a friend for lunch. Lunch took a while (which was fine; I hadn’t seen this friend in person in almost a decade) … so with how tired I was and full after, I didn’t get on the treadmill, either. Oops. I just decided to flop and rest until it was time to head into downtown Madison for the show.

The show was at what is apparently a brand new venue, the Sylvee. 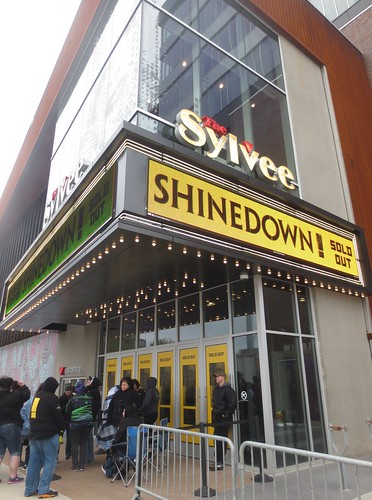 VIP was let in at 3:45 … or what ended up being like 15 minutes later. Stuff got delayed as, we found out later, bassist Eric Bass was having back issues so he skipped the meet and greet in order to hopefully be able to perform later. B had collected airplane trading cards (that his company gives out to kids) for him as at our last m&g, Eric said he was a giant airplane nerd. I ended up giving them to drummer Barry Kerch instead, and both he and staffer Matt said Eric was going to love them.

I had a good chat with Barry regarding grills, a better experience with guitarist Zach Myers, and got selfies with everyone (them and lead singer Brent Smith).

Plus the photo with everyone was a lot more fun than last time. 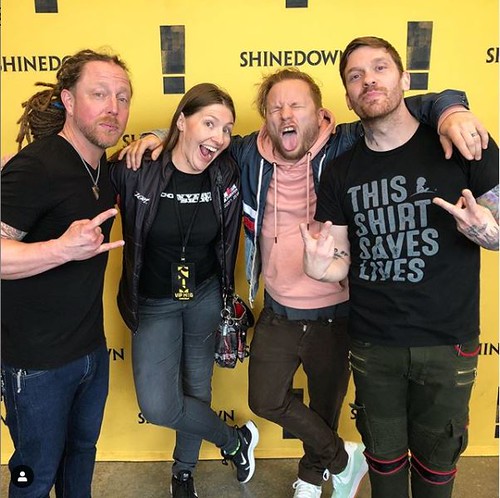 Of note: when I checked in at the door, I told the staff that it was just me and the second person I bought VIP for didn’t make it. She said to take the extra lanyard/laminate anyway. I noticed after I walked through the door that a pair of friends was being split up since only she had VIP and he didn’t … so I gave him the extra laminate so they didn’t need to be split up. They were both so thankful that both could experience VIP and hey, I wasn’t going to need to keep the other one anyway. 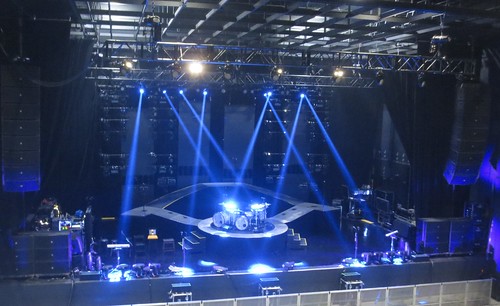 Stage all set up.

What I didn’t like about this M&G was that we got booted back outside the building until closer to doors open. We still got priority entry into the building, but we couldn’t stay inside like we could at Pepsi Center. Now whether this is because there weren’t any opening acts or due to it being Wisconsin (someone else mentioned a similar thing happening at a different show there) … I don’t know.

I didn’t really have enough time to grab dinner anywhere decent, but I did have enough time to dump the swag backpack off back in my car, grab some almonds out of the can I brought with me, and then head off to the gas station across the street to get a quick snack.

We were eventually let back into the venue (late again) and I busted booty over to the merch stand for the show-specific pick pack. That purchased, I went to find a spot on the floor. I wasn’t right on the rail, but one person back (… I think the ladies in front of me got in earlier than they were supposed to “well the other doors were open so I just let myself in” … yes, they were open for people who paid a lot kthx).

The show itself started late … and when it did, it was the same three band members to come back out. Apparently poor Eric has six (!) herniated discs and although he took a lot of drugs/painkillers, he wasn’t well enough to be able to perform that evening (and ended up leaving the tour a day or so later). So, we essentially got an extended Smith and Myers show (with Barry in a killer suit off to the side drinking Dale’s Pale Ale (woooo Colorado!) in a Viking mug occasionally on the tambourine/percussion) for THREE HOURS. Zach also played the piano, we got some random Dracula song …

… it was pretty outstanding.

The setlist on setlist.fm was inaccurate last time I looked (it didn’t have Zach doing George Strait’s “Forever and Ever Amen” on it), but it was massively huge and insane. Think a crazy acoustic sing-along with the occasional light show and fireworks.

I also took a lot more pictures than is my wont due to the nature of the show.

I would also like to mention that they did “Nothing Else Matters,” which now means I have seen that song performed live by three different bands (technically Shinedown, Apocalyptica, and those that wrote it in the first place, Metallica). 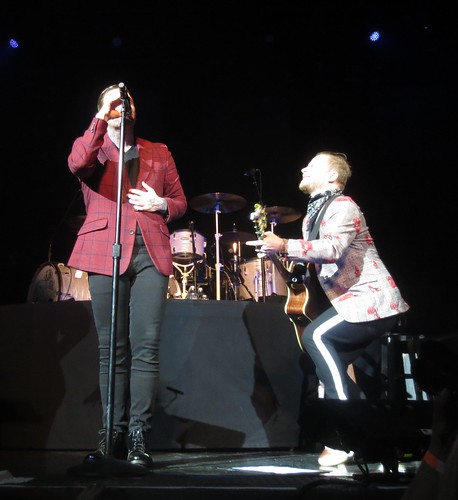 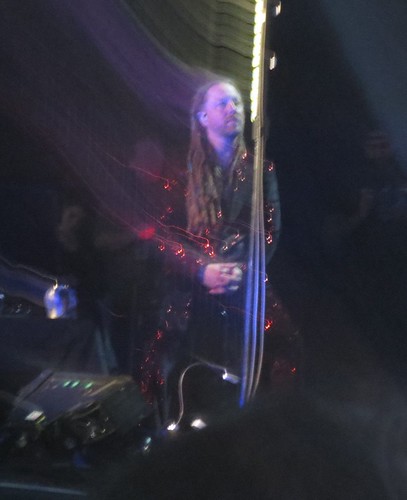 I tried SO HARD to get a good picture of this suit. 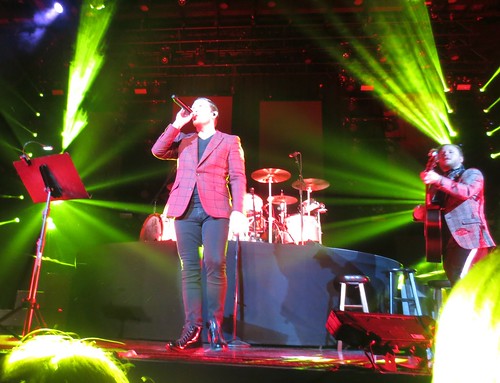 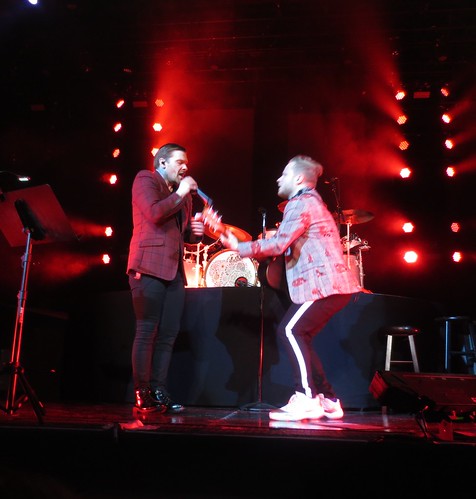 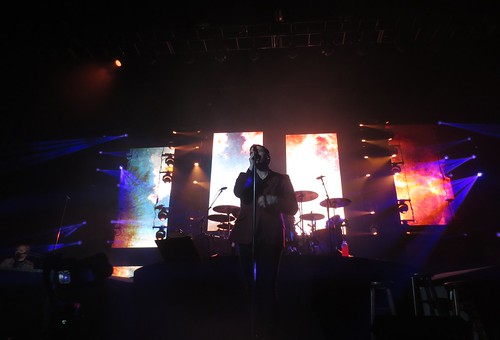 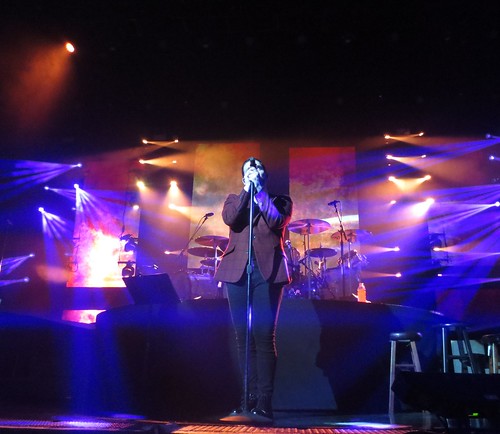 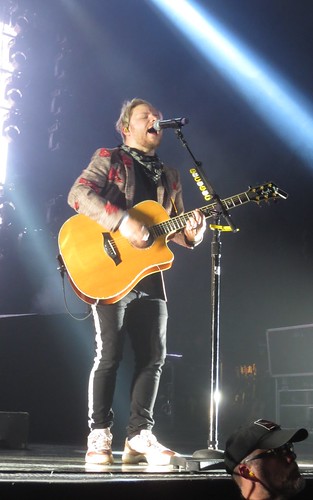 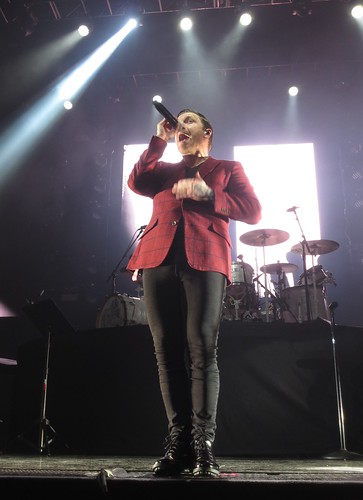 Not your typical Shinedown show, but for doing what they could under the circumstances, it was amazing all the same. I also admire and appreciate their professionalism as they could have easily cancelled the show on us. Instead, we got to see something pretty dang special.