Yes, also known as Shinedown show number 9 for me. I wasn’t originally going to go to this show – we hopped on VIP too late (that is, it was sold out) and so decided to maybe not go to this show. Plus they were touring with Papa Roach and the last time I saw PR was when my cousin Mike was doing sound for them … and Mike passed away this past July so I knew that was going to be hard for me.

However, as it got closer to the show date (and we knew B was going to be out of town), I decided I really wanted to go so I bought myself a ticket. I’m glad that I did – not only because the show was AWESOME, but also because I apparently always see Shinedown the March of an Ironman year. Crazy, right?

Anyway, the show was held last night at the Budweiser Events Center up in Loveland. I mostly know the building as the home of the AHL’s (formerly CHL’s and ECHL’s) Colorado Eagles. Who I still haven’t managed to see in action. Doors were at 6 and I got there a bit before 4. I brought some books to read, but didn’t actually end up reading them – I was on my phone chatting with B a bit and just observing humanity.

Despite being a bit back in the line when I arrived, I managed to be one of the very first people into the venue. I popped down to the merch table by the floor entrance … but they told me that the guitar pick packs (like I bought at the last Pepsi Center show) were upstairs … so I bolted up to that table. Pick packs and a new shirt (because it had “It’s my day to be brilliant” on the back and that’s my IM anthem this year and I’m totally wearing it race morning) and then a stop to the bathroom since I had to pee. I almost went to find food … but decided I’d be okay (reader, this was not a good decision) and went to find a spot on the floor instead.

There was a weird stage setup – the regular stage and then a long runway protruding from the middle that ended in a little square. Well great, where do I go? I ended up going on the right side of the runway more toward the little square which ended up not being a bad spot, but not ideal for guitar picks, sadly. I wasn’t right on the rail, but only one to two people back (there was a mom in front of her kids) so not bad.

First up was Asking Alexandria. I’d heard of them before, but none of their actual music (or if I had, I didn’t know it was them). They weren’t bad, but it wasn’t quite my style of music. Lead singer was hysterical, though, and they did have a song or two that I enjoyed.

I almost had a pick at this show, but the woman in front of me (the one with kids) snagged it off the floor like two seconds before me, so whatever.

The worst part of this show was the drunk couple that barreled in in front of me right as the set started, kept causing chaos (they ended up a bit further to my right by the time Papa Roach went on and I have no idea where they went for Shinedown) and had oodles of sloppy make outs. Learned that it was apparently their engagement concert which, yay, congrats, good for you … but ain’t nobody wants to see that much fucking PDA. 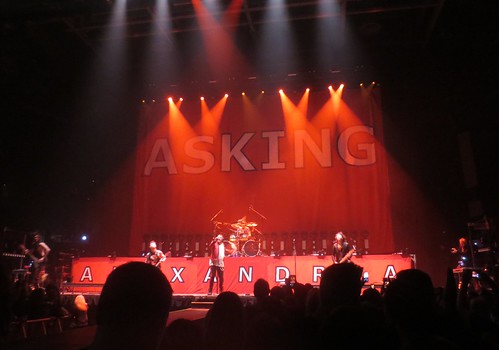 (You can also get a sense to the stage set up here; the mini square is behind me, for reference.)

Next up was Papa Roach. They were high energy back when I saw them six years ago and that hasn’t changed at all. 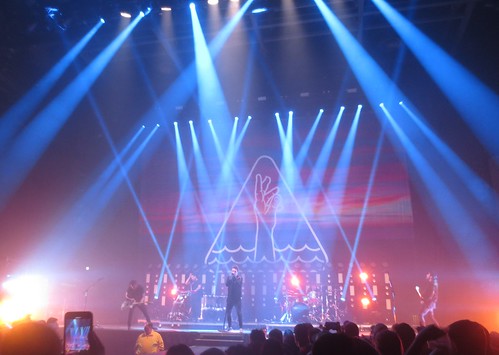 I really need to check the set list from this show and download some more of their music, because damn are they good. Really. Lead singer Jacoby Shaddix is still wandering into the crowd and around the arena and I’m sure he’s still making his sound guy shake his head with exasperation (Mike told me that yeah, it’s great that Shaddix does that, but it’s hard on him to keep the sound good). 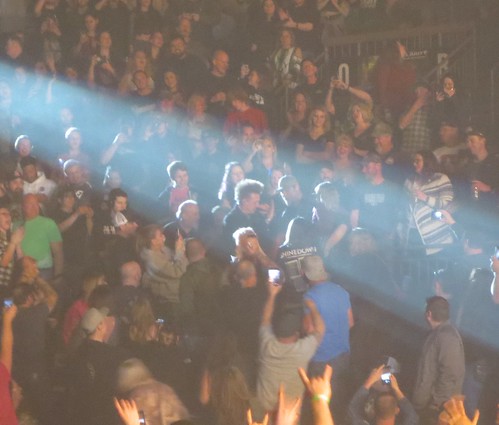 I also almost had a pick – felt it go off my forearm, but a woman next to me was right on it as it hit the ground.

I wasn’t expecting to cry much during Papa Roach – except when I thought of Mike – but damn Jacoby hit me with a small bit of Linkin Park’s “In the End” at the end of “Scars” as a tribute to their late lead singer, Chester Bennington, as it was his birthday. That got me right in the feels.

I miss you, Mike, and thank you for being there.

As for Shinedown … they brought it, as always. Brent Smith’s voice sounded a little different at times, but I think that was due to some new vocal arrangements for a few of the songs. 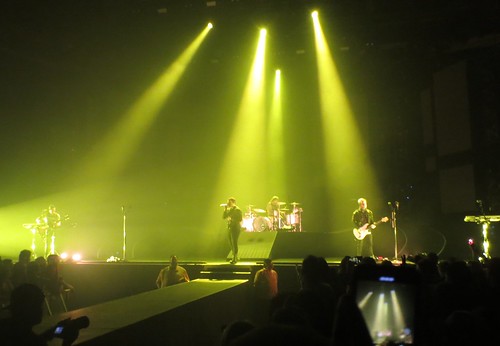 I think I cried through about 50% of this show … but that’s pretty standard for Shinedown shows these days.

There was a bit more downtime between songs … and almost an intermission as they went to the little square … which ended up being a second stage. 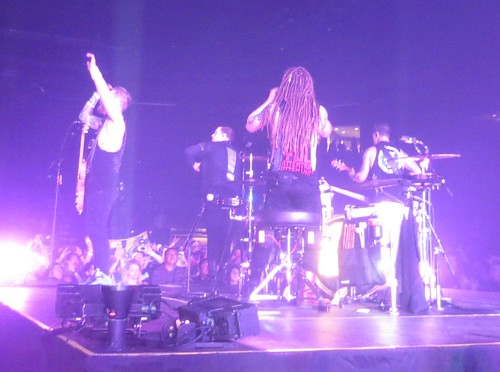 Apparently when they were doing set design for this tour, Zach Myers thought, “why not a second stage?”, so they did it. I enjoyed it as it made a large arena show feel a lot more intimate. Plus it was a great way for them to go off the cuff and be less scripted like they usually are with their large venue shows. Yeah, the tight, clean show is nice, but y’all ARE HILARIOUS. USE IT. And in this, they finally did.

In the small stage set, I guess they’ve been having a band member pick a song for the night for different shows … and, Barry Kerch I love you forever for this (and not only for your coffee), but it was his night and he chose “Call Me.” So I got to hear that for a second time.

(Setlist.fm LIES – we did not see “Misfits” at this show we saw “Call Me” and it was GLORIOUS.)

Shinedown also did something I don’t think I’ve ever seen them do in six years of going to shows – they actually announced the band members. Whaaaat?

Also: while “45” was still just Smith and Myers … Kerch and Eric Bass actually joined them (back on the main stage) for the end of “Simple Man.” Will wonders never cease?

No picks (other than the ones I bought) and none really came towards me. Would have had to have been a lot closer to the main stage for that.

Still, all in all an amazing show and I’m so glad I ended up biting the bullet and going on my own.

Even if I am fucking destroyed today as a result. Concert hangover? Is a thing.