It was hard going down to breakfast at the hotel that morning, seeing everyone in their finisher’s gear, even though we accepted what had happened the day before. Less hard was seeing the ugly finisher’s hats. Justification, absolutely, but whatever.

I would like to give massive props to the lady working the breakfast buffet, as she let me use their kitchen to wash and sanitize all of our water bottles so they wouldn’t be moldy and disgusting when we got home. I’m not sure if she should have let me back there, but I greatly appreciated it.

After breakfast, we met up with Jeremy and Melanie once more before we all rolled out of town. We grabbed coffee at Stone Cup again, because it was just that awesome. We also checked out a local doughnut shop. 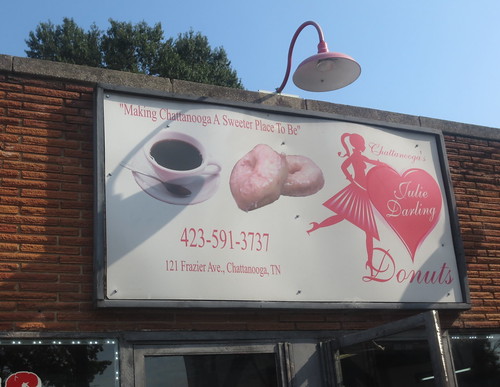 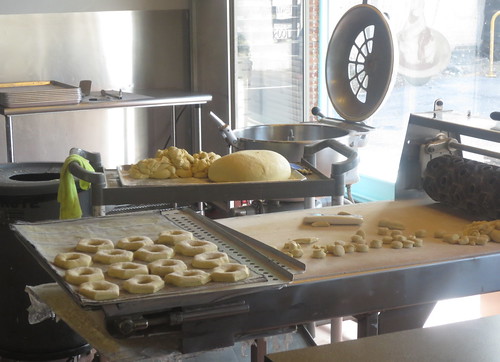 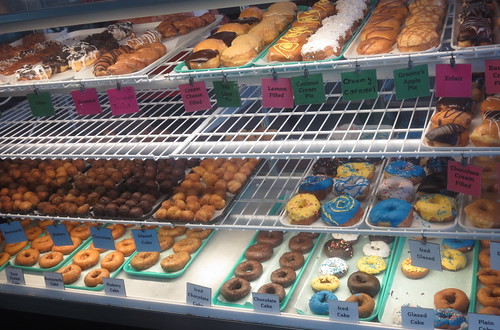 Post-coffee, back to the hotel. I couldn’t find my iPod in the process of packing and was kind of freaking out. I rush to the car to find it, thankfully do … and somehow manage to lock my keys in the car. With my phone. And my purse. Thankfully, Brandon still had his phone, so he called up our insurance (free roadside assistance) and got a locksmith to come bail us out.

An hour later, we were on our way. I wanted to see the Chattanooga Choo-Choo, so we stopped there while heading out of town. 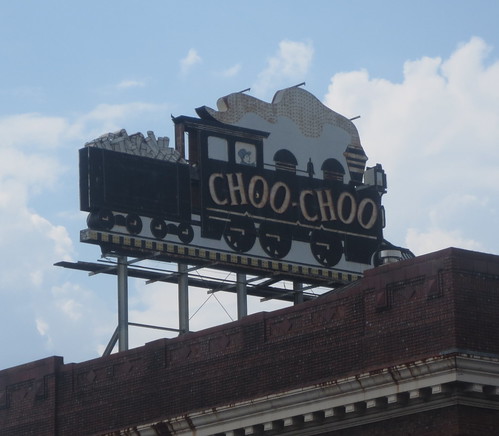 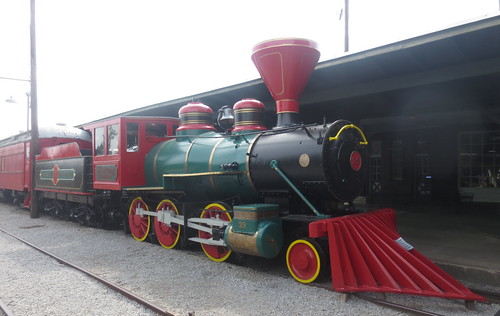 While en route to the highway that would take us to Atlanta, we saw signs for the Chickamauga Battlefield. As I wrongly thought the bike ride would take us through it, I still wanted to check it out. Brandon agreed, so off we went. 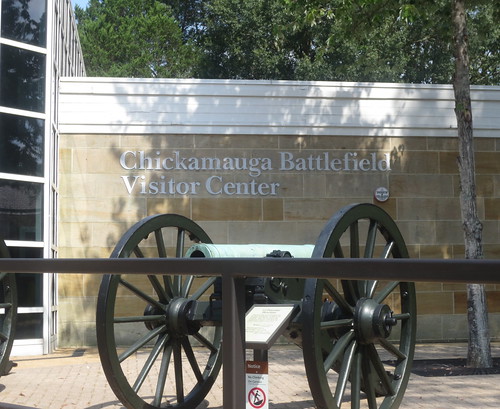 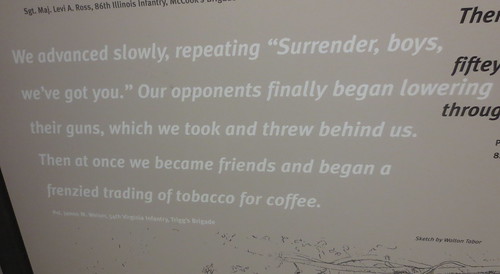 Such the Civil War. 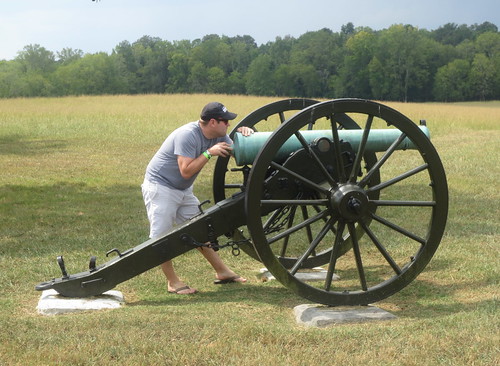 Pretending to fire a cannon. 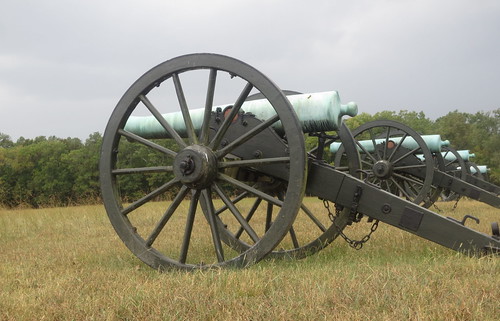 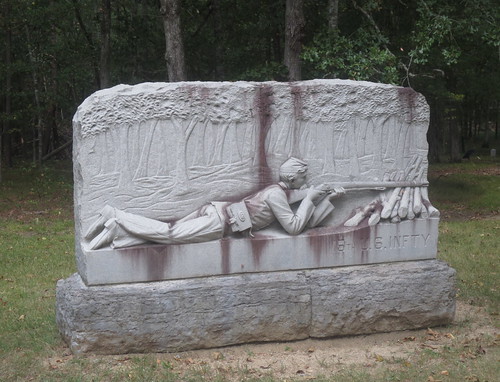 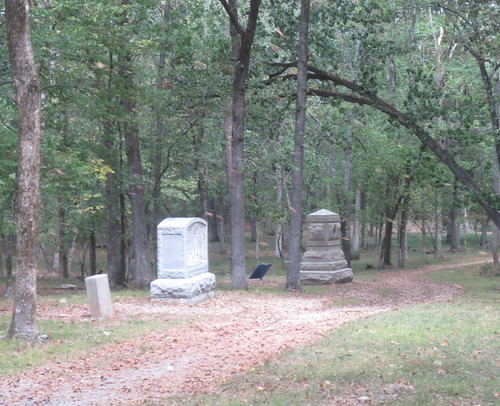 You can kind of see the leaves blowing; a storm was rolling in. 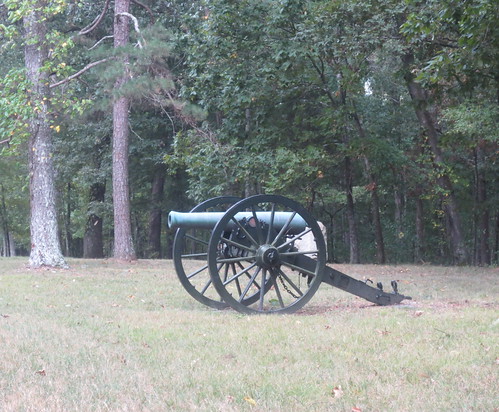 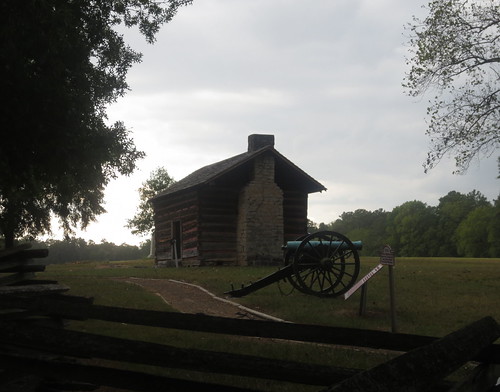 After the battlefield, I asked Brandon if he wanted to see the scene of the crime (the point where his day on the bike ended). He said yes, so we essentially ended up driving the bike course again; this time, in pouring rain. We stopped at a gas station for a snack and then drove to Atlanta.

By the time we got to Atlanta, we were starving, so we found ourselves a hotel and then went out and grabbed some dinner. After that, it was bedtime, as we had a busy day planned for Tuesday.

We left Nashville early … so early that we couldn’t eat the hotel breakfast. Athlete check-in started at 9am, and we wanted to be there as close to time as we could. We did find a Starbucks along the way for some coffee (the essentials, you know) and a snack before winding our way to Chattanooga. The drive is marginally confusing as you exit Tennessee, continue to enter and then exit Georgia, while ultimately ending back up in Tennessee for good.

We arrived in Chattanooga right before nine and we were both STARVING, so we found a Chick-Fil-A on the UT-Chatt campus (okay, so B found one in their student union). Brandon went to grab it while I did loops around campus, ideally finding a place to park, but really just waiting for him to come back out with food. Food gotten (and consumed in the car), we headed to athlete check-in.

We got checked in, saw a few Colorado friends (because why wouldn’t we?), and then decided to drive the bike course. Back into Georgia we went. After that, we could check in to our hotel (Holiday Inn Express off MLK in Chattanooga), so we did that and went for a short run back to Ironman Village and downtown so we could eat lunch. 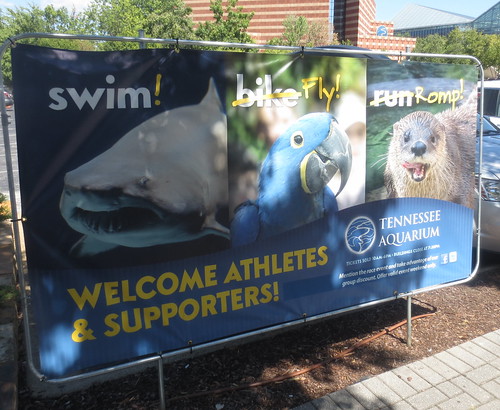 The town really embraced the event.

Lunch was at a place called Puckett’s. Ironman works out a deal with some of the local restaurants where we athletes each get a $25 food voucher to use. Since there were two of us, we got two vouchers. Puckett’s, right next door to the aquarium, was one of the places on the list, and used to be an old grocery store back in the day. 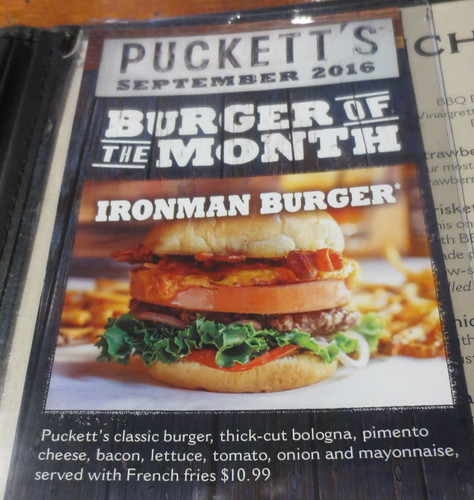 We did not eat this.

After lunch, it was back to the hotel for a bit. 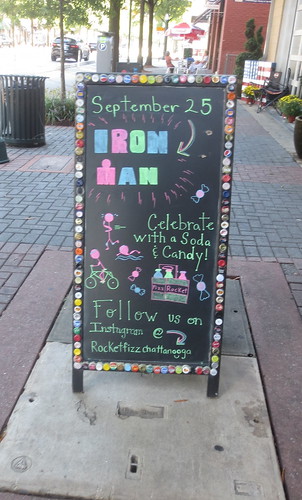 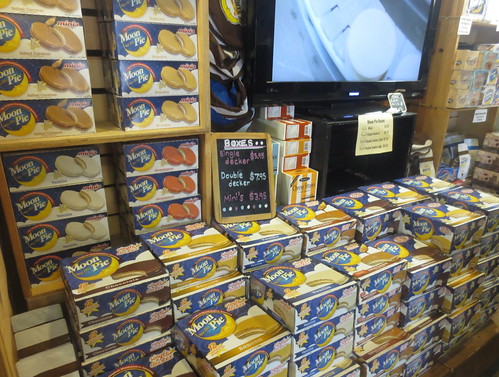 Choo, home of the Moon Pie.

We grabbed dinner with a friend from Colorado, George, and a few of his buddies later on at an amazing sushi restaurant called Totto.

The start of our fifth day was us waking up late for a practice swim in the Tennessee River, but we still managed to get to it in enough time. Post-swim, we grabbed coffee at an awesome little place called Stone Cup Cafe (great bagels. Highly recommended).

After the swim, we hung out until lunchtime, at which point we wandered back downtown for a bite to eat. Our friends and cheer squad for the weekend, Jeremy and Melanie, arrived in town and met us after lunch to hit up the aquarium, which we had heard great things about.

The Tennessee Aquarium is divided into two buildings (well, three, if you include the IMAX, which we didn’t go to) – a River Journey and an Ocean Journey. I personally enjoyed the Ocean Journey better, but both were quite good. I might put this aquarium on my list of top aquariums, but there’s a few I’d need to visit again to be sure … 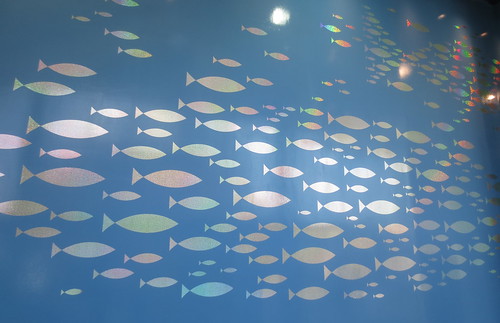 Wall in the Aquarium. 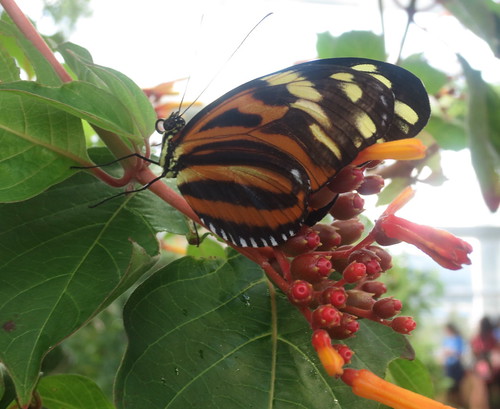 Butterfly. They had a room with butterflies flying around everywhere that you could walk through. 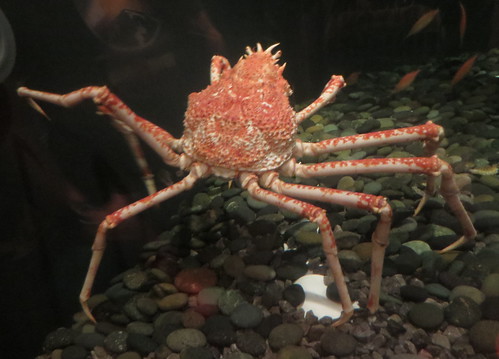 Japanese spider crab. You see these and it’s no surprise why Japan made/makes so many monster movies … 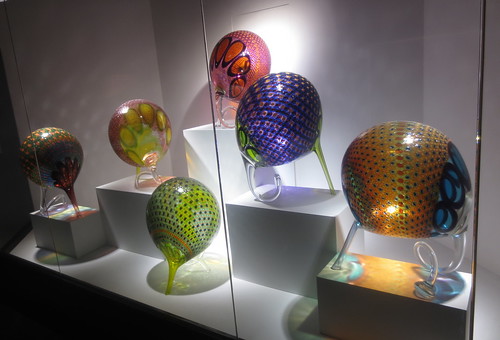 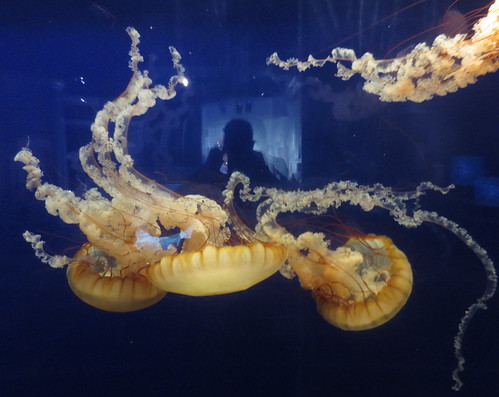 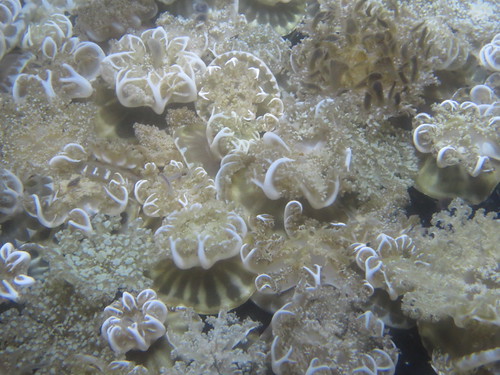 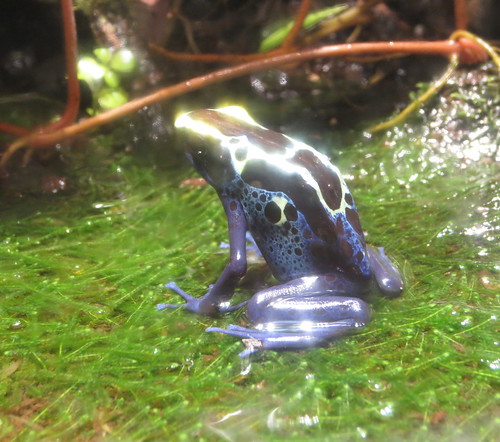 After the aquarium, we split up for a bit before reconvening for dinner at a place in St. Elmo, just outside of town. 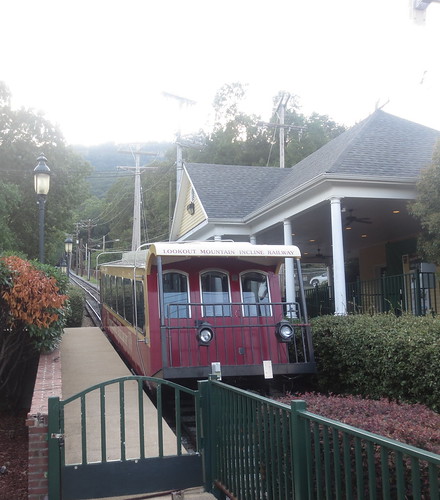 Lookout Mountain Incline Railway. We did not ride this. 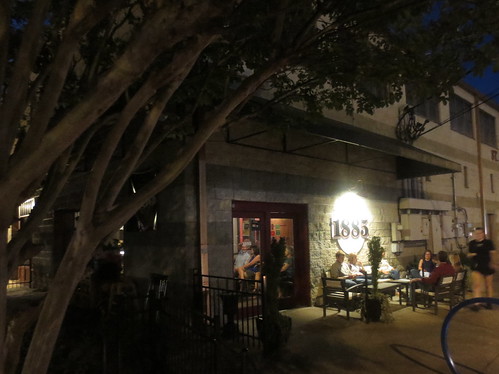 Brandon and I woke up fairly early on Saturday as we needed to run a couple of errands: Chick-Fil-A for chicken minis (bike nutrition), CVS for more sunscreen, a grocery store for bike special needs stuff, and a bike shop for an extra spare tube and CO2 cartridges (just in case). Errands completed, we headed back to the hotel to prepare our bike and run gear bags which needed to be checked in that day.

Bags packed up, we loaded them and a change of clothes onto our bikes and took a quick spin down to transition to get the legs moving. We also stopped by the Quintana Roo tent to get Brandon’s rear derailleur checked out. Bike fixed, we dropped off our gear bags and bikes, threw on normal clothes, and met Jeremy and Melanie for lunch. 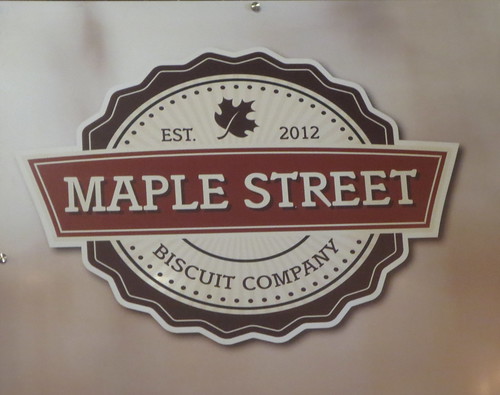 We split up from them and headed back to the hotel to put our feet up … with a stop at Jimmy John’s along the way for more bike food for Brandon. 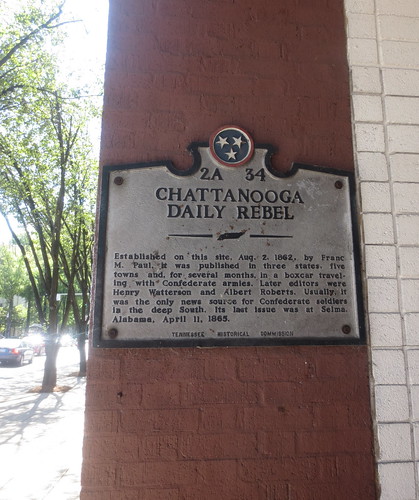 The history and journalism nerds in me appreciated this. 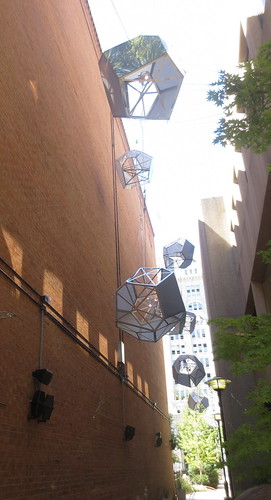 Art in an alley.

We ventured out to dinner at a diner down the street from our hotel (breakfast for dinner! pre-race tradition) and got in bed early, as we had to race the next day.

Race day. For knowledge of how the race went down, please visit my tri blog.

The diner we went to the night previous ended up being dinner again, where I drank beer and ate all the delicious-sounding appetizers I had seen on the menu.