I spent the first week of the new year in Las Vegas. B had an overnight there on the 31st and we were planning on being there the subsequent weekend for some college hockey … so instead of me flying in and out of LA twice and driving his car back and forth across the desert, we just decided to have me drive out and live there for a week.

(As I also wanted to get my first full week of Ironman training down, this was a much better plan.)

I left on December 30th and drove to St. George, Utah, where I spent the night at a Fairfield. And had a band-aid (or breathe right strip, or SOMETHING) in my shower. And the hotel did very little about it (disappointing, because that’s gross).

The 31st, I woke up pretty early and drove the last little bit into Las Vegas. I found a gym to swim at and then found a Target to go pay my bill at. I wanted to paint my nails, but since that’s not something you really do in a public place (smells) and I didn’t want to pay for a manicure … I just decided to do it in my car since hey, I had nothing else to do until B got in. I also read a book at the same time and that took up several hours.

At this point, I was fairly hangry, so I drove over to the MGM Grand, parked, and went into their food court and ate a Raising Cane’s knockoff that was pretty terrible. I then went back to the car to time it so I got to B’s tower at the Signature the same time he did. This worked well. Both of us were still pretty hungry, so I showered, we got changed, and we headed over to the Bellagio just to eat their buffet for New Year’s Eve (didn’t want something SUPER fancy or to fight with reservations).

As they were closing down the Strip for the festivities after we finished, we got to walk back free of crowds down the middle of Las Vegas Boulevard, which was pretty cool. 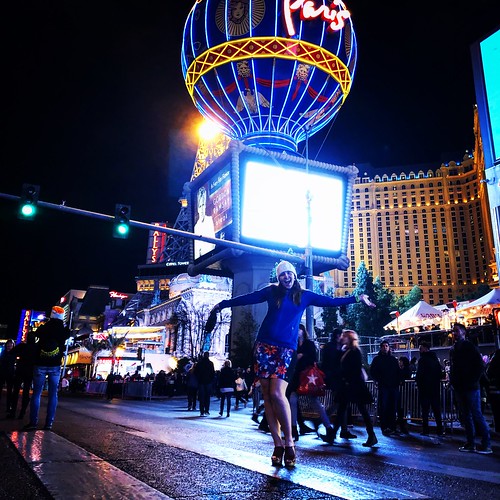 Tub beers, and then bed after we saw the east coast ball drop.

We woke up pretty early on January 1st (not easy since the midnight fireworks definitely woke us both up). I was hoping to catch the sunrise … which I technically did, but it was crap. Our run wasn’t bad, but it was surprisingly cold for Vegas. 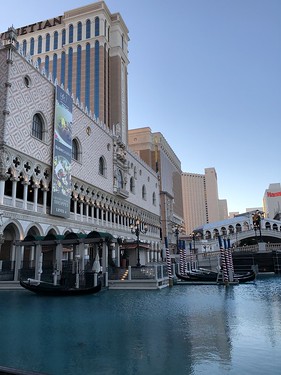 The Venetian, nice and quiet and pretty.

We grabbed some coffee at Starbucks and then headed over to the Cosmopolitan for breakfast at Eggslut (and a donut at District Doughnuts). 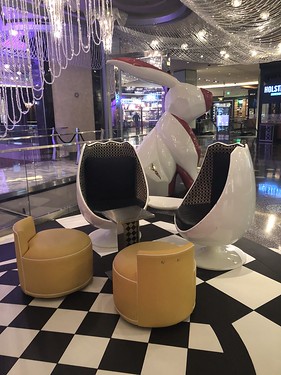 We didn’t have too much time back at the hotel before B had to leave, but enough time to spend some together.

He left, and I packed up and headed to Cafe Lola to get a lot of stuff done and spend a few hours. I started off with one of their amazing cappuccinos and, I forget the name of it, but some outstanding Portuguese pastry.

I stayed so long that I ended up eating lunch there, too. 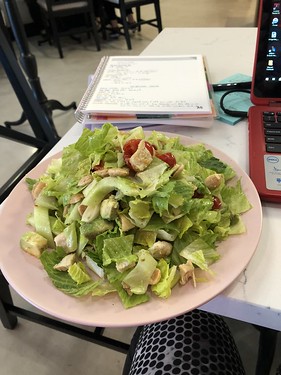 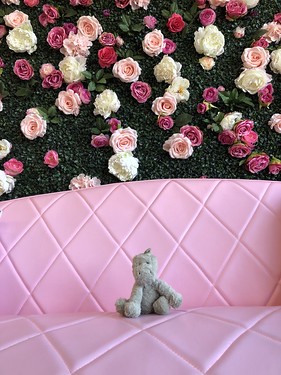 Sometime mid-afternoon, I headed over to the house of a pilot friend of B’s who lives in North Las Vegas, my home base for the next few days. Said friend and his wife were only around for a bit, as they have Vegas Golden Knights season tickets and there was a game that night, but one of their sons was in town for the holidays, so I hung out with him and his boyfriend (and the dog, Reggie) that night. Dinner was some insanely massive calzone from a pizza place nearby.

I woke on the 2nd much later than I would have liked, but whatever. Clearly I needed some sleep after a very stressful holiday season. I went and swam … and was very hangry during/after, so I ate brunch at a breakfast place near the house called the Cracked Egg. 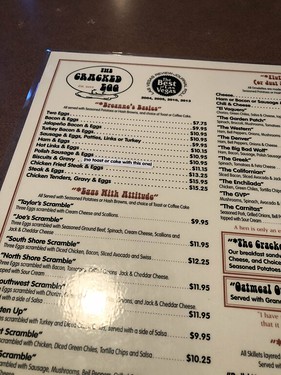 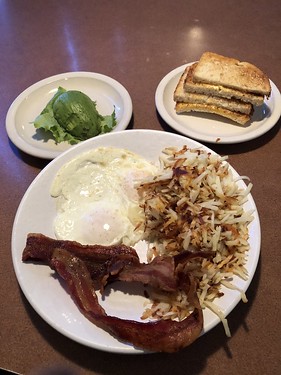 Foooood. Got the avocado for some green and ended up making my own avocado toast. It was pretty delicious.

I did a bike ride that afternoon and then did a lot of admin stuff at the house before venturing back out for food (and chamois cream). The drive took me over to Summerlin for the bike shop … and dinner just ended up being at a Whole Foods. I did, however, decide to try the cookie shop that was right near the Cracked Egg – Crumbl Cookies. 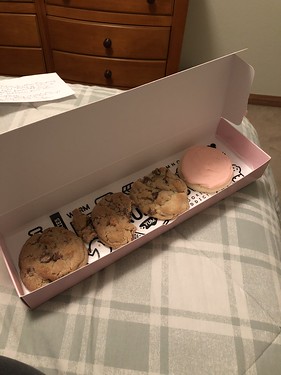 They had oatmeal chocolate chip, which I was super excited about since that’s my favorite cookie and hard to find … but it had the spices of an oatmeal raisin cookie, which, IMHO, don’t belong when you swap the raisins out for the superior chocolate chips. The chocolate chip cookie was SO GOOD – definitely the best of the three I tried. The sugar cookie wasn’t bad … but too much frosting. I am barely a frosted sugar cookie person as it is, so frosting basically the same thickness of the cookie? Too much sugar.

Woke up the 3rd and kind of lazed around … so much so, that I had to scrap my original planned run location and find a park closer to McCarran so that I would be able to pick B up on time. I could see the planes landing at the park, so when I got the text from B that they were descending, I could keep an eye out for his plane (and did indeed see it). Thankfully, though, I was able to finish my run as planned and pick him up without him waiting too terribly long for me.

We went to Cafe Lola after I picked him up because he was not NOT going to have one of their cappuccinos himself. I had another of the Portuguese egg pastries and he had some of their oatmeal. 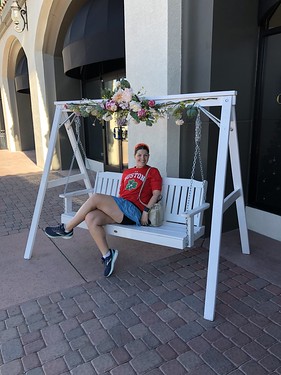 On the swing outside.

From there, we found a much better trail and went for a ride. Grabbed a quick bite after before heading to the Bellagio (our happy home for the rest of the trip). We showered, walked over to T Mobile Arena to purchase tickets for the Ice Vegas Invitational (whole reason we planned the trip), and then met up with his cousin and his husband over at the brand new Eataly that opened up outside of Park MGM. 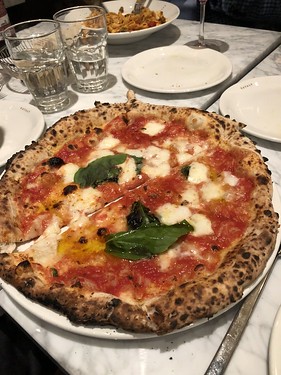 Woke up on the 4th, ate at the buffet for breakfast (we found a package that gave us breakfast credits every day), got coffee … and I threw $40 into a slot (Heidi’s Bier Haus) and cashed out with $205. Nice morning. We then drove out to Henderson to ride some more. There’s a trail that got meh reviews due to the nature of it being pretty much right by the highway, but we thought the Union Pacific Railroad Trail was actually quite nice to ride on. Sure, quite a bit of it WAS boring, but it ended up opening up on some other trail right outside of Boulder City and it got great. Very nice way to get in 20 miles.

Got a bit hangry after that, so just grabbed food at Chick-fil-a for some calories before heading back to the Strip. Showered, grabbed a cappuccino at Cafe Gelato inside the Bellagio, lost a bit at Heidi.

Dinner pre-hockey was at In-N-Out … where we amusingly sat in the same booth we sat in back in September with our friends Blair and Jenna-Caer. 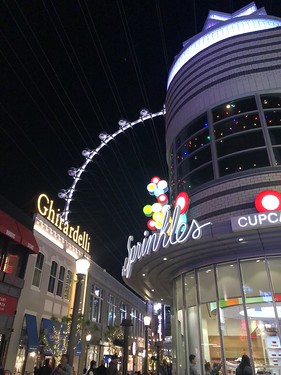 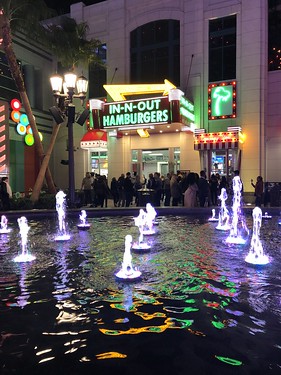 Night at the Linq. 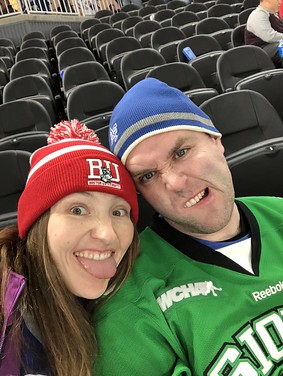 Us at the game.

We skipped the first game of the night – Western Michigan vs. UConn – because all we really cared about was the Air Force/St. Lawrence game. Happily, Air Force won (and we got to see some sled hockey in intermission).

The 5th was another run day, so after another buffet breakfast, we drove back to the same park I ran in the other day. I wanted to go to the Cafe Lola pop-up shop in the Macy’s in Fashion Show, so we headed there after the run. 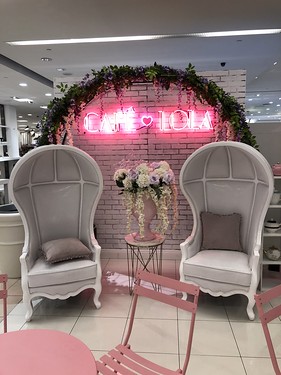 Once we got back to the Bellagio, it was spa time which was vastly needed by both of us.

Afterwards, we headed down to the Vegas Golden Knights’ store to see if there was any merch for the tournament – unfortunately not.

A lot of this was because I had been feeling unsettled all day (and a bit the previous day too if we’re being honest). I finally just wondered if puking would help … and so I did that. First time I’ve thrown up in probably about six years (probably since my last concussion). It was gross, and it hurt (and I burst a blood vessel in my eyeball), but it did make me feel better, so mission success?

Dinner pre-game was at the buffet (ugh I know again) and then we got ourselves a nice treat of Ghiradelli sundaes.

Air Force unfortunately lost to Western Michigan, so our teams are currently 0-2 in championship games in tournaments in random places that we’ve traveled to. Thankfully UND doesn’t go anywhere this year for us to see them lose. 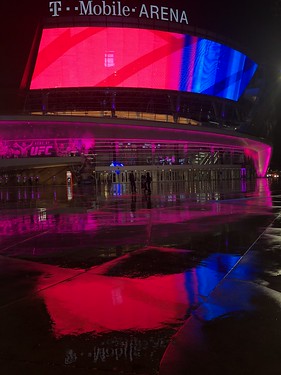 The original plan was to swim on our way out of town, but I still felt kind of crappy and I didn’t want to suction goggles over my weird eyeball … so that didn’t happen. We grabbed breakfast at Sadelle’s, a new restaurant in the Bellagio (off the conservatory, where Cafe Bellagio used to be), and then gambled a bit more before checking out. Which ended up being smart, since we both ended up winning a bit more.

We checked out, got coffee on our way out of town, stopped at Red Lobster in St. George for lunch, and drove through a lot of foggy crap to stop for the night in Grand Junction.

The drive home the next day was terrible thanks to a lot of snow (and an hour and a half to get through the tunnel), but overall, it was a nice trip to start the new year off on.