We rolled into Grand Forks fairly late after driving up from the Twin Cities, so he took me to one of his favorite pizza places, SlapShot. 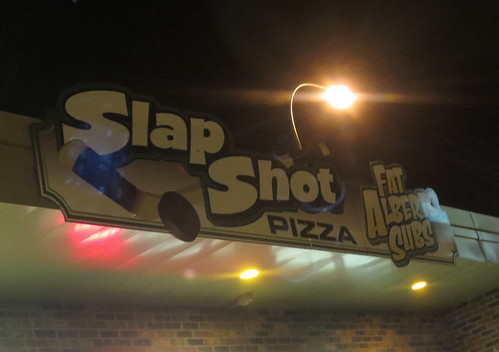 We grabbed our food to go and headed back to the hotel. 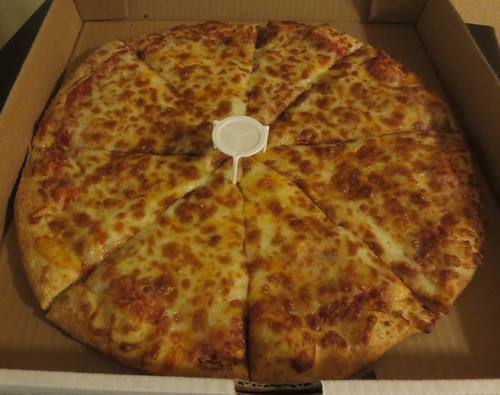 We got a plain cheese pizza (easier to tell if it’s plain). Definitely not as good as say, T. Anthony’s, but it was also a different type of pizza. Still pretty tasty, and they got points for using the plastic pizza table. 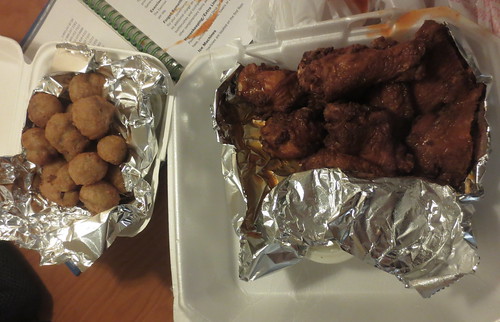 We also got some sides. I’m a sucker for a good fried mushroom (theirs weren’t bad) and Brandon got the wings (good flavor; too spicy for me as per usual).

We had general breakfast at the hotel (wee, free!), but then went to grab coffee at Tim Horton’s, because Canadian coffee is awesome. 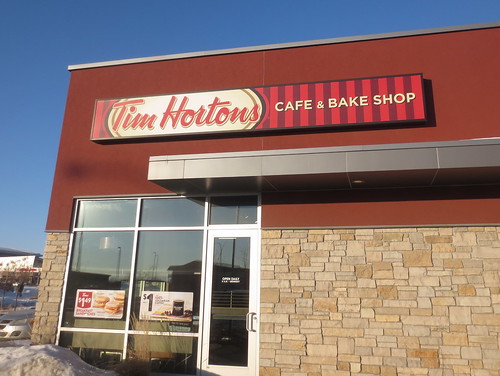 Their iced coffee was actually way too strong for me and didn’t have enough ice for me (I’m weird – love a lot of ice and a lot of cream). The chocolate-frosted doughnut though? On point, with some of the most amazing chocolate frosting ever on a doughnut.

Lunch was at Grand Forks institution, the Red Pepper. 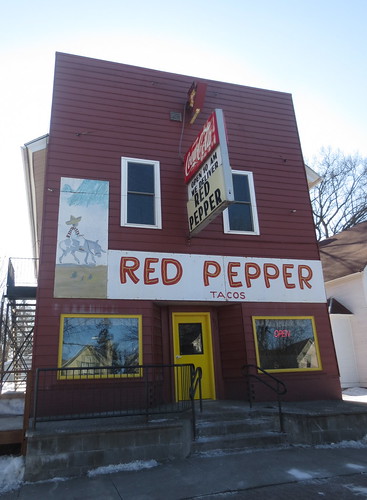 Brandon had their famous grinder (which I’ve tried, but just don’t like). 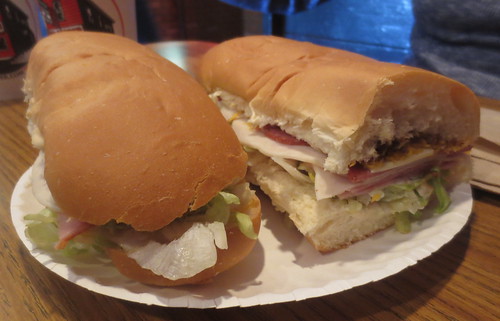 Me? I went ahead and got one (okay, two) of their tostadas, but without the hot sauce. 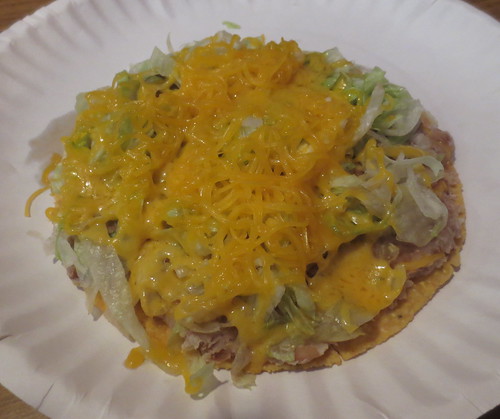 Dinner before the game was at The Blue Moose, in East Grand Forks (so the Minnesota side of things). 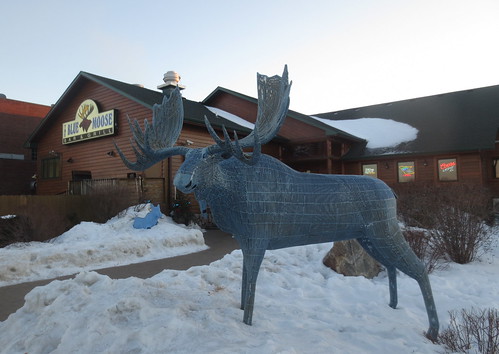 B had raved about their Spinach Dip, but it looked way too spicy for me, so unfortunately, we didn’t get it. Instead, we got the following: 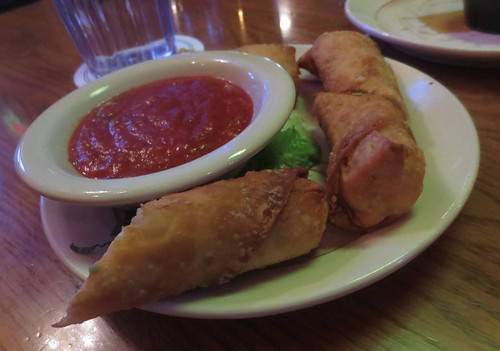 Part of their seasonal menu, these are the Pub Cheese Snacks – “Four cheeses mixed with herbs, green onions, and sour cream. Quick fried and served with marinara.” We got ranch as well. They … were okay. Almost like a hybrid cheese stick/egg roll. Definitely original. 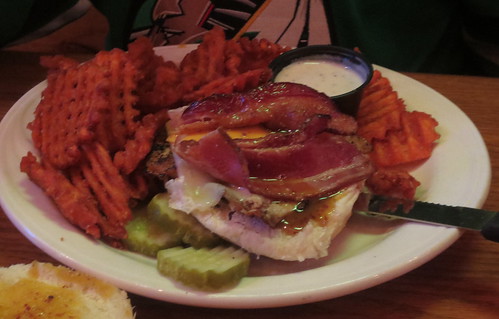 Brandon had the Honey Clucker – “A succulent chicken breast topped with bacon, melted American & Swiss cheeses, finished with our own honey mustard sauce.” It was okay. I’ve had better versions of this same sandwich. 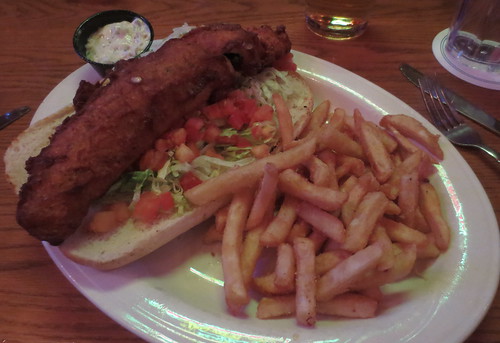 Me? If I can get fish sandwich (my name for walleye sandwiches), I will order a fish sandwich. Similar philosophy with me and lobster rolls, really. Anyway, their Walleye Sandwich – “Beer battered walleye fillet served with a slice of lemon and tartar sauce. We catch ’em, you eat ’em!” The tartar sauce had a dill in it … which if you know me, you know I’m not the biggest fan of dill. The walleye also looked overcooked (even if it actually wasn’t), which wasn’t appealing to the eyes. It tasted fine, but it definitely wasn’t my favorite fish sandwich I’ve ever had.

Later that evening at the UND game, we split a coffee and some doughnuts from the Tim Horton’s stand.

Breakfast was basically the exact same as Friday – hotel and then off to Tim Horton’s. This time, though, we skipped the regular doughnuts in favor of Timbits. 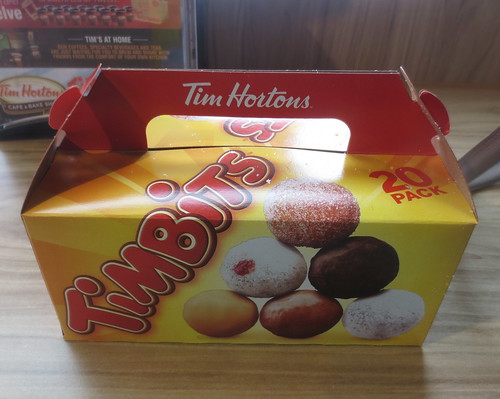 No pictures of lunch (too hungry to not just dig in), but it was at Green Mill. Which isn’t local to the Forks, but it is to the area. Brandon loves Green Mill but rarely gets a chance to go there, so that was lunch. We each had a salad and then devoured a pizza. It was awesome.

Our late lunch meant we just snacked at the Ralph, so “dinner” was popcorn and then Little Caesar’s Crazy Bread. Mmm, Crazy Bread.