I was wondering a bit on how to do this, and after much thought, I decided that a day-to-day “food journal” type thing would be the easiest for this part of the story. Because seriously, we ate. A lot.

Day One: 9.19
– Eggs at the house.
– Some Bantam bagels (and coffee!) at Starbucks.
– Free doughnut at King Soopers (thank you for winning, Broncos).
– Snacks in the car.
– Lunch at Iron Skillet (used to eat here a lot on road trips as a kid; not doing that again …).
– Chocolate shake from Steak ‘n Shake (made it during shake happy hour. Score).
– Delicious home-cooking at Norm and Emily’s.

Day Two: 9.20
– Breakfast at Norm and Emily’s.
– Coffee at Starbucks.
– Car and gas station snacks.
– Lunch at Waffle House.
– Dinner at Cracker Barrel (not as bad as I remembered; it had been a few years since we had last eaten there). 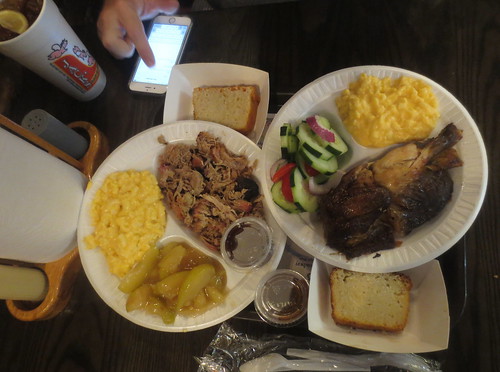 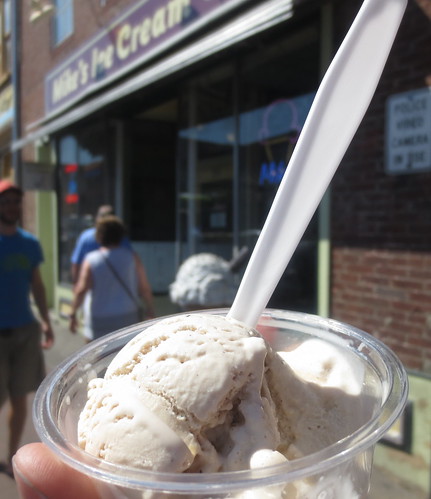 (I may have added hot coffee on top of this coffee ice cream …)
– Dinner at some crappy burger place (Stax) in the Opryland Hotel and Convention Center complex (NOT recommended).

Day Four: 9.22
– Breakfast at Starbucks and Chick-Fil-A.
– Lunch at Puckett’s in Chattanooga. 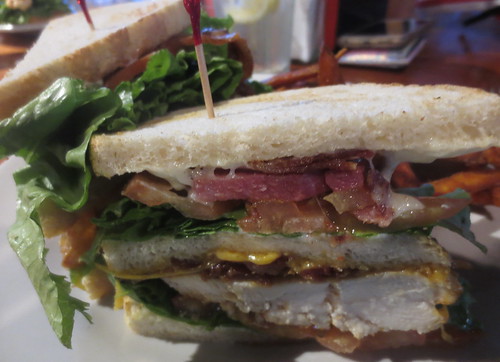 (Wasn’t bad. Don’t necessarily know if I’d return, but it did the trick.)
– Dinner at Totto Sushi (HIGHLY recommended. There were five of us, we ate (okay, mostly George ate) obscene amounts of sushi. They comped us an appetizer AND mochi ice cream. Fantastic service, tasty fish. GO.).

Day Five: 9.23
– Hotel breakfast.
– Coffee and bagel at Stone Cup Cafe, Chattanooga (recommended. Good coffee and one of the best bagels I’ve had in a long time).
– Lunch at Blue Plate/Local 191, Chattanooga (had a portobello sandwich. It was good, and I don’t know if it was because we were on the bar side of the restaurant, but our service was TERRIBLE. It took forever to get our food. Probably would not go back).
– Dinner at 1885 Grill, St. Elmo (DELICIOUS. Kind of expensive, but completely worth it. I had salmon, Jeremy had some sort of etoufee, Melanie had grits with something, I forget what Brandon ate, but we all loved our meals).

Day Six: 9.24
– Hotel breakfast.
– Attempted coffee at Chattz (so I like local coffee shops in general, but the girl working was totally rude and the (bottled) cold brew was way too strong. Waste of my money).
– Lunch at Maple Street Biscuit Company, Chattanooga (okay, so this place was really cute. The name for your order was the band you’d like to go on tour with. The food was tasty, too). 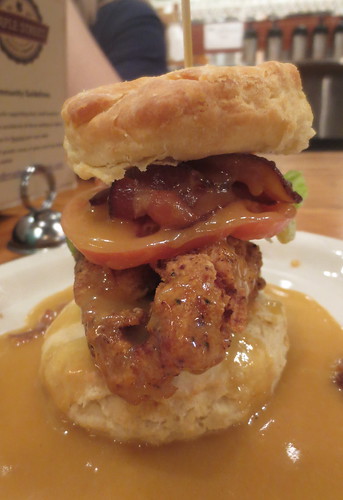 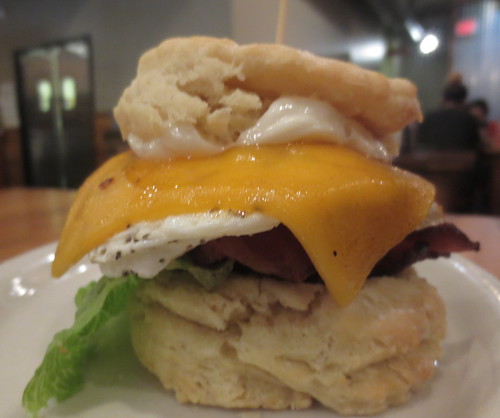 (My biscuit.)
– Breakfast for dinner at City Cafe Diner.

Day Seven: 9.25
– To go breakfast from City Cafe Diner (liked this place the night before, but it almost took too long to get our food that morning …).
– Bike course buffet (… Ironman. you eat what you can).
– A lot of fried crap at City Cafe Diner (bacon cheese fries were sadly disappointing, but their cheese sticks were good, and the fried mushrooms did the trick).

Day Eight: 9.26
– Hotel breakfast.
– More coffee and bagels from Stone Cup Cafe.
– Doughnut holes from Julie Darling Donuts, Chattanooga (so we like doughnuts, but these were disappointing. I couldn’t do a chocolate-frosted, because they do a chocolate-frosted glazed, which is just a no in my book. So, we tried some of the donut holes – sour cream, buttermilk, regular glazed – the glazed were okay, but the other two? Probably would not go back …).
– Gas station snacks.
– Taco Bell (when you’re hungry …).
– Hooters for dinner (all you can eat wings were fantastic …). 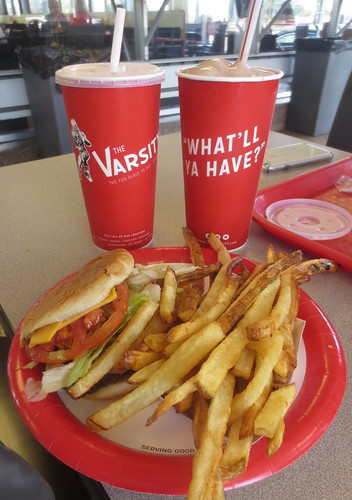 (Varsity orange drink was … not good. Chocolate shake was okay. The cheeseburger was nothing special and the fries were above average. I get the local appeal … but I’d prefer In-N-Out over this.)
– Gas station snacks.
– Hotel dinner.
– Ice cream at Kilwin’s, Asheville. 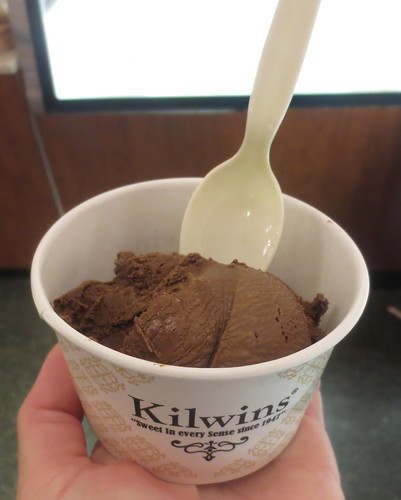 Day Ten: 9.28
– Hotel breakfast.
– Iced coffee from Green Sage Cafe, Asheville (cute little place downtown).
– Snack from Old Europe Pastries, Asheville (shortbread, not good. Croissant, delicious).
– Gas station snacks.
– Lunch at Buffalo Wild Wings (they have a salad I like. I needed greens).
– Fries and a chocolate shake from Jack’s, Alabama (so. Chocolate shake was good (real chocolate ice cream!). Fries were different, but good (I swear they use that artificial butter flavoring stuff that’s on microwave popcorn on their fries). Not good was the fries IN the shake. That was a fail).
– Dinner at Corky’s, Memphis. 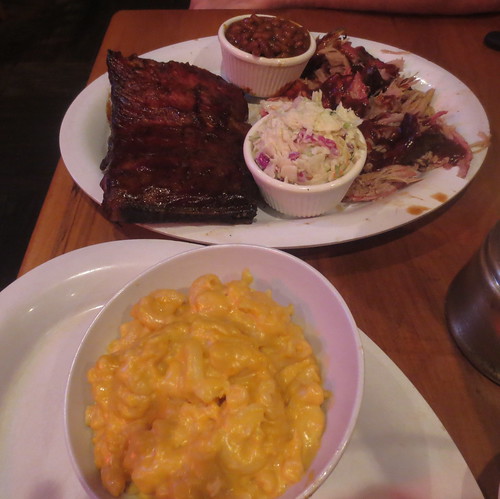 (Pulled pork? Tasty. Ribs? Best I’ve had in YEARS. Cole slaw? Tasty. Mac and cheese? Ehhh … but the rolls were on point. Out of our two BBQ stops, I’d suggest Corky’s for ribs for dinner.)

Day Eleven: 9.29
– Hotel breakfast.
– Iced coffee and Bantam bagels at Starbucks (can you tell I’m addicted to those stupid bagel bites?).
– Lunch at the Germantown Commissary. 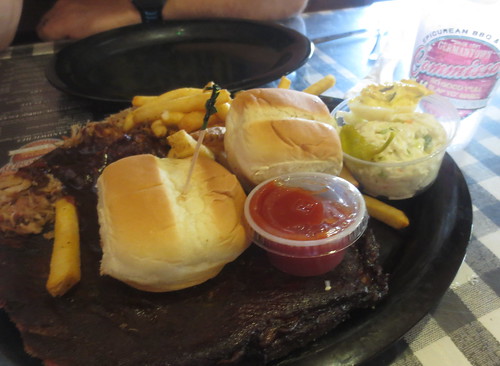 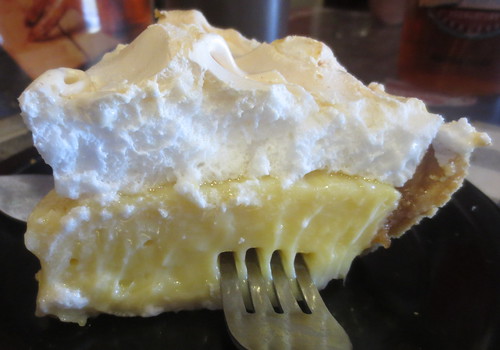 (While it wasn’t the best I’ve had (too relish-y?), the deviled egg was a nice touch. The pulled pork was even better than Corky’s. The ribs weren’t my favorite, but they were also a dry rub rib, and I now know that I don’t like dry rub BBQ. I didn’t like the cole slaw (but that’s so hit or miss for me anyway), but their fries were fantastic, which is rare for a BBQ place. Go here for lunch to get pulled pork and fries. We got talked into the pie, which wasn’t bad, but not my favorite lemon. Shoulda gone with the chocolate …)
– Olive Garden for dinner.

Day Twelve: 9.30
– Hotel breakfast.
– Lion’s Choice Roast Beef for lunch (needed food, wanted to grab something quickly … we decided on what appeared to be a local St. Louis chain. Think Arby’s, but higher quality. It was … meh).
– Ice cream at Cold Stone.
– Breakfast for dinner at Norm and Emily’s.

Day Thirteen: 10.1
– Doughnuts at Daylight Donuts (I don’t know why we keep trying Daylight, as they’re just not good).
– Gas station snacks.
– Lunch (well, more like brunch) at Pheasant Run Restaurant, Hays, Kan. (So. Food wasn’t bad, but we’re 99% sure we got our food after every single local got theirs, even if they arrived after us. Kind of bullshit. Would not stop by again. We usually like to avoid the chains, but this time, a chain might have been a better option).
– Dinner back in wonderful Denver. Thank you Whole Foods Market and your delicious teriyaki.