(Another in a series about my honeymoon/first anniversary trip to Paris and London, taken from a journal kept on the trip.)

Hello from London! Not much to really write about, as today was a pretty laid back day, all things considered.

The day started out early, as we had to catch a fairly early train to London. We hung around the hotel just long enough to snarf some breakfast … which we found out WASN’T free as we left. Dang near 50 euros for breakfast for the two of us for two days. I should have had about a gallon of oj and 30 croissants each morning for that price.

We checked out and bought our last metro ticket and hopped a train to Gare du Nord. Once there, half the escalators (or more) seemed to be broken, so Brandon groused the whole time (he had two of the three suitcases). Eventually, though, we got to where we needed to be, checked in, cleared customs, got our passports stamped and got on the train. 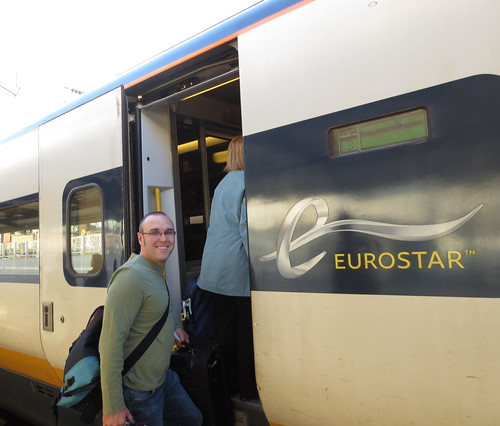 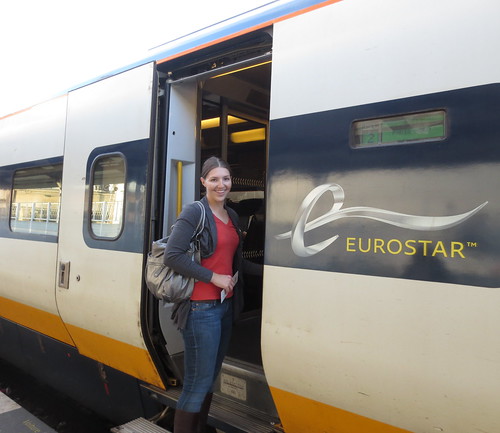 The train ride from Paris to London was fairly uneventful. I was super tired and tried to nap, but was unsurprisingly (for me) unsuccessful. After a while, I just gave up and read my nook. In no time at all, we were in London ready to start the next part of our journey. We figured out where we needed to go, bought a one-way tube pass and hopped the Underground to Green Park and our hotel.

We found the hotel with very little difficulty and, as we were super early, left the bags and went to go get a bite to eat.

We also got few pounds out of an ATM. For lunch, we decided on Pret a Manger, essentially a coffee shop with grab and go sandwiches. I chose tuna and cucumber on a roll (tasty) with some fairly sketchy lemonade and Brandon had a ham and cheese toasty (warmed-up sammich – also tasty). After eating, we wandered back to the hotel and read a little until our room was ready.

When we got our room, we found out we were upgraded to a king deluxe room … possibly b/c of Dad’s uber-Hilton status, but most likely because we mentioned we were on our Honeymoon while checking in. Either way, upgrade for us!

Once in the hotel, we kind of died for a few hours, just relaxing and reading … but it felt super good. We probably could have stayed lazy all night … but our stomachs decided we needed food. We walked down toward Leicester Square before Brandon decided Hard Rock was probably our best option so we backtracked down that way.

At Hard Rock, Brandon had a burger and I had some chicken avocado club … so very touristy and American of us, but meh. Tasty food.

After dinner, we came back to the hotel where I’m currently writing from. We’ll probably just continue to have a lazy day, but I know we’ll have more adventures tomorrow!