B and I recently came back from a 10 day trip to Italy, and it was amazing. I hadn’t been in 20 years and B had never been … and we’d been discussing this trip for years so we FINALLY bit the bullet and did it. As I currently have it outlined, I should be able to get the trip done in five posts – four for the trip and one for the food. This is the first of those posts.

We woke up early Tuesday morning to head to DIA for our 7am flight to JFK. 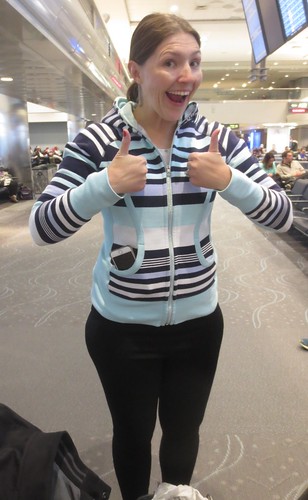 Me at the airport.

I read on the plane, but I also finally got B to watch “Coco,” which we sort of managed to do together. I really do enjoy that movie.

We landed in JFK, got some Shake Shack, and then headed to the Delta Sky Club since we had a few hours to wait before our flight to Milan.

That flight was nice since we were able to get upgraded to Delta One. 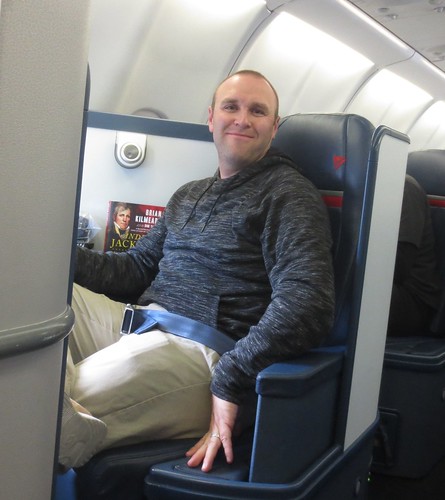 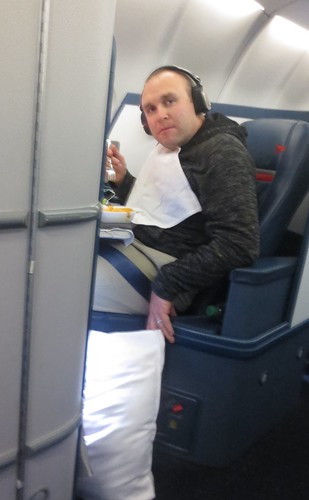 Brandon in his pod.

In true me fashion, I didn’t sleep at all on the flight (except wanted to in the final hour or so when it would have been pointless). I did watch “Cars 3” since B has been bugging me to do so for a while. Definitely not as cute as the original, but not bad. I also watched “Pitch Perfect.” I attempted to journal, but the turbulence was pretty bad so that didn’t happen.

We landed in Milan with me half asleep … and I somehow left my nook charging cable on the plane. I realized it right as I exited the plane and went back on to look … but it was nowhere to be found. I think it got caught up with the Delta headphones (which were picked up immediately apparently …?) and I filled out a lost item report, but, as of today, still haven’t heard anything from it. But it’s okay, because B ordered me a new one on the internets and it got here yesterday.

We got some euros out of an ATM in the airport and then proceeded to catch a train into the city and then the subway to our hotel … right off the Duomo stop. Our room was actually ready within 15 minutes of getting to said hotel, so that was amazing. I got on our internet to figure out why my international data plan wasn’t working (had some setting switched off. Oops.) and then proceeded to take a three-ish hour nap which was NOT intentional, but hey. 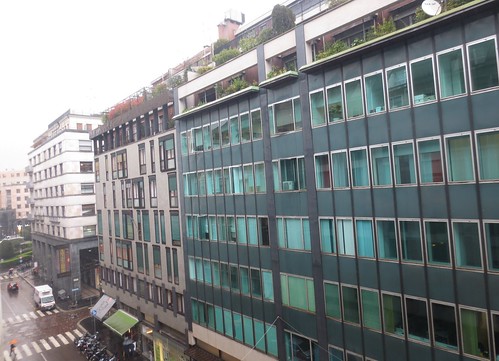 View from our hotel window.

We ventured out in the rain for some food. We tried a grocery store, but couldn’t find anything easy that didn’t require thought/assembly. We then found a sandwich place around the Duomo area which was really delicious. Post-paninis, we had the first of very many Italian cappuccinos. 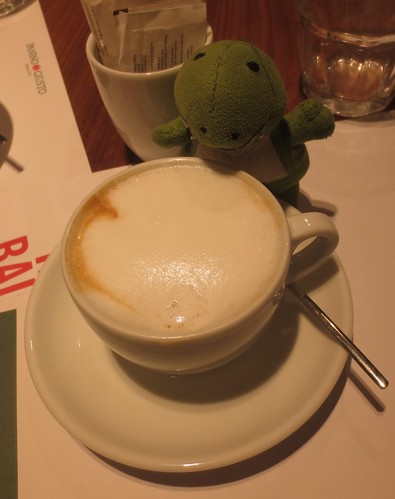 I will say right now that I am typically NOT a latte/cappuccino person. I am iced coffee all the way. But Italian cappuccinos? Starbucks (and, quite honestly, most coffee shops) is complete trash comparatively.

Food eaten, we went back to the hotel to go sleep a lot more.

We woke up relatively early (unsurprisingly) and ate a really delicious breakfast at the hotel. Our hotel actually had a fitness center too (SO WEIRD for Europe), so we hit that up for a super quick lifting session that felt amazing. We showered after and then ventured outside for a few hours.

Our first stop was to get tickets for the Duomo … which took us no time at all because the cathedral was barely open at that point. Hooray for keeping weird American hours! We walked around inside and went up on the terrace. 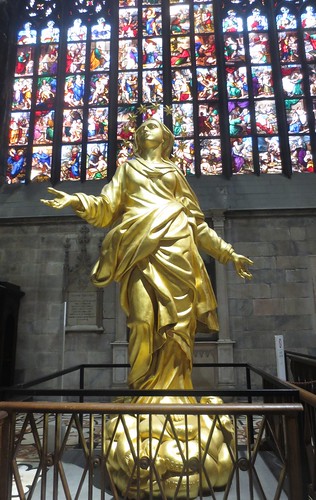 Replica of the Madonnina that’s on top of the cathedral. 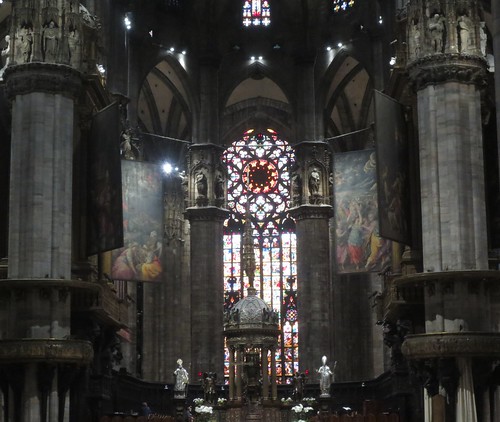 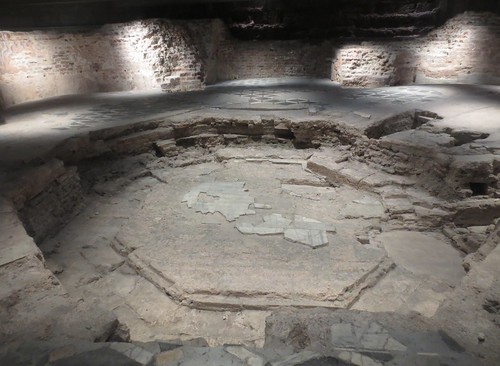 Archaeological site underneath. A lot of the cathedrals seem to have been built on the same sites as former churches, so there’s history beneath them. 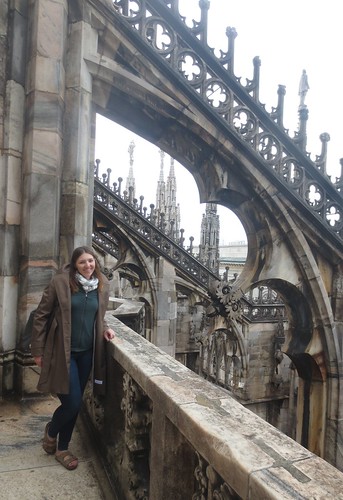 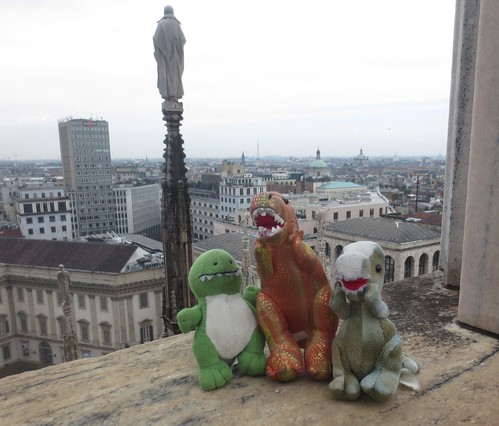 Dinosaurs with the city behind them. 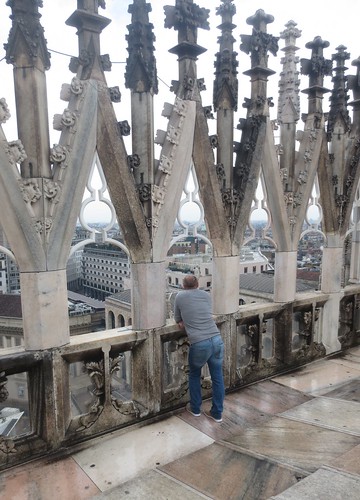 B taking in the view. 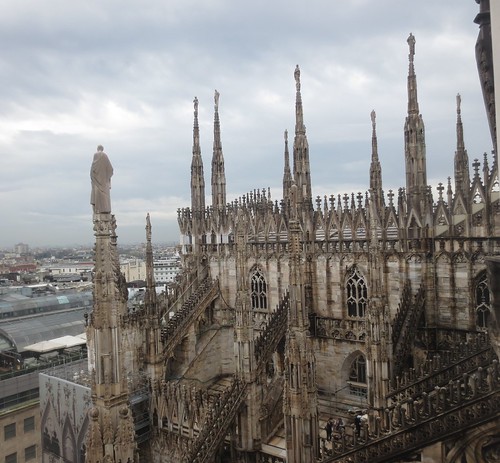 We left the Duomo and headed essentially next door to the Galleria Vittorio Emanuele II, an insanely awesome shopping center. We grabbed some waters as well as a snack and cappuccino inside. 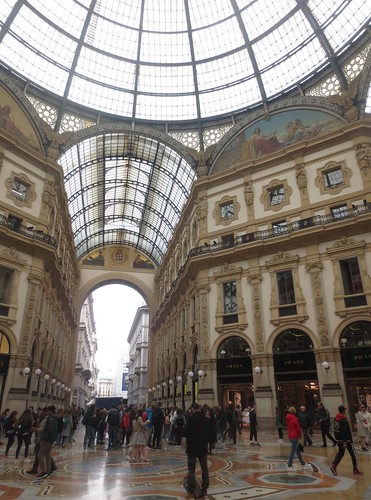 Our next stop was the Milan canals, which I had read about. Got turned around a bit on the way, but eventually made it there. Definitely not as impressive as the Venetian ones, but fairly off the tourist beaten path which was nice. 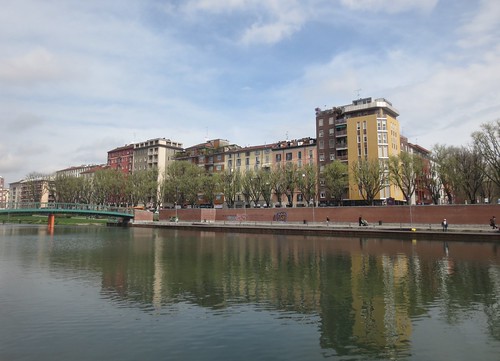 We split a massive (and delicious) slice of pizza for lunch. It reminded me of my favorite place back in Boston (T. Anthony’s, if you don’t remember), but not *quite* as good. The still-shining sun provided us a pleasant and much more direct walk back to the hotel. 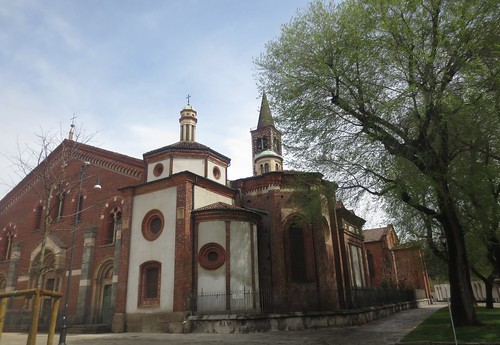 Random church we saw on the way. 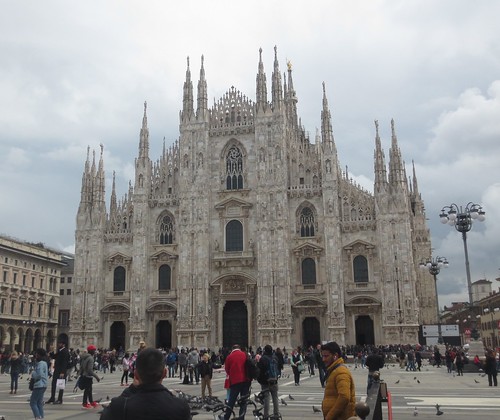 Duomo with clouds rolling back in.

We realized we still needed to visit the Duomo museum (admission as part of our cathedral entrance), so we did that. 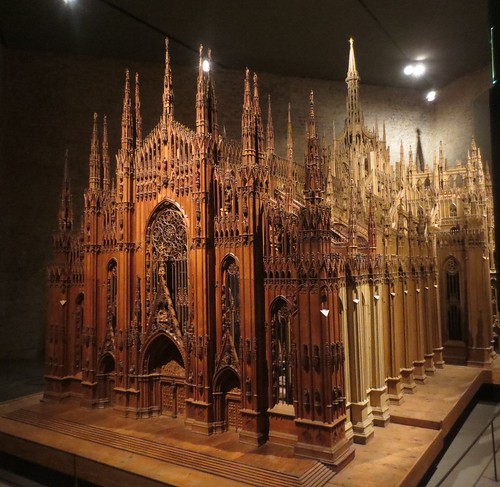 After, we decided to go back to the hotel to chill for a while. We’ve found when traveling that it’s wise to give ourselves some downtime. B ended up napping while I killed the rest of my nook battery to FINALLY read T. Kingfisher’s “The Wonder Engine,” which I had been saving specifically for this trip. It was amazing as I expected it to be.

We wandered out to find food that evening and it ended up being fairly snacky and fairly terrible. It also started raining again, but it meant for some fun night shots of the Duomo. 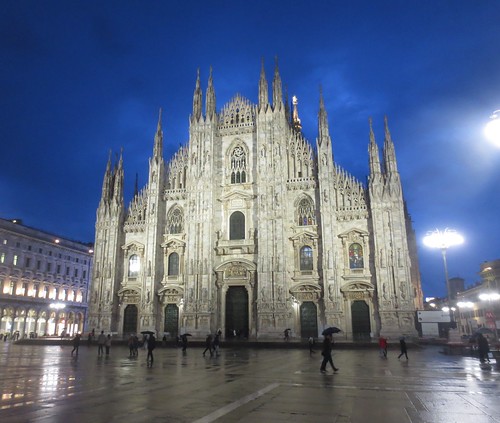 We then found ourselves the first gelato of the trip from a cart (the shop we had been eyeing had just closed as we walked in), but it was delicious. 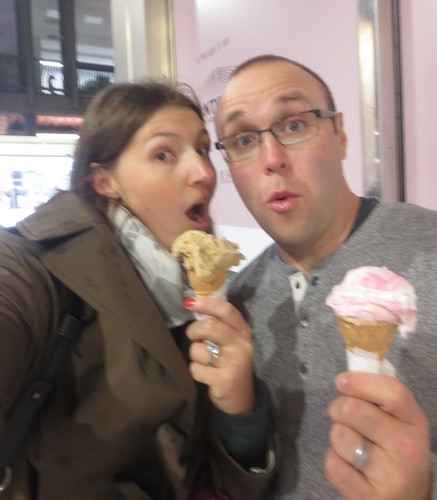 We packed up and headed to bed – we were out of town the next day.