Well, back on an airplane – this time back to the USA. Last I wrote, I was still in London and getting ready to start our last day. Well, last full day at least.

When I stopped journaling, we left the hotel and started walking our normal route – down Piccadilly toward Piccadilly Circus. We turned right at Regent St. and headed down toward the Thames. We made a turn at St. James Park … but went the wrong way. It wasn’t a big detour, but a little one, and we got to see the backside of Westminster Abbey (although, it may really have been the front), which was cool.

From there, we headed past Parliament 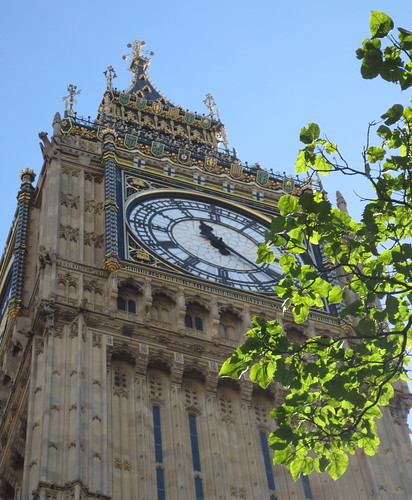 and across the Thames, with the Imperial War Museum being our destination/goal. Dad suggested it and it was free, so we figured, why not. It was only for the “modern wars” (WWI to more recent), but still pretty cool. The exhibits I really remember were a wartime (WWII) house (LOVE propaganda posters), 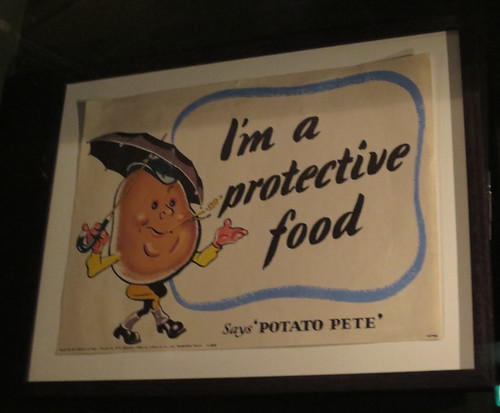 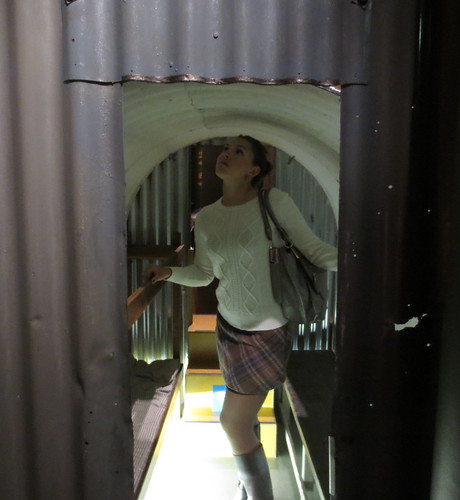 the secret war (that is, espionage) and one on the Holocaust.

The secret war one was pretty cool. I really liked the exhibition in that it raised questions at the end regarding espionage and spies and intelligence and whether it’s still needed. It provided a whole bunch of quotes for both the pros and the cons, but it left it open for discussion rather than making a judgement, which I appreciated. Plus it got Brandon and I discussing it, so mission accomplished there, I guess. British museums respect the fact that their visitors are intelligent people who can read and think. I feel U.S. museums dumb stuff down a bit too much.

The second exhibit I really enjoyed was the one on the Holocaust. It wasn’t as viscerally powerful as the museum in D.C. (no smell of shoes, for example), but extremely well done and I thought almost better than the Holocaust museum. Plus it was free! It had a lot of little anecdotes about people – mostly the Jews – and shared a glimpse into their lives. Sometimes that person lived; sometimes they didn’t. I was also struck, when reading their thing on Hitler’s rise to power, how my dad was right in that it was very similar to Obama’s. Felt kinda awful thinking it, but y’know.

(side note – it was really nice mostly avoiding election talk over here. couldn’t avoid it completely, but it was nice to have TV on and not see 5214630937 political ads)

From the Imperial War Museum, we headed back toward the Thames. We grabbed a tiny snack from a cafe (I grabbed a Magnum bar; forget what mrrmrr had – possibly just a Fanta) and kept heading along the Thames. We passed a lot of stuff I’d never seen before – the Tate Modern, Shakespeare’s Globe Theatre, 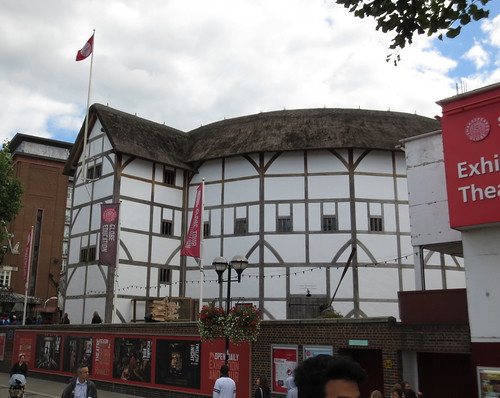 a book market, etc. We passed by an Eat, where we stopped for ham and Jarlsberg baguettes (and a packet of crisps for me).

We came upon the Clink Prison Museum 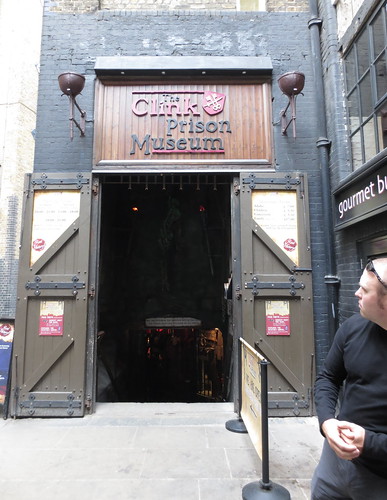 which we hadn’t heard of and almost checked out, but it seemed just the slightest bit too cheesy to do that day. So unfortunately, we passed. We did stop at the Starbucks just down the street, though, for some more souvenir coffee cups. I also saw they actually had signature hot chocolate, which I haven’t had in years. Obviously I had to get some. I had forgotten how good it was … and how rich. It was nice having it, though – I had drunk SHC on our engagement trip to Monterey back in November 2009 – to have it again on our honeymoon/1st anniversary trip felt like a nice full circle type of thing.

After Starbucks – where we learned it was International Talk Like a Pirate Day, we saw a pirate ship 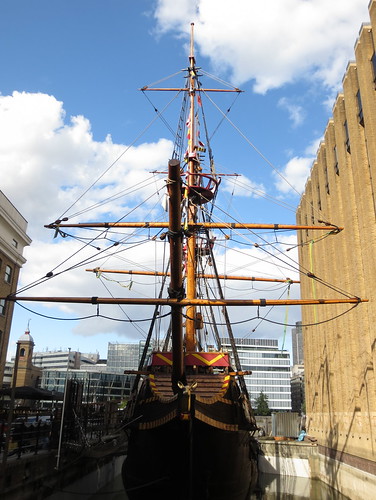 just down the street … and got our first London cache (finally). Then back along the Thames toward Tower Bridge, past the London Dungeon. We got some pictures of Tower Bridge – lucky enough, we got to see it in action for a cruise ship – 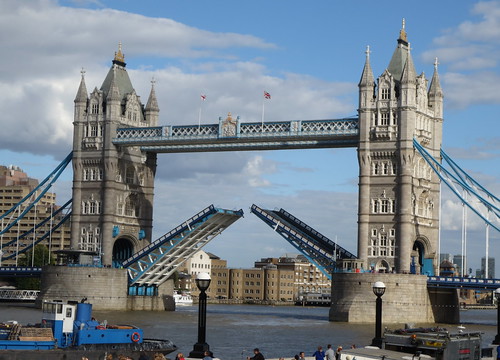 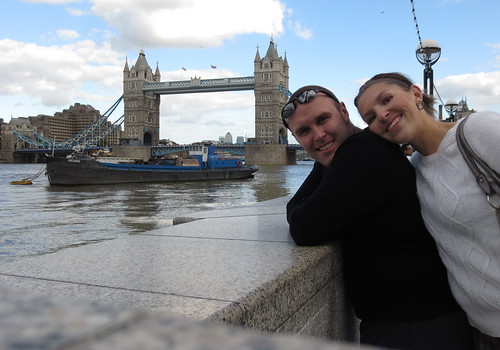 as well as the Tower of London, just across the way. We headed back from whence we came, detouring off the path to find another cache.

We had brought some travel bugs with us and really wanted to drop them off, so we found a cache where we could. It definitely took us off the tourist path, to essentially a graveyard for prostitutes and unknowns. 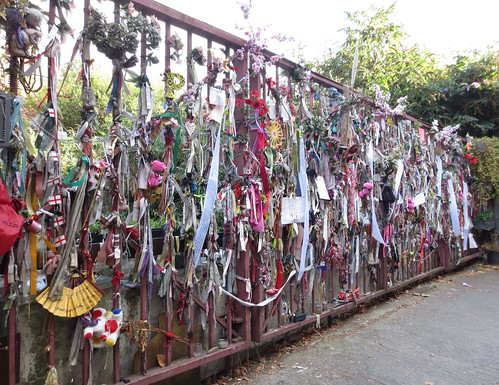 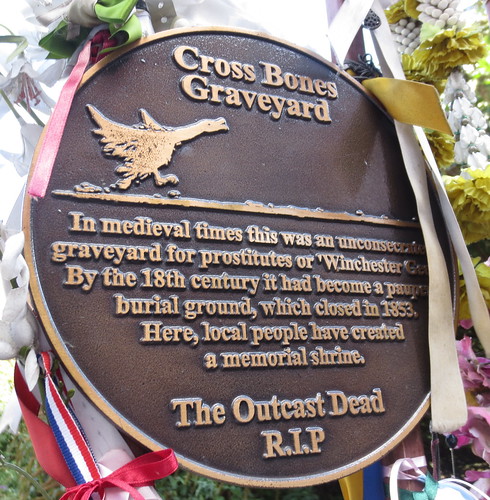 It was really quite cool and something we never would have seen had it not been for geocaching.

From there, the search for possibly another cache took us to the other side of the river, but we soon realized the difficulty and terrain – if the tide was in (which it was), it was totally inaccessible. Dangit. So back to the hotel it was, 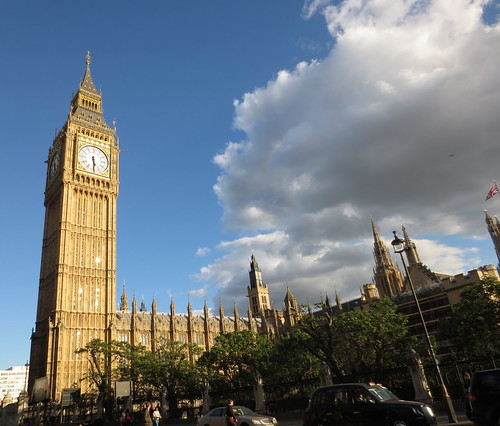 since we were both about dead by that point. We got back and flopped, eventually deciding we needed dinner. We gave up and decided to treat ourselves to room service – honeymoon and all – but room service was being retarded and we couldn’t get through over the phone. We really didn’t want to eat at the restaurant, but didn’t have much of an apparent choice by that point. We went downstairs, told the front desk that room service essentially sucks and went to the restaurant … before realizing that we were way too underdressed. We decided to take the staff’s suggestion of ordering food there and having them take the order to room service. Much better. About 30 minutes later, we got our Hilton chicken club (meh), extra chips (mmmm) and sparkling water.

After dinner, some naughty reading, some last good honeymoon sex, and then bed.

The alarm went off early this morning so we could shower, pack and eat breakfast while still catching a tube line out to the airport by no later than 8:30. We were on the Underground by 8:15 which was good. We got to the airport and checked in with plenty of time … which was good, because security at Heathrow was a disaster. Apparently there was a terrorism threat or something, because tons of people and bags were taken aside for additional screening. Both our Travelpros were set aside, but thankfully just re-ran through and fine. But Brandon’s Timbuk got the full treatment, causing us to be stuck near security for at least 20 minutes. However, all was good and we obviously got on the plane. 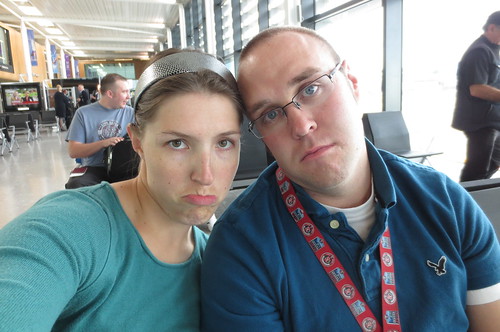 We had our pretzels and our hot lunch (sketchy salad, roll, crackers and laughing cow, either chicken and mushrooms over rice (eh) or some beef with wine sauce, ptotatoes and veggies (ick) and some crumb cake). I already watched Cars, am journaling now … and not sure what’s next …