Hey, I’m only getting to this post a month late.

As we did for New Year’s Eve, we went to D Bar Desserts for one of their special tasting menus. Compared to NYE, I thought the VDay tasting menu was worse. They did have one dish that was far and above anything served on NYE, but overall, I was ever so slightly disappointed.

The first course was oysters – fried. 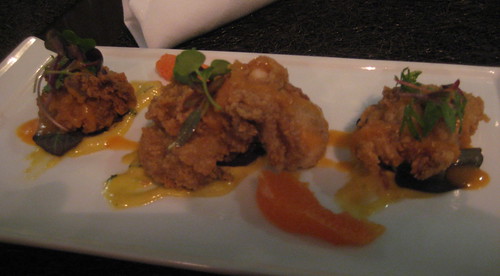 This was the first time I believe either of us had eaten oysters. They were … different, to say the least. Definitely a lot less scary than say, on the halfshell, but still … odd.

The second course … I did not eat. The antijitos (small bites) were unfortunately way too spicy for this girl. 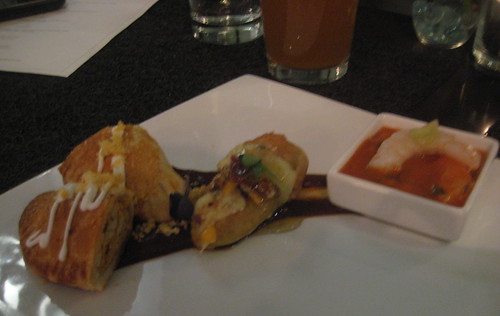 Brandon really enjoyed the chicken hand pie … and the rest? Not so much, unfortunately.

Because the staff at D Bar is incredibly accommodating, I got their dressed avocado instead. 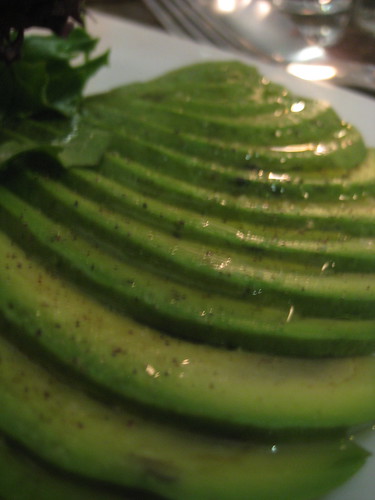 I never thought I could eat a whole avocado just like that … but I did. Brandon also liked having it around as it was a nice counterpart (think: guac) to his Mexican-inspired dish.

Next course was probably the best thing we ate at either of the tastings – the tenderloin. I should mention that we had the choice between escolar (fish) or the tenderloin and we should have been smart and got one of each … but the tenderloin looked too good to pass up. Which it ended up being. 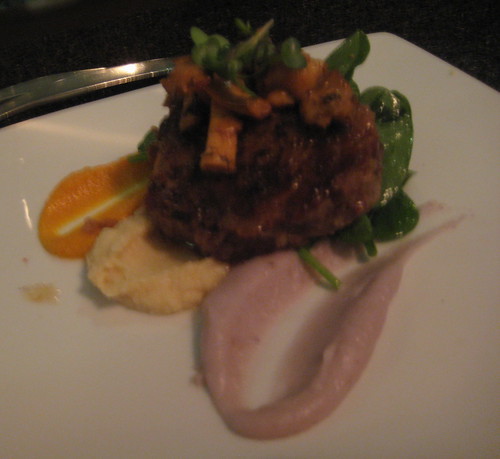 OMG outstanding. Also awesome: that bottom root vegetable puree was from a Peruvian purple potato … something we had just read about in Botany of Desire. Funny how that works out.

Next up were the dessert courses, which didn’t have descriptions.

The first one was a “Tasting of Citrus.” 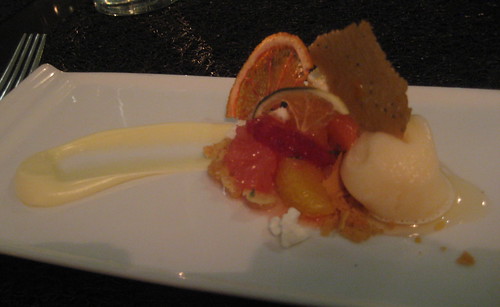 Brandon, being citrus boy, loved this one. For me and my sensitive (or overloaded) taste buds, it was a bit too much tartness for me. I couldn’t finish it, unfortunately. Presentation, though, was an A+. Totally cool looking.

This set of dishes was a mix of chocolate and passion fruit stuff. The first item, the little heart tart, was good, but I was a bit taken aback about how hard the tart was. I guess I was hoping for something a little … easier to eat for lack of a better phrase. The middle souffle was my favorite – my only complaint was that there wasn’t enough of it. The final bite was very similar to one of the chocolate and mango dishes from NYE and it was tasty.

The final sweet course was, once again, petit fours. This time, though, I got a picture.

The chocolate-covered strawberries were awesome. The rest of it … well, we love Keegan and the D Bar staff, but they can get a bit too creative for our admittedly simple tastes. The majority of these were testament to that.

Regardless, it, as always, was a great time and worth what we spent for the experience and a chance to expand our food horizons, even if our palates didn’t always agree.

Going on from our first year of dating, every year on New Year’s Eve, my now husband and I have usually gone to Rodizio Grill, a Brazilian steakhouse. While delicious, you get so much food that it really is a once-a-year place. Normally, not a problem, but we chose Rodizio as the location for our rehearsal dinner.

We definitely could have done Rodizio again, but the idea didn’t sound that appealing to either of us.

Enter facebook and the feed from one of our favorite restaurants, D Bar Desserts. It posted that it was doing a multi-course meal with a champagne toast, party favors and an optional wine pairing. While neither of us really are foodies, we have enjoyed almost everything that the D Bar staff (including owner Keegan Gerhard) has thrown at us. So, we took a chance and went and were so glad we did.

Dinner started at 10pm and contained six courses – three savory, three sweet. The three sweet started at midnight along with our champagne toast to ring in 2012.

In short, it was a blast. Due to being, well, essentially regulars there, we were given seats at the bar for the dinner so we got to see Keegan and his staff create our desserts throughout the whole night. 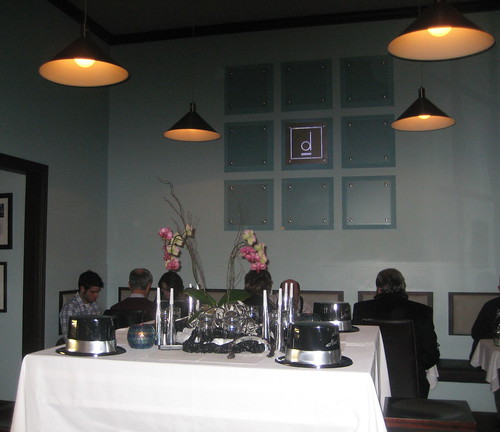 Before it got busy. 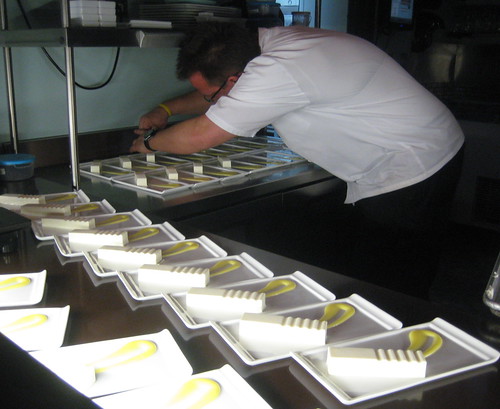 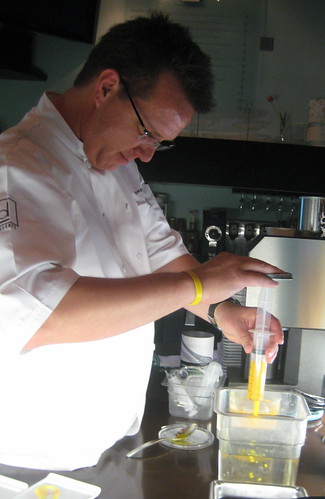 As I mentioned earlier, we started off with three savory courses.

The first was a petit savory souffle, described as such: “fallen blue cheese pecan souffle * braised kurobata pork belly * bacon caramel.” While I’m not the biggest fan of either blue cheese or pecans, the souffle was delicious. It was light and the husband was “very pleasantly surprised” with it. The kurobata pork belly (kurobata is the pig equivalent of either kobe or wagyu beef) was heavenly and I seriously could have eaten a whole plate of it. The bacon caramel was I believe the drizzle on the plate; either way, this course may have been the best of the six. 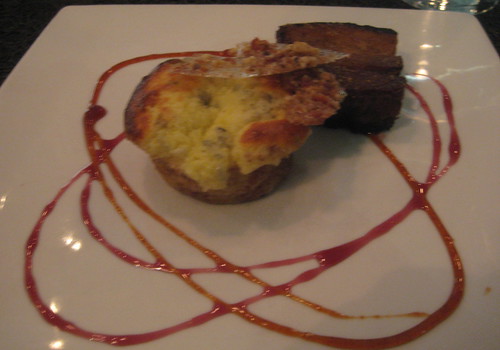 The second course was diver scallops two ways. Since there were two of us at dinner we each received one of the ways. One way included “b’nut squash risotto * brown butter beech mushrooms * burnt orange caramel beurre blanc.” 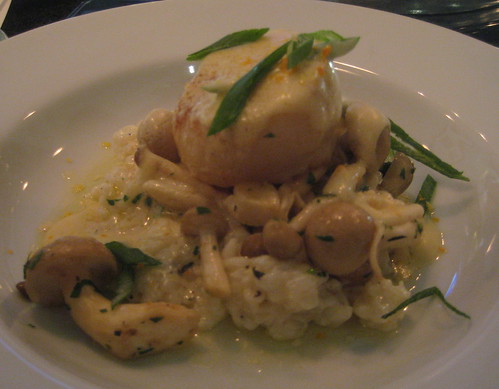 These were mine. You could definitely taste the beurre blanc – well, taste a lot of butter, actually, but this course was a foodgasm, plain and simple. There wasn’t a single thing I didn’t like about this dish. 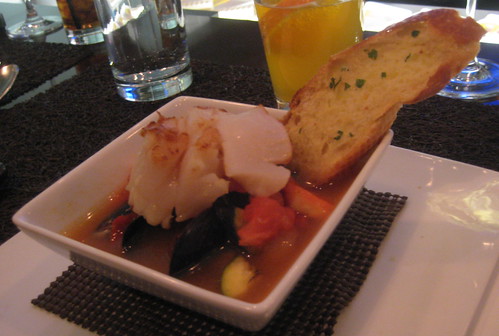 This was Brandon’s (the husband’s). We both enjoyed it, but he honestly said it wouldn’t be something he’d order again. (I’d order mine in a heartbeat.) 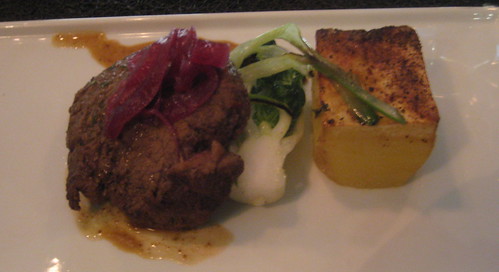 I don’t really recall what all five spices were – some were essentially pumpkin pie spices (cinnamon, nutmeg, cloves) and I believe fennel – but they overpowered what was otherwise a really well-cooked delicious piece of beef. I think I have more taste buds than the average person and sometimes, it works as a disadvantage. This course (as well as the next) are examples of that. The potato was disappointing as well. It felt a little undercooked and dry (easy to happen with a potato). I felt that this dish had huge potential (glancing at the savory menu, it looked to be the only thing I normally would have ordered) and fell short.

As we had our champagne toast at midnight, we had our first sweet course, titled Citrus & Pink Stuff. 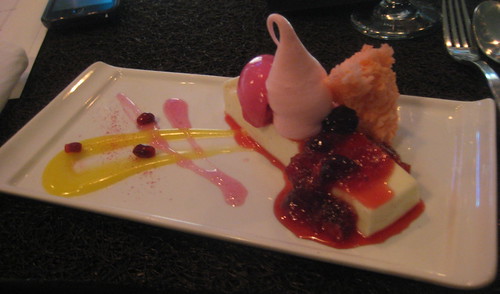 While pretty, it seemed unfinished. We watched Keegan making these all night and at one point they seemed finished (though simple). Then, we saw what they were supposed to look like: 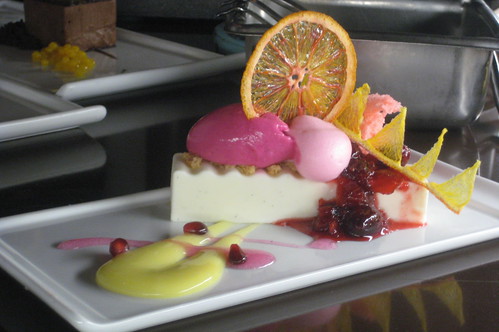 With the addition of the orange slice(s), it suddenly became perfect once again.

Described as “yogurt panna cotta * winter compote * micro sponge * prickly pear sorbet,” it was an assault of a ton of different flavors that was almost too much for my poor tongue. Our waitress described the micro sponge (that pink fluffy thing in the back) as “tasting like Barbie,” which was actually pretty accurate. That flourescent pink blob on the dessert was the prickly pear sorbet which, if possible, tasted as bright and outrageous as it looked (almost overly sweet). I enjoyed the simple combination of the pink whipped cream, the panna cotta and the winter compote together and would have been happy with just those three items.

Well, that, and seeing the glitter (or non-toxic glitter-like substance) in the pink drizzle on the plate. (I love sparkly.) 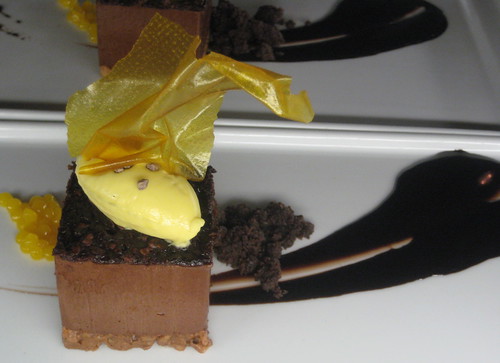 This was my favorite sweet course. Weirdly enough, I loved the chocolate crumbly bits the best. Brandon, when asked to revisit his thoughts, said “delicious. Great way to finish off the night.” And I agreed.

If you’re still following along at home, you may recall I said six total courses (three savory; three sweet) and yet I’ve only shared five. That’s because the six and final course was taken to go – Petit Fours: “bon-bon * guimauve framboise * pate de fruit.” We haven’t gotten a chance to eat them yet and I neglected to take a picture of them plated, but I’m sure they’re good.

Overall, the NYE experience at D Bar was well worth the money spent. While we didn’t adore every dish we had, it was great eating outside the box (for lack of a better mangled phrase), trying dishes and eating things we normally wouldn’t have eaten (or chosen to eat). The atmosphere was also wonderful – we made conversation with those around us and hell, the entire restaurant (staff included) did the wave several times. Where else would you see that?

Money, time and lack of sleep (work at 5:45am the next day) well worth it. 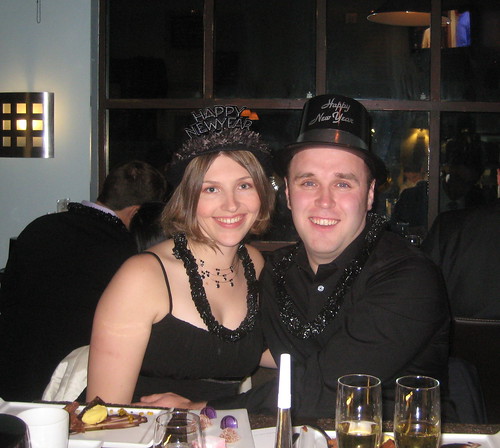