(As I mentioned previously, this is in a series of posts about my September honeymoon/first anniversary trip to Paris and London, taken from the journal I kept on the trip.)

France! We just wrapped up our first day here … though it was really more of a half-day, really. But let’s pick up where I left off …

Last time I wrote I was still on the flight to London. I didn’t end up watching anything else. I went through my 680 pg. InStyle (nice stuff in there, but $75 is not affordable, sorry. Not for all of us at least). So I went through that, listened to my iPod and then just read my nook.

Near the end of the flight, we got a small breakfast of a bread (chose a croissant), yogurt, fruit and meat and cheese. It was pretty good, actually.

We landed about 7 am, took no time to clear customs, got our bag to recheck it … and then had five hours to wait. We had two to wait before we could even check our bag again. So, we sat in an airport cafe wasting time (Brandon had an americano; me, a blueberry muffin). It was finally time to check in the bag – great! Let’s go through security! And now let’s sit … for another three hours. We seriously started running out of gas at this point.

After what seemed like FOREVER, we finally got on our flight to Paris. The flight was very uneventful because we slept through absolutely all of it.

After the flight, we collected our bag, got a few euros out of an ATM, paid a ridiculous amount of money for metro passes and got on a train from Orly into the city. While waiting for the train, I started to feel like passing out …probably because I hadn’t eaten anything in damn near 12 hours at that point (well, anything substantial). Therefore, I snarfed one of the emergency granola bars I had.

Once into the city, I got us off on the correct metro stop and almost got us to our hotel – I was just on the wrong side of the Champs-Elysees. We checked in to the Hotel Mayflower (ironically the same hotel we stayed in during the great Spisak family vacation of 1998), freshened up, changed and went right back out.

Dinner was at Leon de Bruxelles, a mussel joint I ate at with Genevieve last time I was in Paris back in 2001. Brandon had steak-frites (which were tasty) and I had moules (and frites), which were also good.

After dinner, we strolled down the Champs-Elysees for a while, rolling our eyes at a snazzy Abercrombie and Fitch 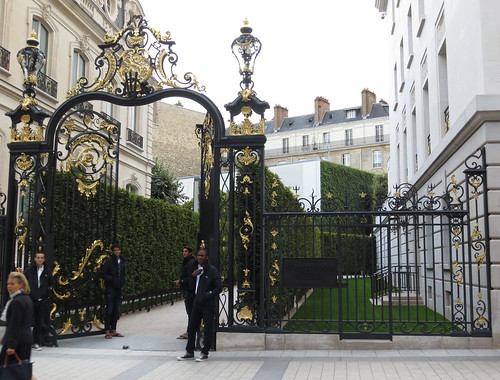 before hopping the metro again near the Tuileries. We took it up to essentially near Montmartre or Paris’s true red light district – the Moulin Rouge … like, eleventy-billion sex shops were right off the metro stop. 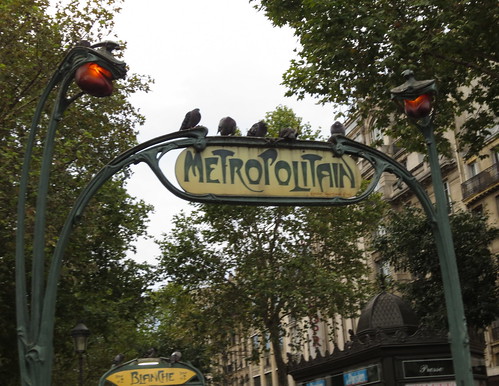 It was kind of cool, but not sure if it was ultimately worth the price of admission.

Afterwards, we wandered into one of the sex shops … and saw actual bestiality DVDs. Which I’m pretty sure are illegal stateside, as I’ve never seen them. Which I’m fine with. 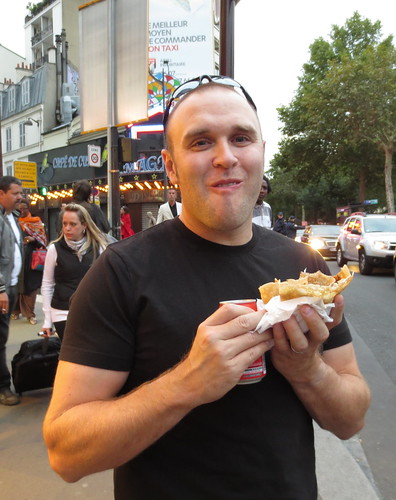 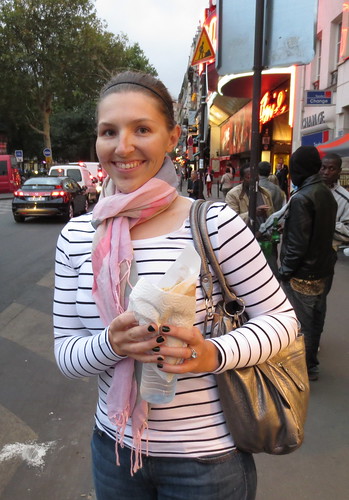 we walked to the next metro stop, hopped on, got off near l’Arc de Triomphe, took some pictures, 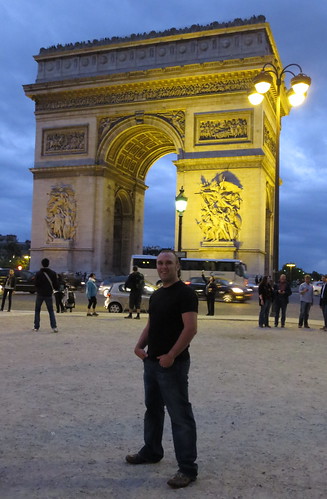 and went back to the hotel, where you find me now.