B and I recently came back from a 10 day trip to Italy, and it was amazing. I hadn’t been in 20 years and B had never been … and we’d been discussing this trip for years so we FINALLY bit the bullet and did it. As I currently have it outlined, I should be able to get the trip done in five posts – four for the trip and one for the food. This is the fourth of those posts.

We made our last full day in Florence a fairly busy one. We slept in a tiny bit (comparatively speaking), but woke up with plenty of time to grab breakfast and stand in line for about an hour waiting to get into the actual Duomo cathedral. A line was going to be stood in regardless (I read on some other blog somewhere that standing in line is one of the great Italian traditions (for tourists?)), and we figured an hour before opening wouldn’t be too bad. We were right. 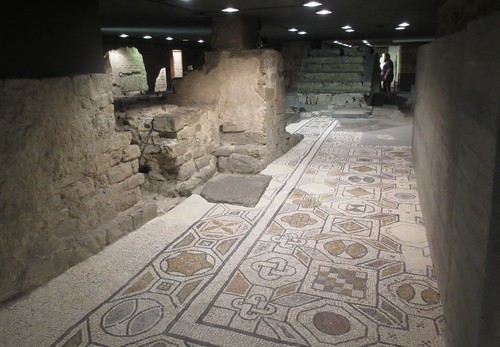 Santa Reparata crypt underneath. Once again, built on top of another church. 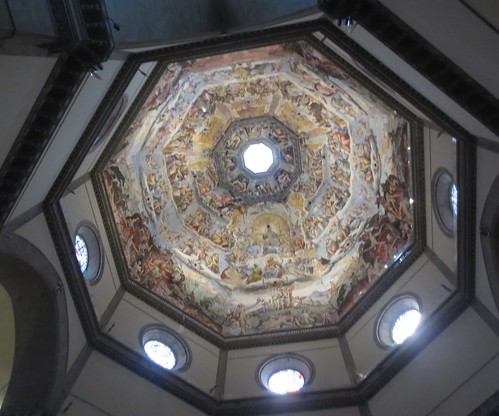 Looking up in the Cupola.

That taken care of, we headed across the Arno to officially hit the Palazzo Pitti as well as the Boboli Gardens. 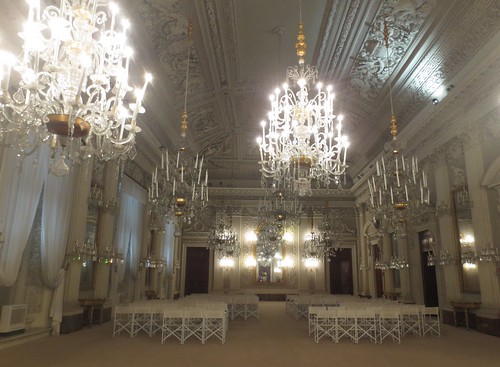 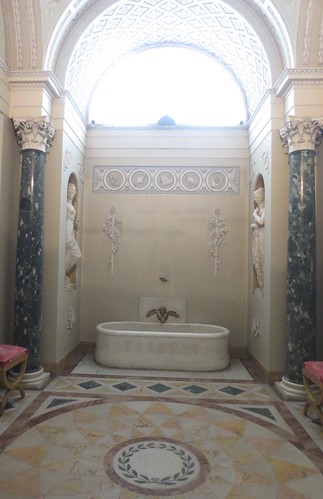 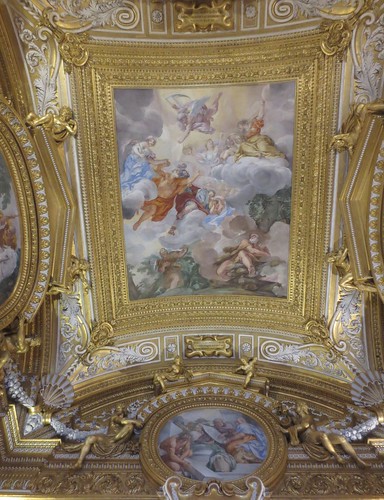 The Palazzo, in its essentials, was basically an ostentatious old house. From an aesthetic standpoint, I think I prefer Versailles from my vague memories of it … although that might not quite be the fairest comparison.

When it came down to it … we might have been just happiest buying tickets solely for the Gardens as opposed to the package deal we did purchase. 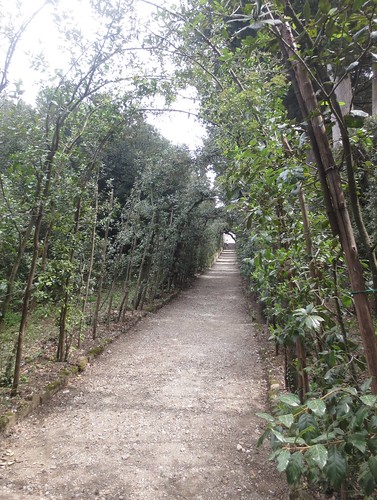 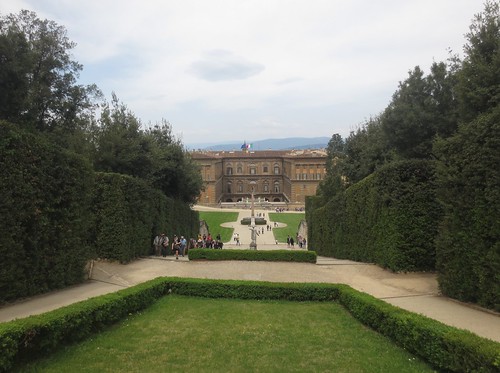 Looking down at the Palazzo Pitti. 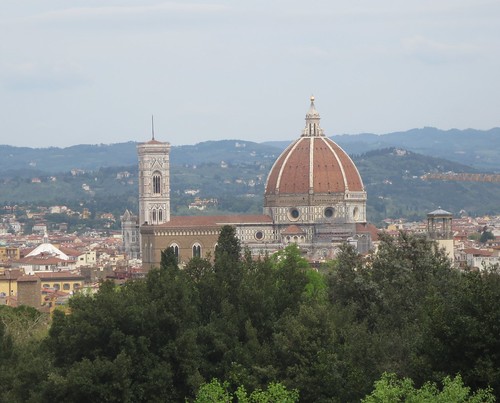 Killer view of the Duomo from the Gardens.

I would have adored to spend a lot more time in the Gardens, exploring every pathway … but poor B was getting a bit hangry (and I’m not sure if they allowed re-entry), so we left and grabbed lunch at a cafe down the street.

Lunch eaten, it was back to the hotel to catch up on internet stuff and attempt to pack up. Due to buying the wine and other liquids, we knew we’d have to check a bag, and we figured mine would be the best as it was somewhat hard-sided. When it comes down to it, I am a packing wizard, so I was able to successfully cram everything in (pilot B was fairly astounded at my skills). However, we still thought another bag might be nice … so I decided to be a total tourist and purchase a 30 euro leather tote from a street vendor so I could have a second carry-on and maybe not completely stuff my suitcase to its gills.

B also wanted some chocolate as a souvenir, so we found a local Italian chocolate shop for that. We also decided to get some more gelato … but it was fairly meh. We capped off the night with our third dinner visit for pizza, which we once again ate on our balcony. Which I regret in no way whatsoever. 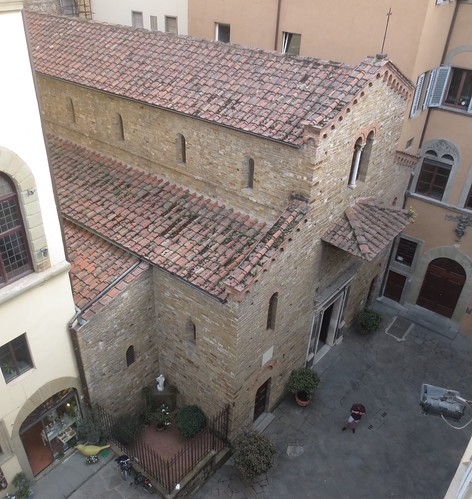 Since I didn’t photograph it earlier, I wanted a picture of the church we had mass in on Sunday … which I took off our balcony.

We woke up early to get one more run in as well as some photos with everything quiet. 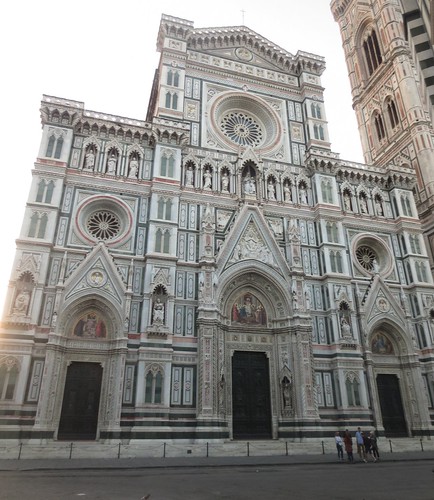 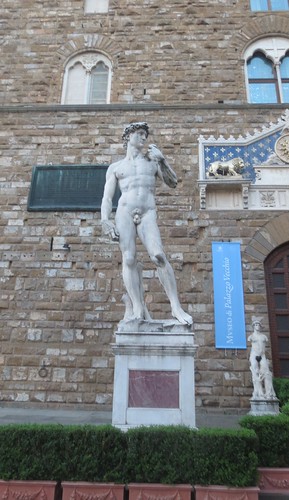 Fake David near the Palazzo Vecchio.

We went back to the hotel and showered and went down to breakfast … where I was surprised with a cappuccino with my name on it. 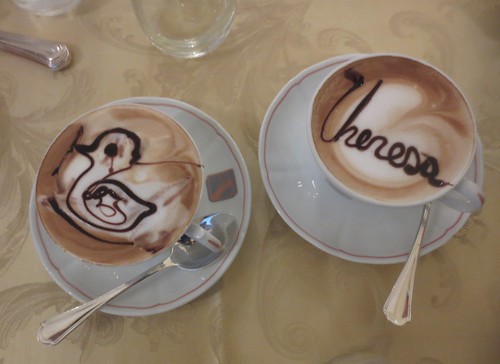 B got a duck. They said his name was too long … which is kind of a lie as he has seven letters, same as I. However, the B probably takes up more space than a T …

I felt so special.

Breakfast consumed, we walked back toward the Duomo for our cupola visit. 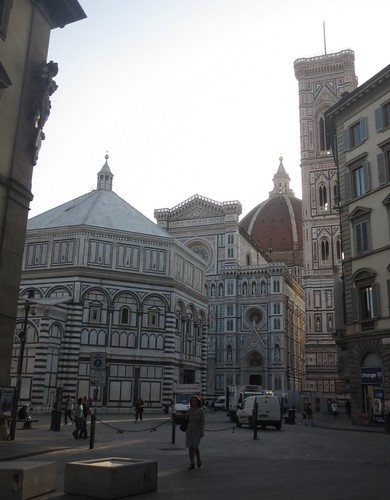 Shot of the baptistery, campanile, cathedral and cupola.

It was a bit tricky to climb all the way up to the lantern part of the cupola, but the views made it worthwhile. It was a wonderful way to cap off our final morning in Florence. 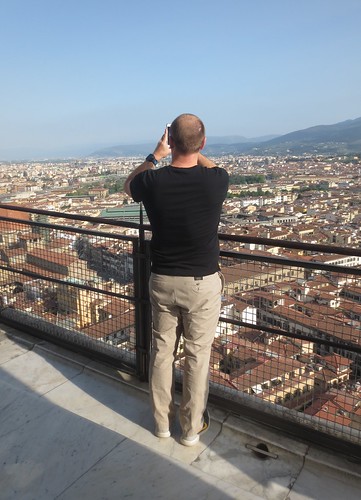 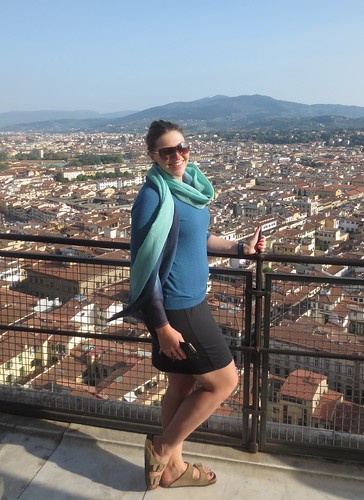 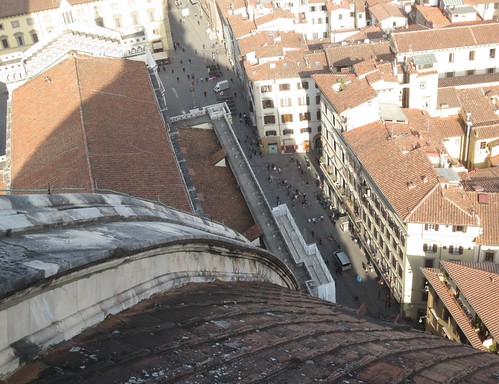 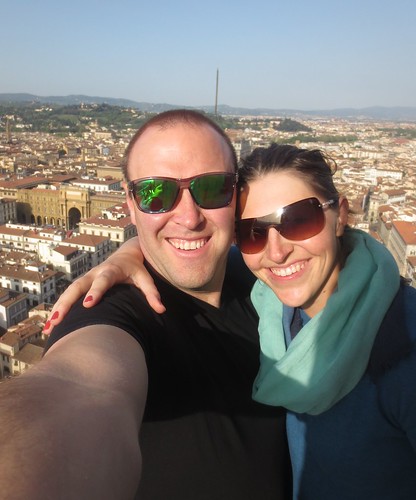 We headed back to the hotel to check in for our flight, gather up our stuff, and check out. We walked back to the train station to buy tickets back to Milan and then over to the airport … as well as some snacks and lunch for the train.

Both trains were uneventful. 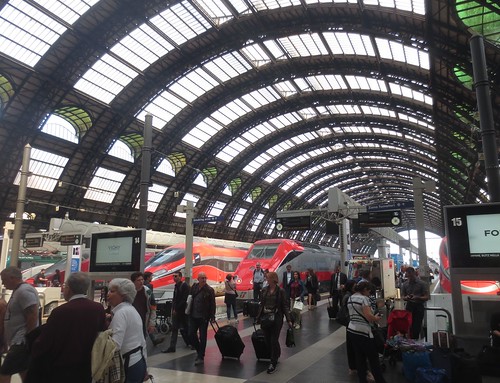 Milano Centrale. I regretted not getting a photo here the first time around.

We had a tiny adventure getting to our hotel – the Holiday Inn Express Milan-Malpensa – but we made it work fine in the end. We walked over to a different hotel for dinner, but in general, it was a very low-key night as we had to be up super early the next morning.

We took the earliest shuttle from our hotel over to the airport just to ensure we could be at the airport at least three hours ahead of time. Our options were get there 3:30 or 2:45 ahead of our flight; we went with the former … and good thing, too.

I checked in my bag okay and got the security check for my passport (or so I thought … there were issues with this) and B probably should have stayed with me, but due to some miscommunication (silly language barriers) … got in a different line. I got through my stuff way quicker, met him in line … where they ended up making him check his bag, too. That dealt with, we had to walk a bit to get through security … and then walk even more to get through passport control. This took up almost two of the three hours, so it is damn good we got there early.

Starving (breakfast at the hotel had been open five minutes before we had to catch our shuttle), we got our final Italian cappuccinos and some mediocre food at the cafe by our gate. We also used up most of our last euros buying some snacks and liquid for the flight home.

No upgrade coming back, but we sat together, so all was well. I ended up watching three movies on the flight (since, well, no nook to read):
– “Murder on the Orient Express” – B started it and I was watching over his shoulder so I finally just turned it on. Good, and I’m going to need to read the book now.
– “Battle of the Sexes” – no clue how much liberty was taken with this (knowing Hollywood, probably a lot), but I enjoyed it.
– “Spotlight” – SO GOOD. I vaguely remember the Boston church/sex scandal breaking while I was in college (… terrible journalism major, that’s me), but the lawyer on the case was a BU grad and featured in our alumni magazine, so I figured I should watch it, and I am so glad I did.

We landed in JFK, cleared customs … and then spent quite a bit of time in the Delta Sky Club before catching our flight home to Denver (which I mostly slept through).

Such an amazing trip, and I am so thankful we took it!