Well here we are, our last full day in London. But before I start it, let’s recap yesterday …

Yesterday we ate breakfast and then head out into the city. We walked along the park and up toward Marble Arch and Oxford St. On the way, we passed Grosvenor St./Sq. and little parts of me giggled – the Pride and Prejudice fangirl parts of me, anyway.

At Marble Arch, we turned right and down Oxford St. We stoped in a few stores:
– Primark, a discount-like department store. I saw some cute stuff that was relatively affordable, but I wondered about practicality and the line to try stuff on was ridonk.
– Harvey Nichols, which had the Yo! Sushi on top of it … pretty sure it used to be a Marks and Spencer back in the day …
– Selfridges, to look at the food hall
– H&M (found nada)
– Topshop – again, a disappointment
– Hamley’s, a giant toy store where we bought some Olympic-themed taxi cabs.
Hamley’s was on Regent Street, which we continued walking down. We found Carnaby Street, center of the swinging ’60s (not as cool as I thought it might be) and continued down and found ourselves back in Piccadilly Circus. Frothere, we headed back to the hotel, stopping at M&S for their 3.50 pound lunch deal (sandwich, drink and crisps/fruit). Drink was fine as was the fruit, but the sandwich? Yuck. Ew. Nasty. So lunch was fruit and the snacks we had back at the hotel.

After a little bit of resting, we wandered back down to Hyde Park to finally do the Cycle Hire bikes (like Denver’s B-cycle or Boston’s Hubway). We had fun riding through the park 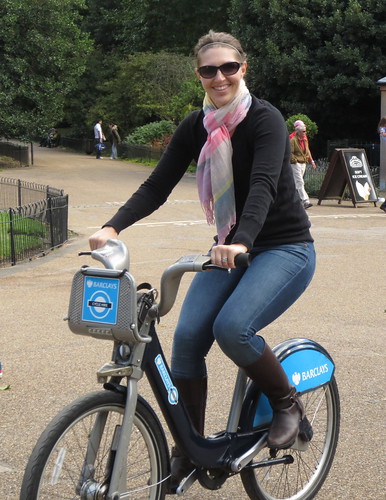 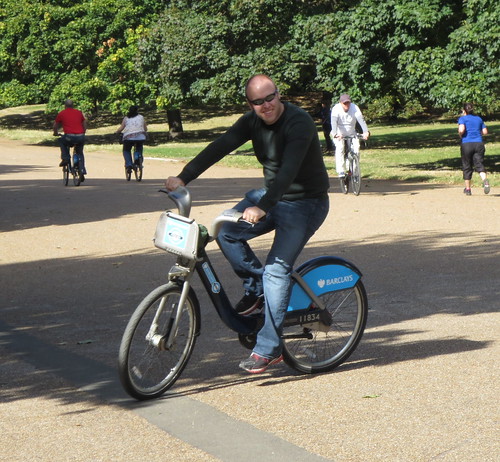 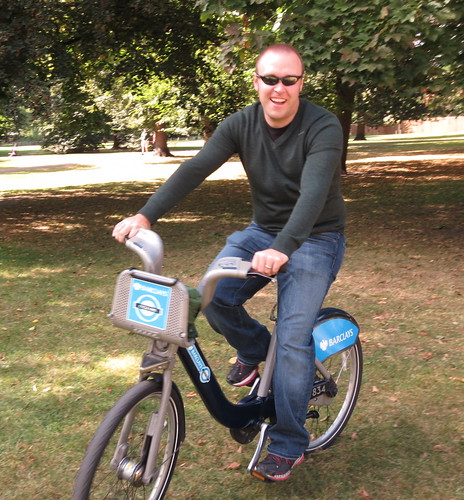 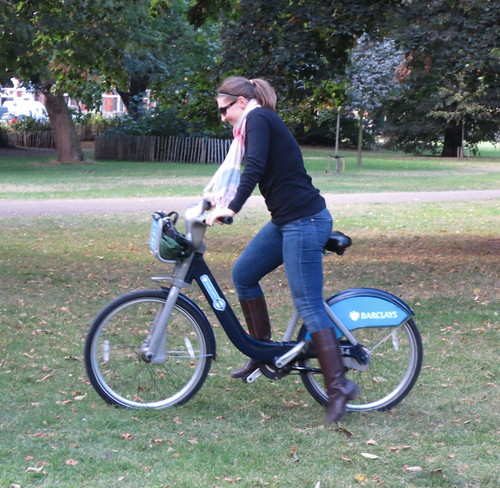 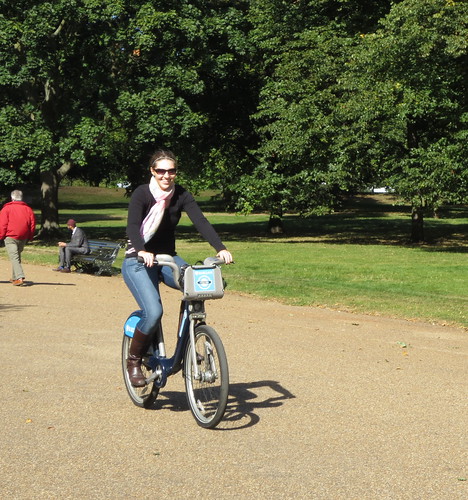 but had issues trying to change out cycles. What started out fun turned kind of disastrous, unfortunately. We got Brandon a new bike and just kept mine (no space to change out) and went back toward the hotel. The CycleHire machine was being screwy with Brandon’s card and we wanted to make sure his card was still okay.

Back at the hotel, we checked it out and everything was happily okay. We chilled for a bit and hashed some stuff out (namely, why I have to be happy for mrrmrr to be happy) before heading back out to dinner.

We walked to Leicester Square and found a pub – very similar to the one we ate at a few days ago – and had dinner. I tried a Staropramen, a beer I’d had in the Czech Republic and enjoyed, but unfortunately, it was a bit too strong for me this time around. My fish and chips 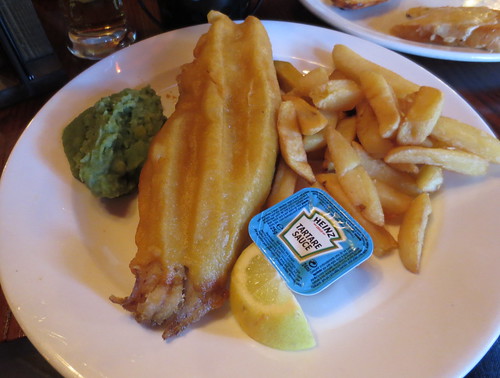 was delicious (mushy peas less so) and Brandon enjoyed his steak and ale pie.

After dinner, we walked up to Covent Garden to try and find dessert. Failing there, we just ended up grabbing some ice cream at the Haagen Dazs in Leicester Square – me lemon sorbet and Brandon cookies and cream. On our way back to the hotel, we stopped in Cool Brittania, a touristy shop to pick up a few things and then in Waterstone’s, a book store. I picked up The Ninety Days of Genevieve for Gen (erotic book with a character named Genevieve? No way I can resist that …) and the Wild and Wanton edition of Pride and Prejudice for me. I’ve started it and … it is interesting. Lydia is made out to be a complete little hooker … which isn’t really a surprise, really and yeah. Some of it isn’t surprising – the sexual tension’s kind of obvious in the original – but it’s also strange all the same.

After some reading of questionable things, it was finally time for some honeymoon sex (yay!) and then bed.

Up this morning, food, shower and a little packing and now it’s time to enjoy again.