B and I recently came back from a 10 day trip to Italy, and it was amazing. I hadn’t been in 20 years and B had never been … and we’d been discussing this trip for years so we FINALLY bit the bullet and did it. As I currently have it outlined, I should be able to get the trip done in five posts – four for the trip and one for the food. This is the third of those posts.

B wanted to see Pisa, so Monday was the day we planned to rent a car and head to Pisa. We left the hotel a bit early after breakfast so we could see the famous pig fountain (Il Porcellino) without masses of people around. 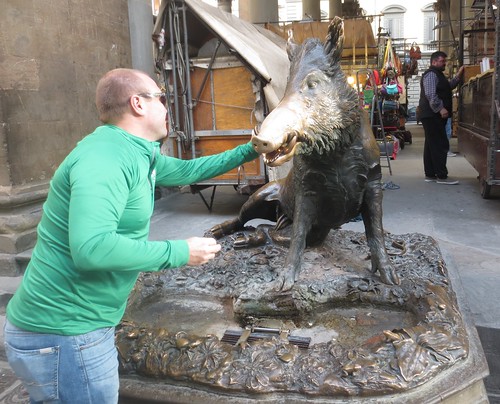 B putting a coin in its mouth and rubbing the nose for good luck. 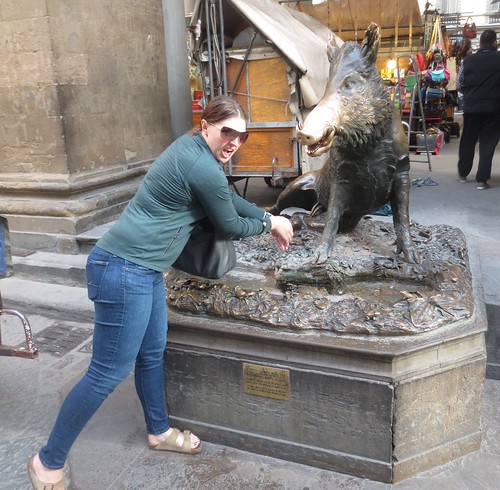 Me pretending to be Inspector Pazzi from “Hannibal,” fake washing non-existent blood off my hands. Because I’m a nerd.

We found the rental car place okay … but realized too late that B needed his passport, so we had to do a round trip to the hotel and back. Oops. Extra walking!

That all sorted, we got our car (an Alfa Romeo with standard transmission, so ain’t no way was I driving), managed to get down the parking ramp and out of town successfully following Google maps. 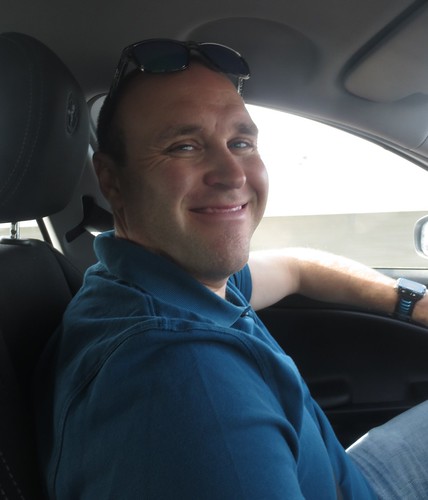 Made it to Pisa okay, found the last spot in some lot … and walked on over. B bought us tickets (you can go up the tower now; you couldn’t when I last saw it 20 years ago) while I spent .80 euro to pee … and it was some of the best .80 euro I’ve ever spent. 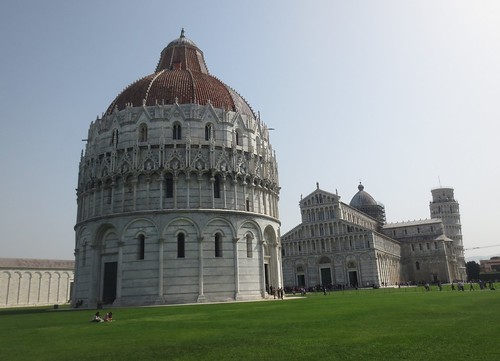 Baptistery, cathedral, and tower (meant to be the campanile or bell tower for the cathedral). 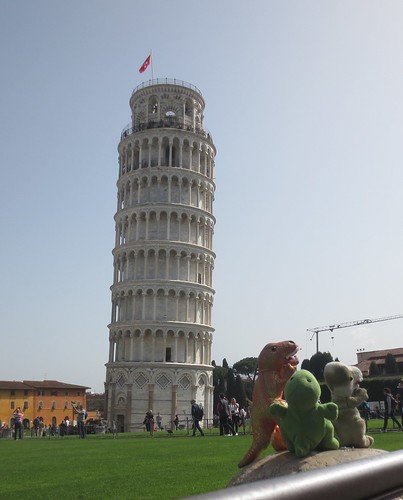 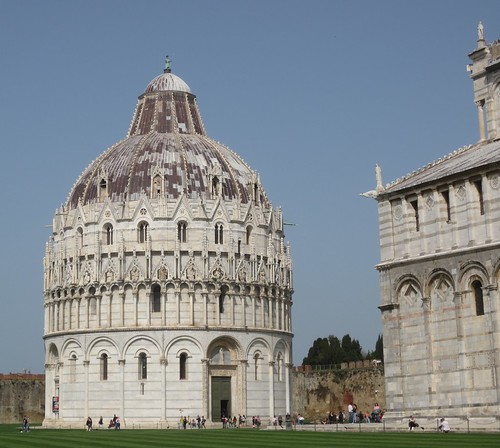 Loved the detailing of the baptistery, though we didn’t go inside. 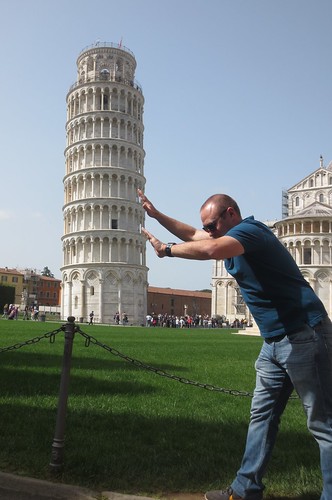 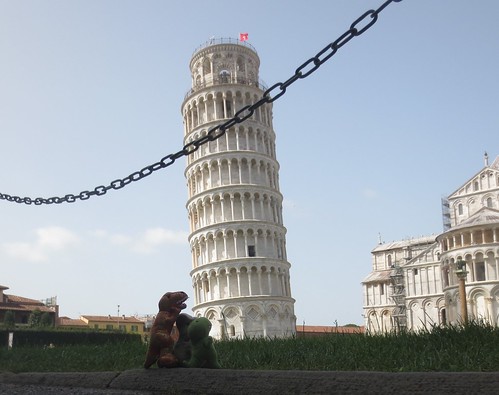 Kidlets trying to do their part.

(much you think I was too mature to do this … I have shots. but on my phone. and I’m not sharing them here. sorry not sorry.) 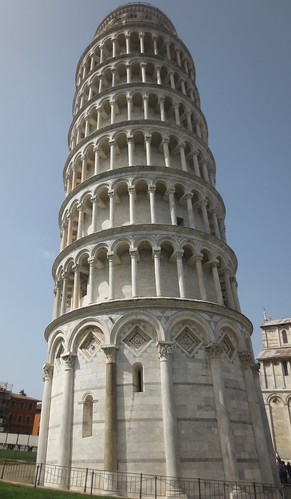 We were in line to get in when I got notified my purse was too big … so I had to run out of line to get it tossed in a locker, freaking out the while since it was right on our entrance time and they had a ton of signs saying YOU MUST NOT MISS YOUR TIME … but thankfully I was still okay. Phew. BUT. If you’re going to go up the tower … and you think your bag might be too big … just check it well before your time. Lockers are free. It’s nice. 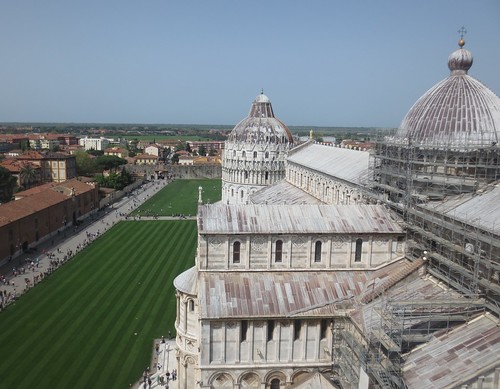 Cathedral view from the top. 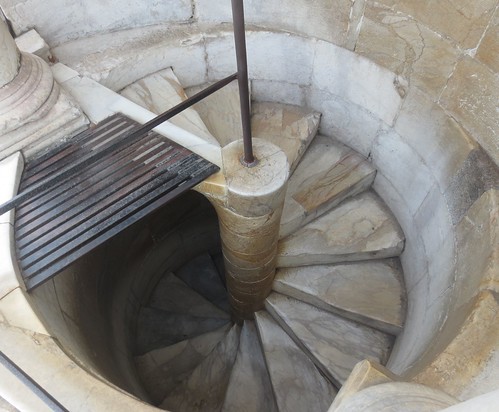 Stairs we popped out of. 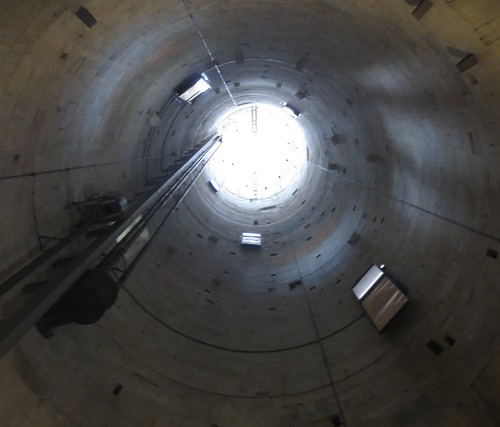 Looking up from the bottom.

We took a lunch break and then popped into the Duomo. I only took one picture inside – the stunning ceiling. 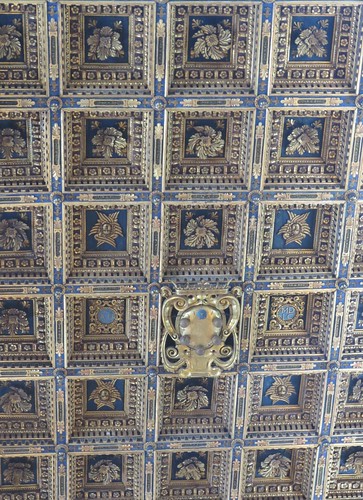 (felt a bit weird taking photos in the cathedral after we had gone to mass the previous day … while most of these churches are sure, open to the public … they’re also still very much in use for services as well.)

We then mostly successfully navigated our way back to Florence (ended up on the toll road for a minute … oops) and returned the rental car.

The hotel was our next stop to quickly check up on some internet stuff and then we popped out for a mid-afternoon pick me up of cappuccino … after which we saw a random parade walk through. 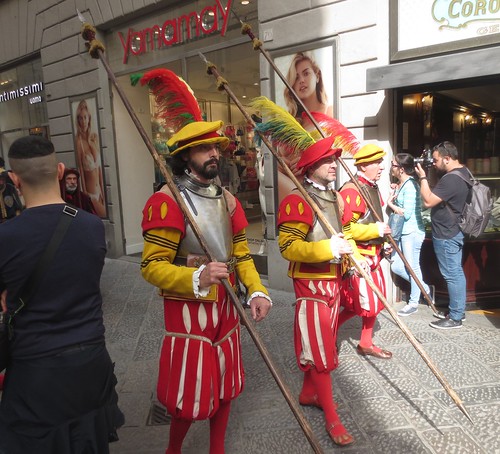 All in medieval (I think? Renaissance, maybe?) dress. I took a video of the majority of it on my phone, and the whole thing passed us by in just about two minutes.

Since we’re run nerds, we returned to the hotel to try to find the Boston Marathon on TV. We weren’t successful (boo), but we Twitter-stalked the race while playing cards, super happy for Des Linden becoming the first American woman to win in 33 years. Yay Des!

We were hoping for dinner to be pizza again … but a lot of things in Florence are closed on Mondays. I figured that we’d have luck finding an open restaurant near the Duomo since it’s the big tourist area and we did.

Our walk back to the hotel included a giant, delicious, yet ridiculously expensive cone of gelato (seriously overpriced).

After breakfast, we wandered over to the Duomo to get tickets for everything. We could … but the earliest available cupola reservation was for Thursday, so we did the earliest we could get, figuring we could do it in the morning before leaving town.

We also skipped the actual cathedral that day (crazy lines), but hit up the baptistery, the campanile, and the Duomo museum. 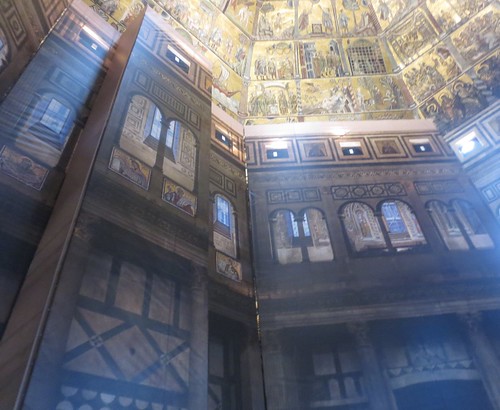 Inside the baptistery. I like how they covered the construction with images of what was behind it. Nicer effect. 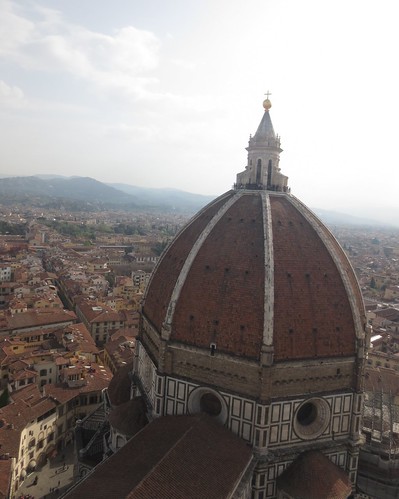 View from the top of the campanile. 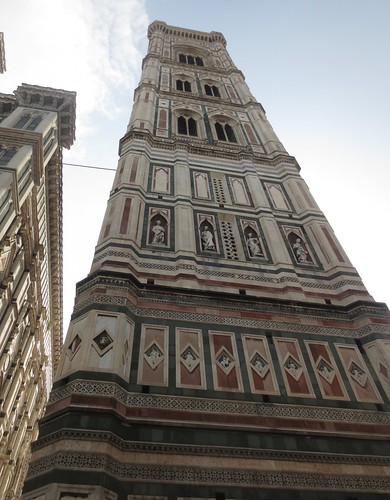 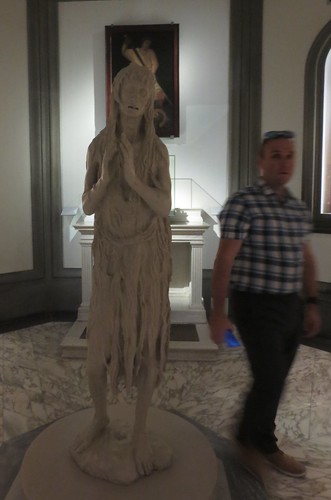 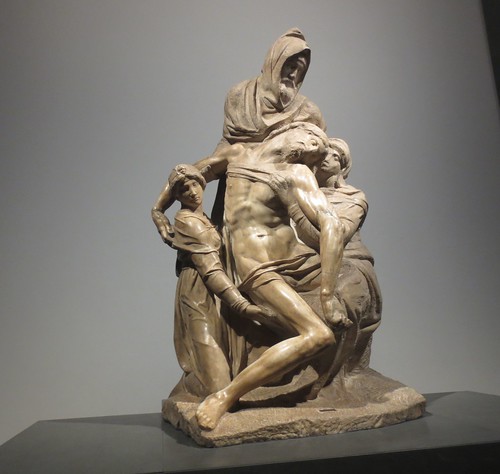 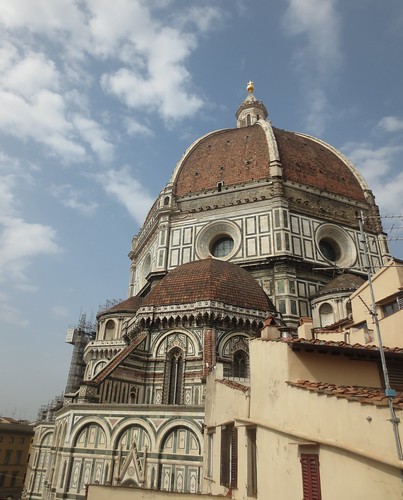 Shot of the cupola from the top of the Duomo museum.

Our next stop was the Mercato Centrale … and we apparently also walked through the San Lorenzo leather markets on our way there and back.

The Mercato Centrale is awesome. Bottom level is kind of like an indoor farmer’s market, with tons of stalls selling all sorts of food and goodies while the top floor is food vendors. We didn’t end up eating lunch there, but we did pick up two bottles of wine, some olive oil, and balsamic vinegar for us (which, as I found out later on my credit card statement, cost us like $10) as well as a jar of jelly for B’s parents. 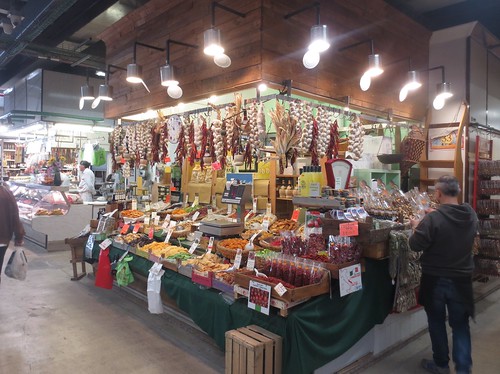 We didn’t want to be carrying all of that around everywhere, so we headed back to the hotel, picking up some sandwiches along the way. 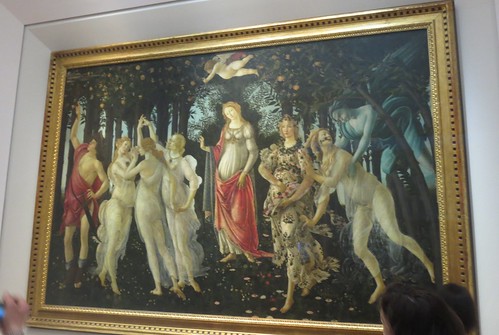 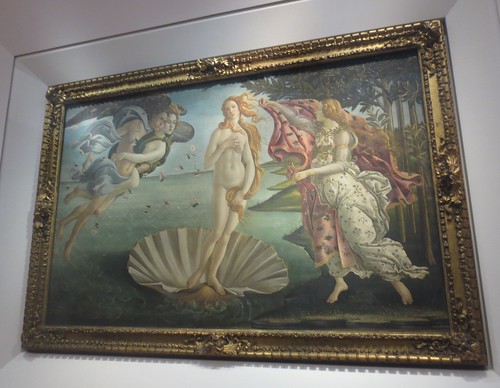 Botticelli’s The Birth of Venus. 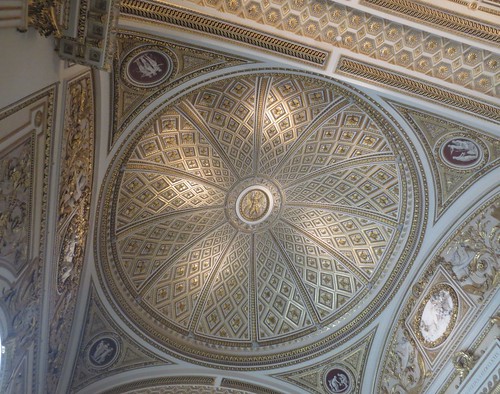 Stunning ceiling in the Niobe room. 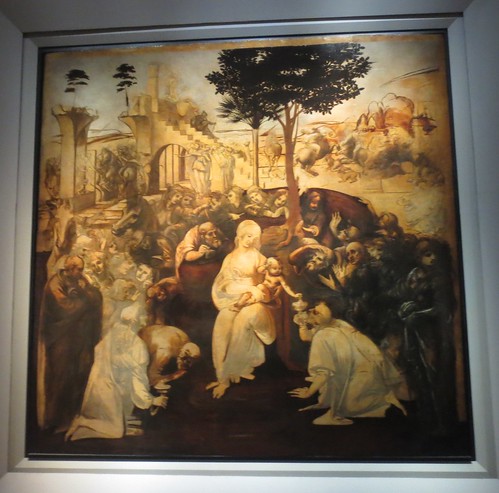 Post-Uffizi, we grabbed a cappuccino near S. Croce church. 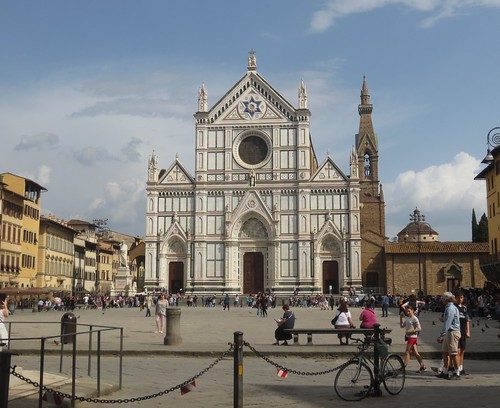 Both of us were dying just a touch, so we went back to the hotel to do our standard afternoon break.

We headed back out to dinner to Gusta Pizza where we dealt with super obnoxious Americans in line waiting to get in (holy. crap.) and sat next to some nice ones while we ate. 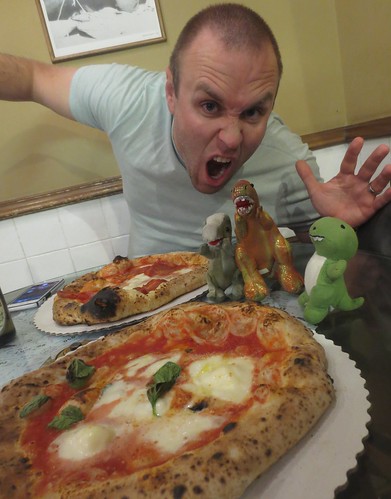 Picture taken before we had company at our table.

Post-dinner, we hung out on the Ponte Santa Trinita, ostensibly waiting for the sunset (mediocre again), but it was just super nice to chill in the gorgeous evening and people watch. 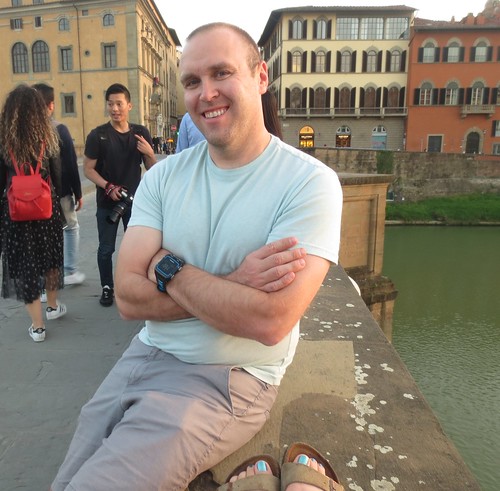 Husband. Probably with a Japanese engagement photo shoot going on behind him, since we saw a plethora of those while in Florence. 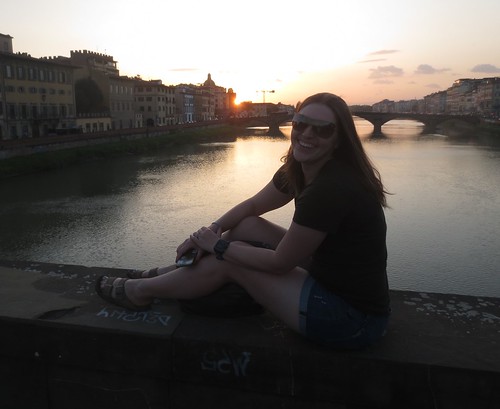 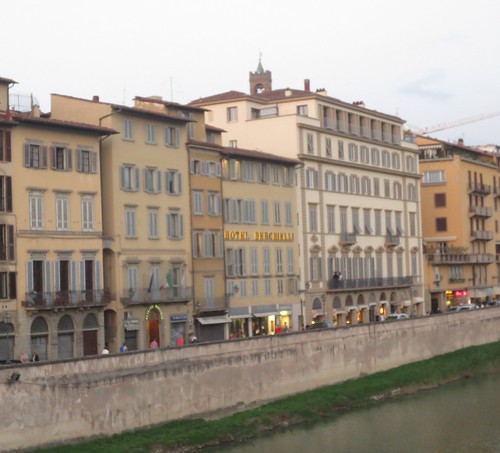 Looking at our hotel, the Hotel Berchielli.