I made it a goal of mine last year to visit all of the Colorado State Parks. I’m not sure if it was a combination of me wanting to just explore the state more, or give myself something to do since I was no longer working or what … but it was an awesomely fun project. This is the first of two posts on the quest. 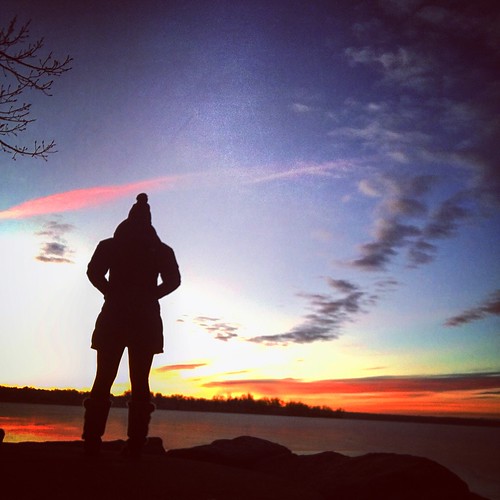 CCSP is also my “home” park. It’s about a six mile bike ride away. I raced my first triathlon there. I often run and ride there. It’s also where I go and catch a lot of sunrises. I figured there was no better way than to welcome in the new year by heading over and catching the sunrise.

Will I return?: Yes. I have often, and will continue to do so. 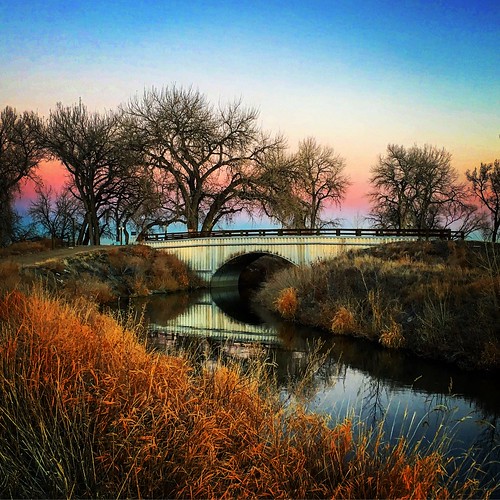 Barr Lake isn’t too far away from DIA (although it’s actually kind of an annoying drive from Denver), and I went and caught the sunrise there. Wasn’t the best place to see the actual sun rise, but if you like watching airplanes, it’s not a bad place to go.

Will I return?: I’d like to. I guess there’s a seven mile long trail that circles the lake and I think it would be great for running. 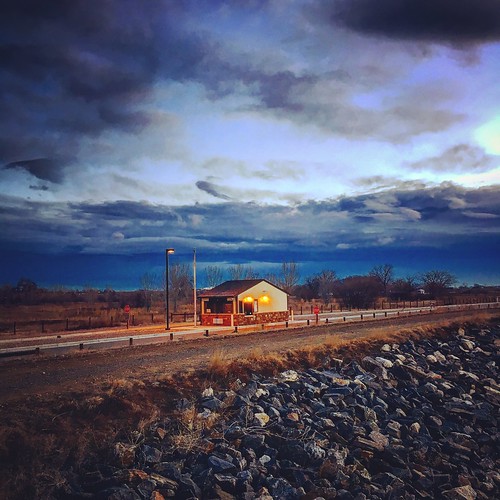 Most of the early state parks I tried to catch the sunrise at … because as we know, I’m a sunrise chaser. There was too much ambient light from the businesses by the interstate to get a good one here.

Will I return?: Probably not. I know there’s camping and fishing here, but not a lot of hiking, and that’s generally what I like to do at parks. 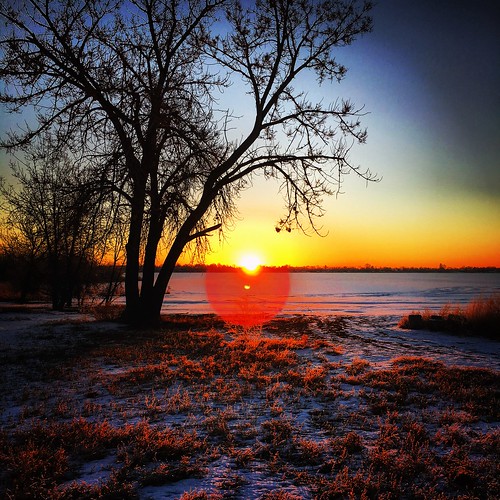 A makeshift hockey rink had been set up on Boyd Lake, which automatically endeared myself to it.

Will I return?: … unless I can be guaranteed some outside pond hockey, probably not. 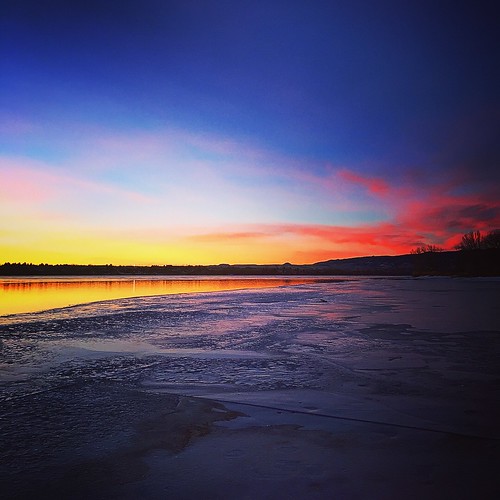 I have ridden my bike into Chatfield more than I have ever driven into Chatfield … but I did see some good sunrises there last year. Less than I would have liked since it’s actually probably more of a drive than it’s worth to get there from the house and half the park is (was?) under construction.

Will I return?: Most likely. I really should try to hit up a few more sunrises there. I’ll also inevitably end up there on my bike at some point again, too. 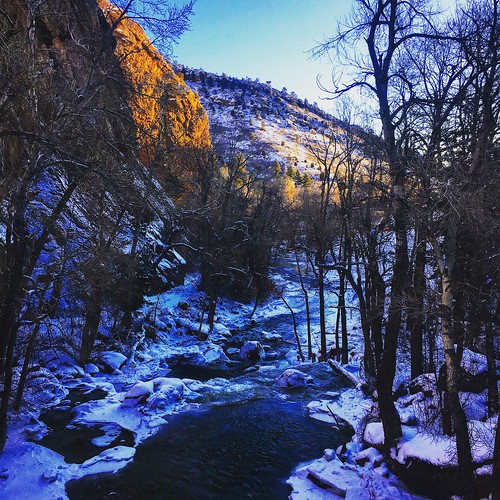 Terrible place to catch the sunrise. I actually didn’t explore too much here, as I went there before a morning engagement in Boulder. Also the road was snow-covered and venturing too far into the park didn’t seem like a wise idea.

Will I return?: Yes. I’d love to go back and actually explore the park some more. I meant to in the summer, but it never happened. 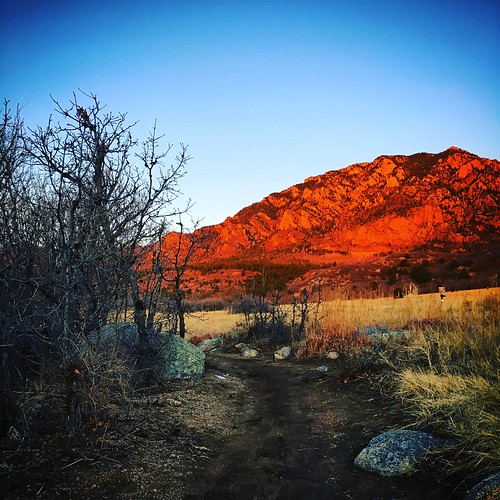 A sunrise trip where I left my poor sick husband in bed. Not a good place to catch the sunrise, but I got to hear morning reveille at Ft. Carson which was pretty cool.

Will I return?: Yes! So many trails I’d love to explore. 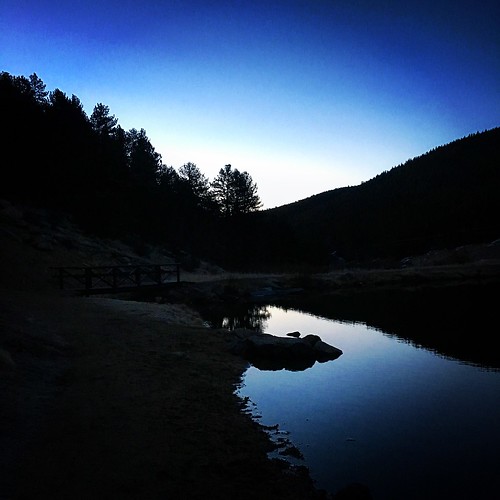 I so hoped to get a good sunrise shot here, but by where the lake is in the park … it didn’t work out. Which was a total bummer, too, because the sky looked awesome on my drive back down into Golden.

Will I return?: Yes! I’d actually already technically been here before. However, I still haven’t managed to go hiking here. Next time. I promise. 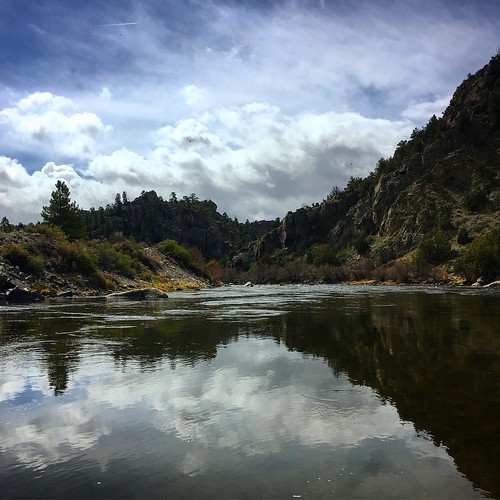 Stopped by to take a photo for this one on the drive back from renewing my National Parks pass. I love this area, so it was no sacrifice on my end. Also of note: first park I didn’t attempt at sunrise.

Will I return?: Absolutely. I love Salida, and I love rafting, and I’ve been rafting on this river/in this area before. I also would love to learn how to kayak one of these days … 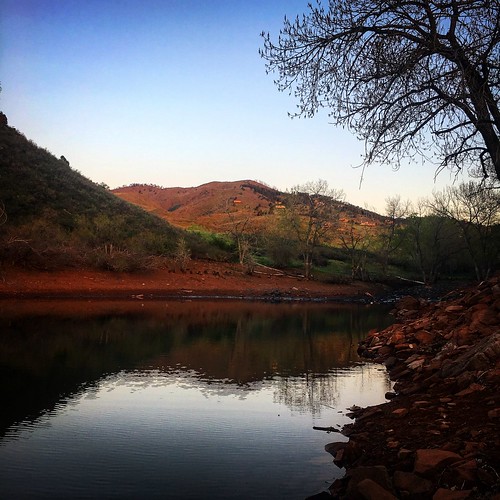 The above is the shot that made the Instagrams, but I had an absolutely awesome golden hour shot (literally golden toned) that I still kind of regret not using. Made an extra early trip up to essentially Fort Collins before heading to pick up B at the airport.

Will I return?: I’d love to. So many fun trails to explore … 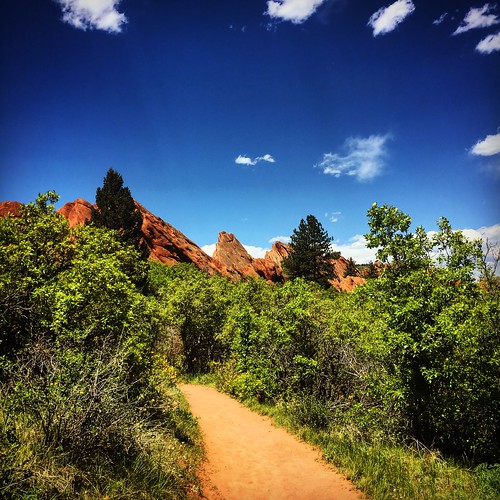 This was an insanely warm day in May … and I’m sometimes terribly unprepared for hiking (I was in Birks) … but this was a fun one. One of the close parks in the Denver metro area (not too terribly far from Chatfield, actually) but one that I had somehow missed and never gone to before.

Will I return?: Yes. In fact, I went back later that summer with B and hiked the same trail. Would love to go back and do some of the more advanced trails. 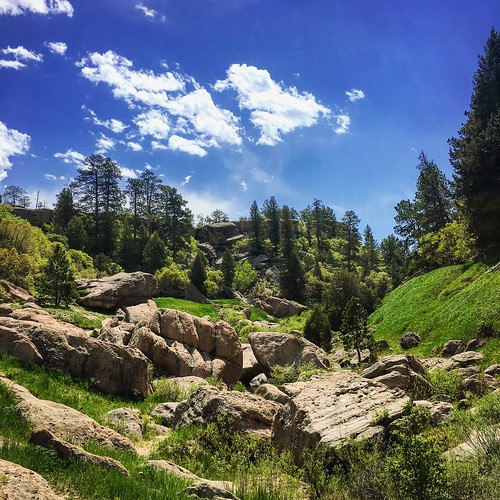 Another park that I’ve actually been to before, but one that I always enjoy hiking around.

Will I return?: Yes. And ideally I’ll actually head to the other end of the park and hike around there instead. 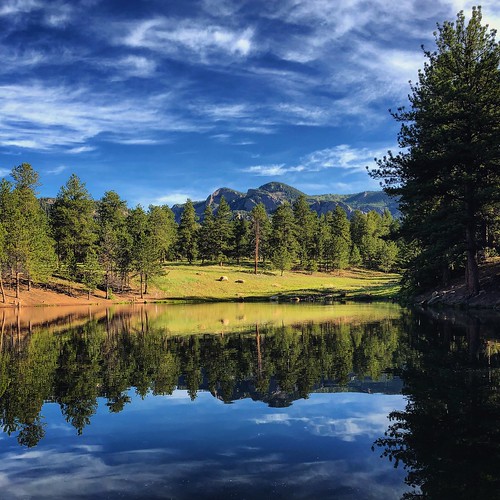 Clearly by now you notice that I ideally like hiking to water … and I do whenever possible. This was one of the shortest hikes in the park, but it was pretty.

Will I return?: I would love to, especially for some of the longer hikes. 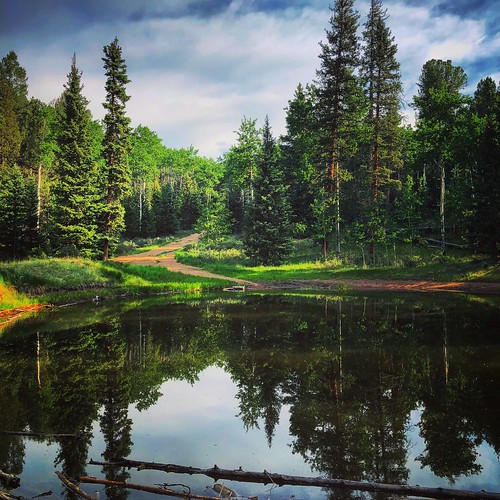 Lost Pond, found. I had some adventure at this park – finding an open bathroom before I even started hiking, and then finding a trail that sounded interesting … it was a morning.

Will I return?: I would like to, yes. I enjoyed the small hike I did and would love to do some longer hiking as well. 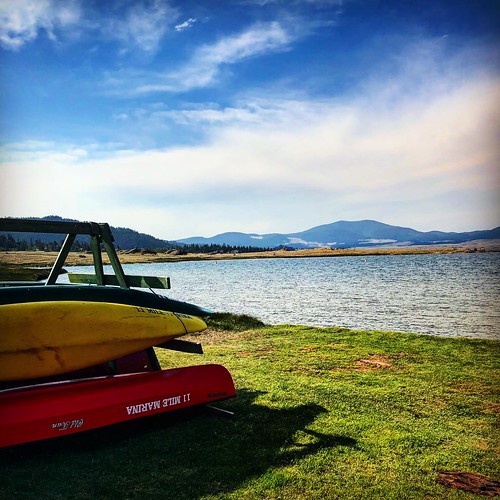 From here on out, you’ll notice that I actually hit up quite a few parks on the same day. Some are grouped closely enough (and far enough away from home) that it made more sense to just knock out a whole bunch in one day. Mueller, Eleven Mile, and Spinney Mountain made sense to hit together, though I spent the most time at Mueller.

Will I return?: Unless I feel like renting a canoe/kayak … probably not. Although I could get in some nice OWS … 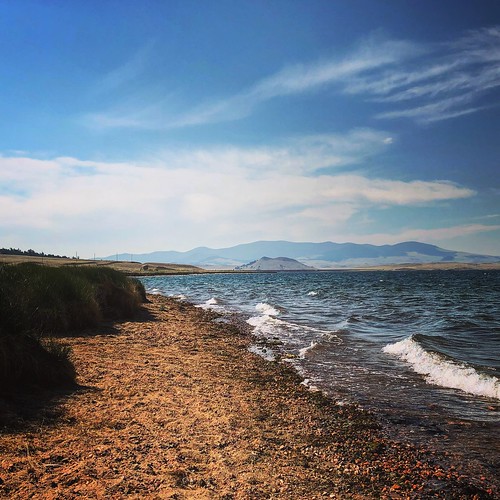 You literally had to drive through Eleven Mile to get to Spinney Mountain, so obviously those two were getting clumped together. The drive to get to all of these was pretty awesome, and on my back through to the Springs (you head out on US 24 to access these parks), I actually saw a bear run across the road, so that was cool.

Will I return?: See above for Eleven Mile. Unless the husband wants to fish … probably not. 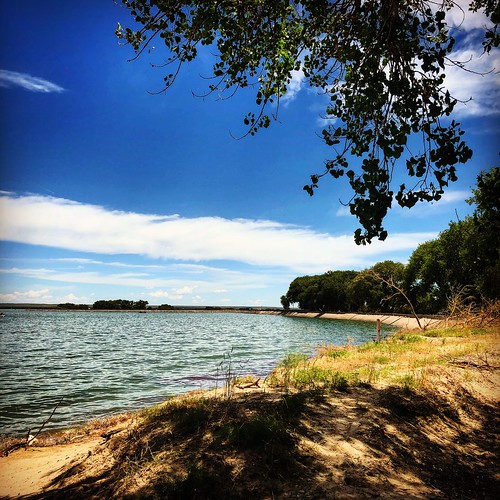 One of two state parks in the northeast corner of the state. There aren’t many on the eastern plains, which is a shame, because I feel like it’s an under-visited (read: boring) part of Colorado. Which it’s not – well, compared to mountains, I get it – but it has its own beauty.

Will I return?: Probably not. Not only was it a pain to get to (fun adventure, but still a pain), it didn’t really have the things in it that I’m interested in (hiking, mainly). 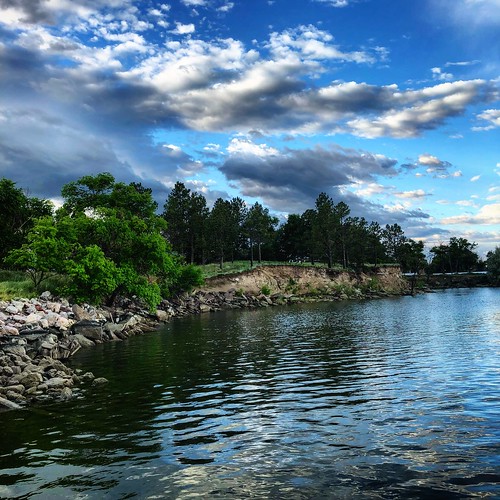 In theory, I was supposed to race a tri here, but I ended up not feeling it. That definitely wasn’t the park’s fault, though.

Will I return?: I’d actually like to. Whether to try the same race again, or just to visit, I actually liked this one more than Jackson Lake. Although hopefully there will be fewer gnats swarming next time … 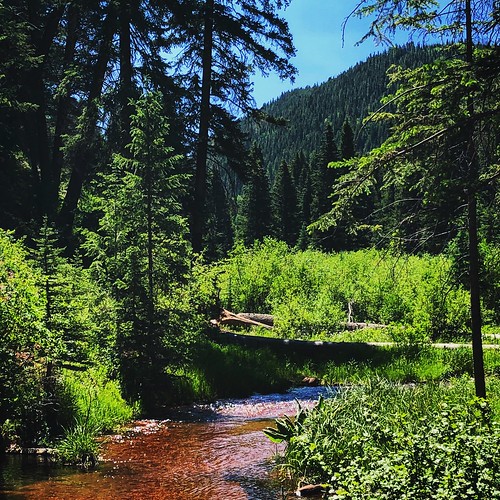 The last on the list that I had visited before. Sylvan Lake is just outside of Vail and therefore somewhat accessible. I had previously visited the prior October, before the lake went under construction, and did a nice hike around it.

Will I return?: I’d like to. I’m sure there are more trails than just the one around the lake, and I’d like to find them. 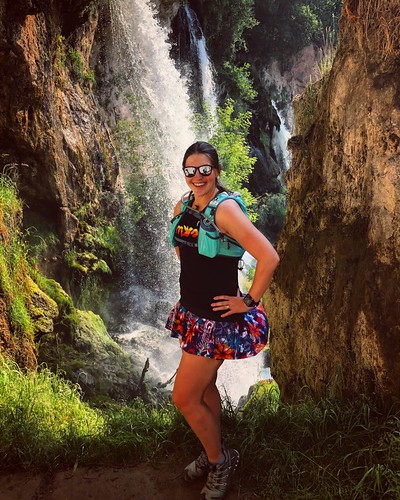 For my birthday, I wanted to hit up a few more parks, and there’s a cluster of three just outside of Rifle. As I love waterfalls … that was the plan. I got to do a nice hike to the falls (although you could park at a much closer lot and just walk to them). There are also some fun little caves around the falls that were fun to explore.

Will I return?: I’d like to! This was definitely one of my favorite parks … but that could be just because I’m a sucker for waterfalls. 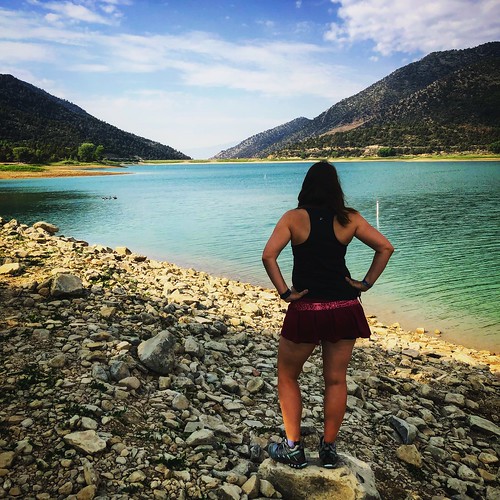 (forgive the fact that I’m in pretty much all of the July photos and in different outfits; #31daysofSkirtSports is a thing in my world and I did a lot of outfit changes …)

The lake here was super low, possibly because of drought, or because of usage. Or both.

Will I return?: Doubtful. Looked kind of boring and also looked like it didn’t get a lot of funding in general. 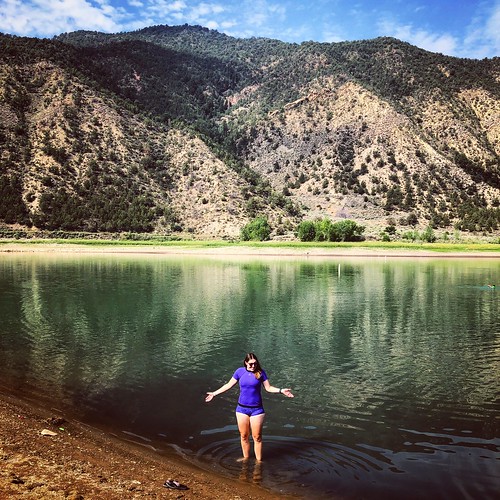 I would have actually considered swimming here had not the air quality been so bad due to fires. Also technically should have been the first park visited as you pass by its entrance prior to both Rifle Falls and Harvey Gap, but we went to the furthest park first and then worked our way back out (opposite of how I did Mueller/Eleven Mile/Spinney Mountain).

Will I return?: Probably not, but I can’t say for sure.