Back again, this time after breakfast!

Yesterday was fairly lazy. After we ate, we essentially stayed in bed with our compression gear on until about noon. I was able to find a relatively comfortable spot to read in so I grabbed on and enjoyed it.

Around noon, we finally started moving. First stop was Boots to get more ibuprofen. We then stopped at Starbucks for a bottle of water and we got more travel mugs. They had a fun thing on the menu board with actual instructions for customers to order their how-you-like-it frappuccinos. I think we need that back in the states since people STILL don’t know how to properly customize their damn drinks. We also chatted with the barista at the register on visas and traveling and whatnot.

From there, we went into Green Park and took the meds before strolling down to Buckingham Palace through the Canada Gates at Green Park. We took a few of the requisite photos 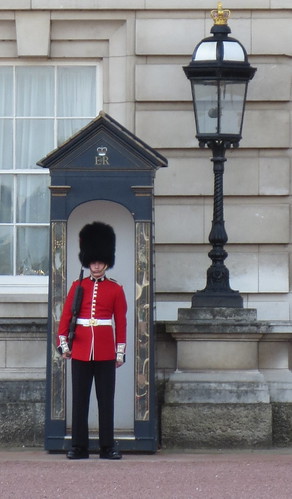 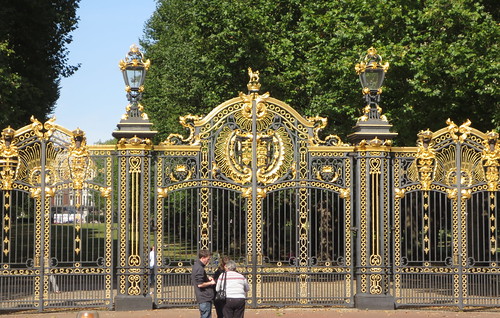 and then headed back towards Knightsbridge. We stopped for lunch in the National Geographic Cafe (we’d been in the store a few days prior) – Brandon had a sandwich and I tried some grilled sourdough (too grilled) and the soup of the day – a mushroom parmesan (too much parmesan). Essentially, lunch was a fail for me.

After lunch, Brandon stopped in a cafe for a slice of lemon cheesecake and an Americano. I stopped in Topshop, a British clothing store I always read about. It did have quite a few cute things in it, but I didn’t get anything for two big reasons:
1.) stuff was really pretty expensive (and the conversion rate was ridonk – 2 to 1? srsly?)
2.) I really couldn’t find a damn thing in my size
It was really kind of depressing, honestly. It made me feel broke (which I kinda am) and fat (which I’m not comparatively, but in the world of fashion, yeah I am). So that was fabulous.

Depressing aside, we headed back toward the hotel, discussing deep issues along the way. Why does it seem like everyone over here can afford this ridiculously expensive crap? Why do I feel like a broke-ass piece of crap when America is supposed to be so wealthy? Brandon explained it as they’re taken care of over here – they a.) get paid more in the more-menial jobs; and b.) get retirement taken care of thus eliminating the need to save. Essentially, kind of what the Democrats want, if we’re going to get political. And it really made me think … is that really so bad? It seems more “fair” … and yet I know the systems over here aren’t quite as awesome as they seem on the outside given economics and stuff. It made for some really deep thinking that I still haven’t figured out. I think I’ll need to do some research when I get home.

In any case, we stopped at Marks and Spencer food market on the way back to the hotel. Brandon ditched me to go back to the hotel because he needed to pee, so I stayed to wander and pick up a few things – a bag of crisps, a bottle of sparkling water, shortbread for me, Twix for Brandon and a profiterole dessert to try (it was okay). Then back to the hotel for a few more hours of vegging out and reading.

Around 7p, we went back out again. We wandered down toward Piccadilly to find some food. Neither of us were horribly hungry, so we just ended up getting 2 pound pieces of pizza from a cart … that tasted like crappy 2 pound pizzas. Blech. We wandered a few different paths after that, including into the Chinatown area. 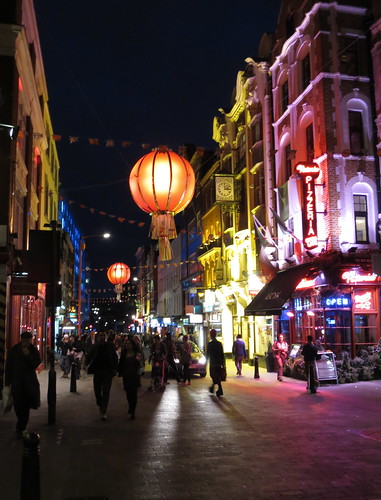 We also had another fairly deep discussion – basically on why I’d been kind of quiet the last few days (besides being in pain).

I explained it as that I’ve been finally been able to truly relax on this trip. Everytime (well, virtually every time) I or we have traveled, it’s always been go go go with lots to see and very little time to see it in. We know we’re in said locatino for so little time that we need to maximize the time we have. We did it in Paris, for example. But in London, we have so much time that the first day here, we said we had time – plenty of time – to explore and see things. So we have taken our time and relaxed. And yes, that’s meant a decent amount of time in the hotel room reading, guilt free. I haven’t worried. Except for an uncomfortable bed and some pain, I feel almost free. There are money worries lurking in the back of my brain (because it’s ass-expensive here; see earlier), but otherwise, I’ve essentially been able to truly decompress and relax for the first time in who knows how long and it’s been really, REALLY nice.

Our wandering got us onto some quite possibly sketchy streets, so we made our way back to tourist land and actually found a donut shop. It was a very expensive donut shop – 1.75 for a doughnut which is what, $2.75? $2 more than most places! – and they were quite horrible, but it was fun 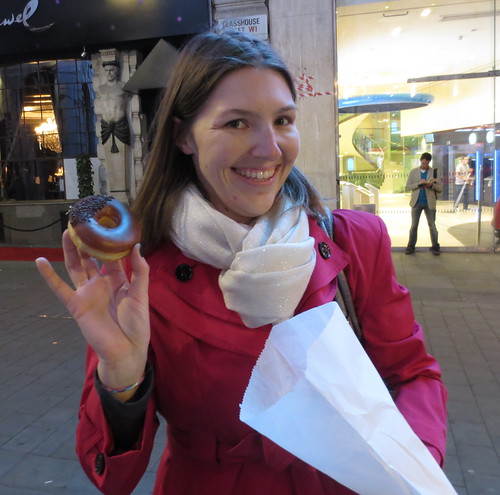 and made us laugh, which I think we both needed at that point.

After finishing up those awful pastries, we popped in another Boots – ideally to find something cheaper to drink, but they failed on that. However, we were able to find the stupid toothpaste his mom wanted as well as a few Cadbury bars for mrrface. We got those and headed back to the hotel, stopping in M&S again for drinks and, for me, another bag of crisps. Stupid salt.

Once back at the hotel, Brandon made me take a sleeping pill, but I don’t really think it worked too well for me. I dunno. I slept, but I don’t think as deeply, soundly or as quickly as I should have.

Still, back up this morning, then breakfast, then shower and now, off to start the day.

Author’s note: That Chinatown photo is probably the photo I’m most proud of from the entire trip.