Since I’ve been with B, I’ve managed to go on one whole trip with him as my pilot. And by pilot, I mean literally, he’s the one flying the airplane. That trip was back in … 2009 or 2010 when I went with him up to Fargo, N.D. Exciting, no?

Since he made it to Delta, he’s been wanting me to come with and preferably to one of his long layovers. We were finally able to make it work last week when I tagged along on his trip to Costa Rica.

To make it out okay, we left on the first flight to LAX Tuesday morning. We kept the day fairly low-key (errands and the beach) as, since we were taking the red-eye flight, a nap had to happen that afternoon. Late late Tuesday night, I hopped in the back for his red-eye to Costa Rica (LIR). On the flight, I finally watched “Coco,” which was really cute. I also didn’t sleep, because it’s me.

We got into LIR about 6:30 Wednesday morning. I popped on the shuttle with the crew to the hotel (which, for company reasons, I’m actually not allowed to mention. Sorry.) … and proceeded to almost puke on the way. I was already kind of nauseous from not having eaten in quite some time plus having been up all night, so a rollercoaster-y van ride? Not good.

At the hotel, we got me an extra room key as well as paid for me to join in on the all-inclusiveness, quickly changed, popped down to the buffet for some breakfast … and then back upstairs for some SLEEP. Four-ish hours later, we woke up and went for a short (hot, humid) run to shake off the cobwebs. Because it’s me, we also got stopped and asked for directions which I hope we were able to do given the language barrier.

We literally ran to one of the other buffets as our ending point so we could eat some lunch. Food consumed, back upstairs to shower and then head back down to hang out at the pool. 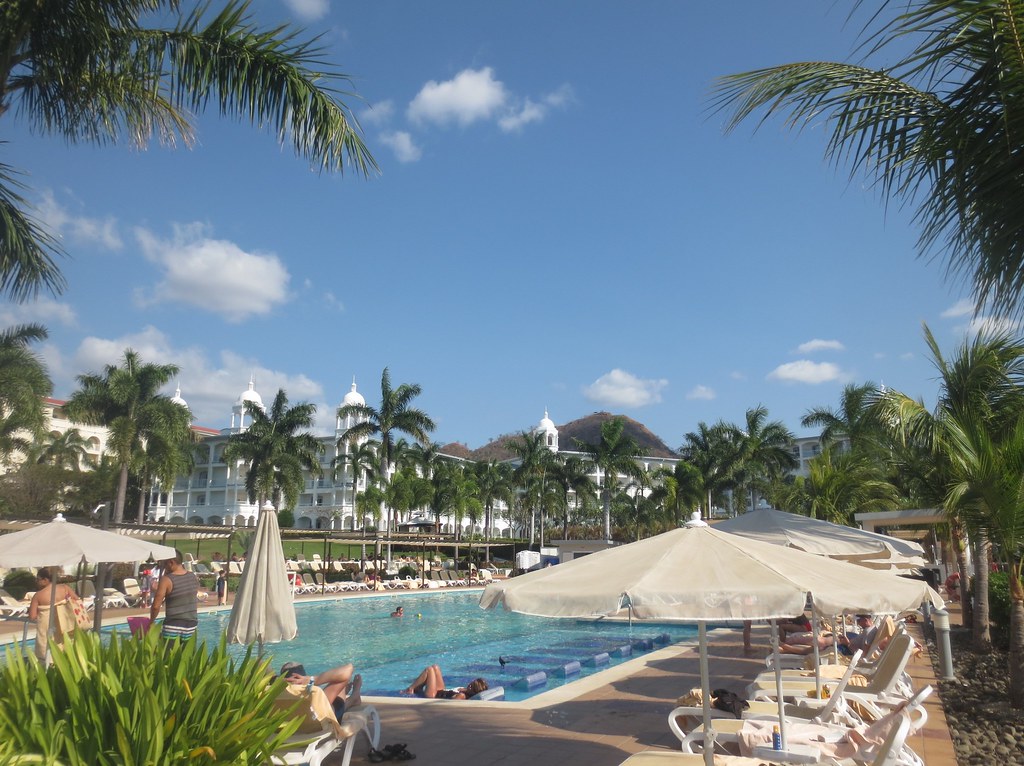 Looking at the resort from the back of the property. 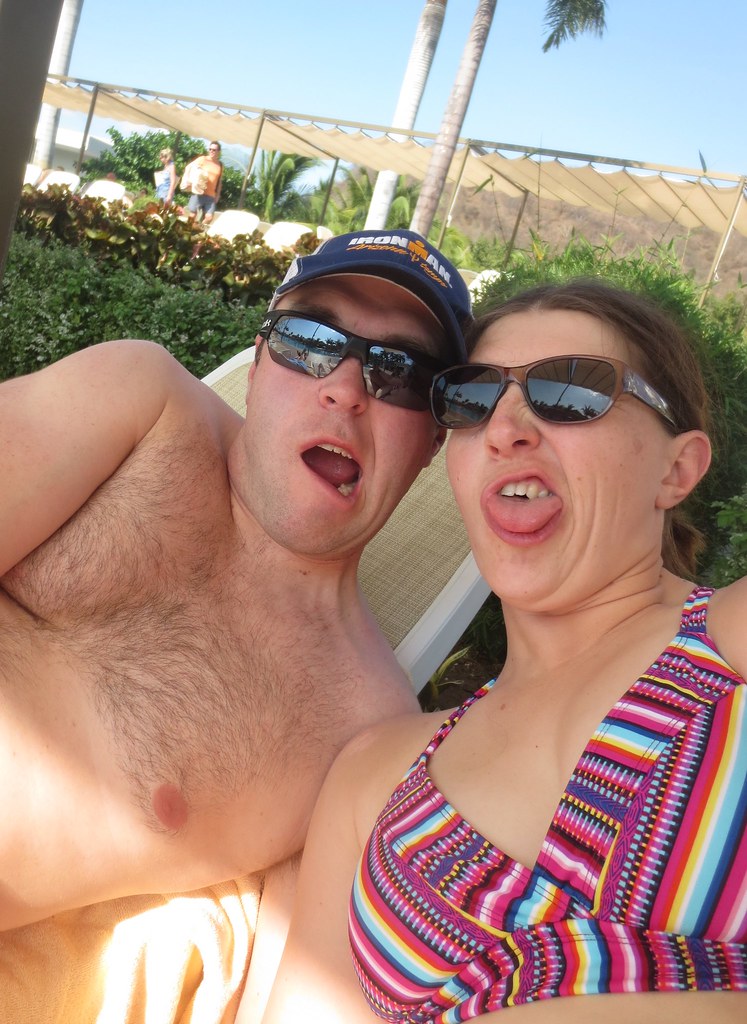 We hung out for a couple hours before venturing back upstairs to chill for a little bit. 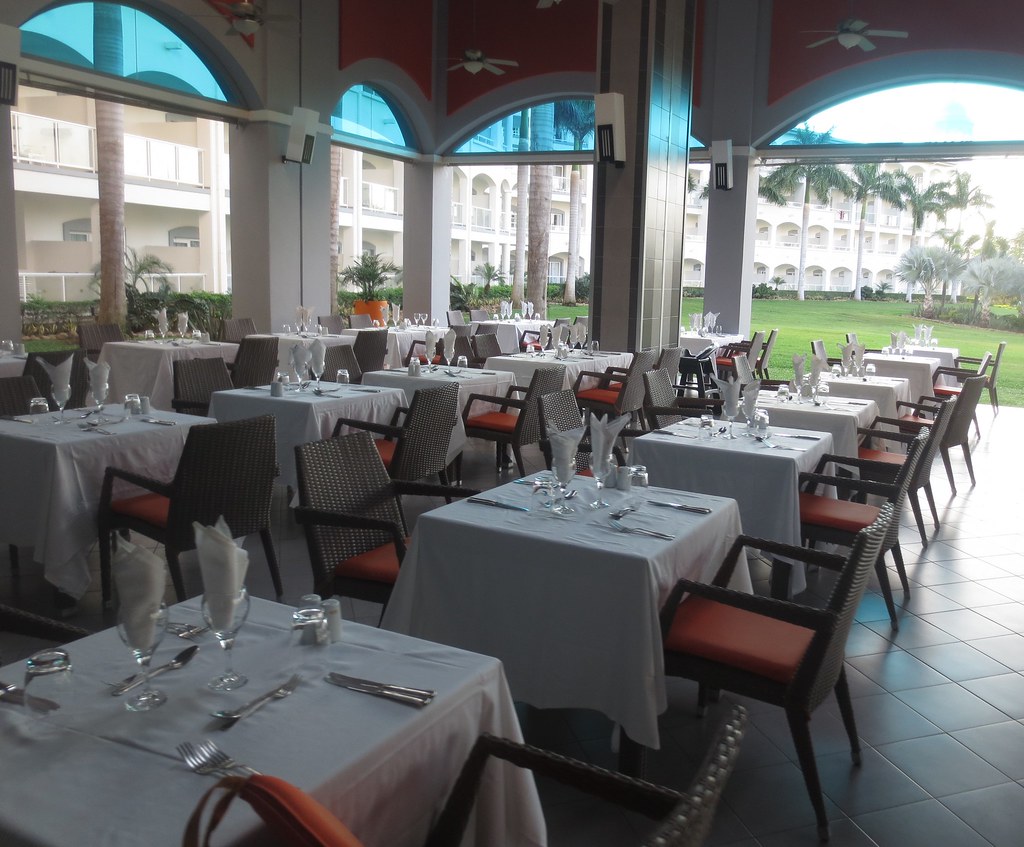 Outside seating for the breakfast/dinner buffet.

Since it’s me, I wanted to try to catch the sunset, so we walked down to the beach before dinner to do that. 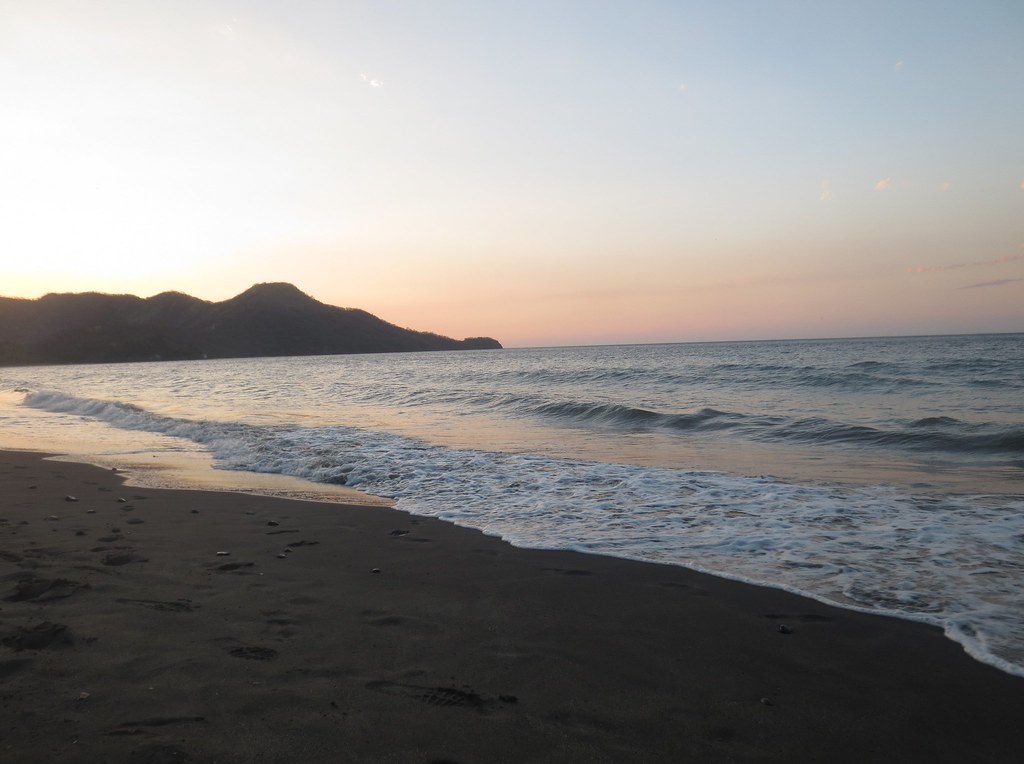 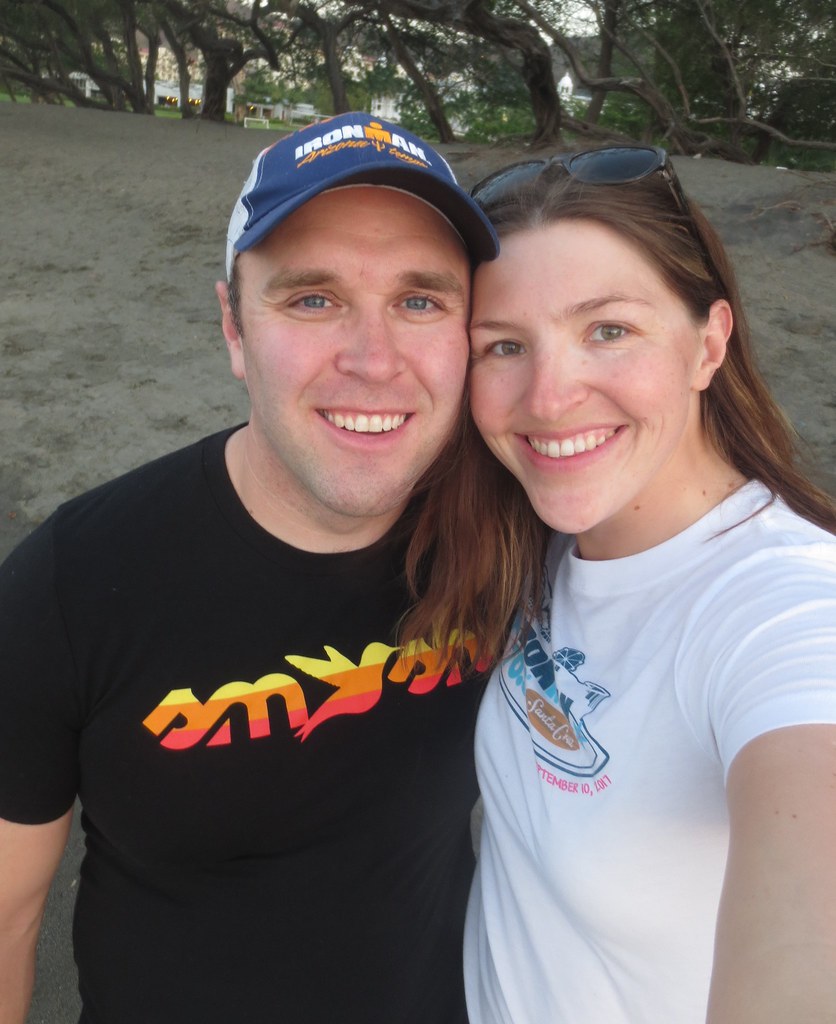 We weren’t quite at the best angle to catch the best sunset, but it was still pretty awesome. There are quite a few restaurants on property that B has eaten at for dinner, but none of the menus were calling out to me, so we just decided on the buffet again. 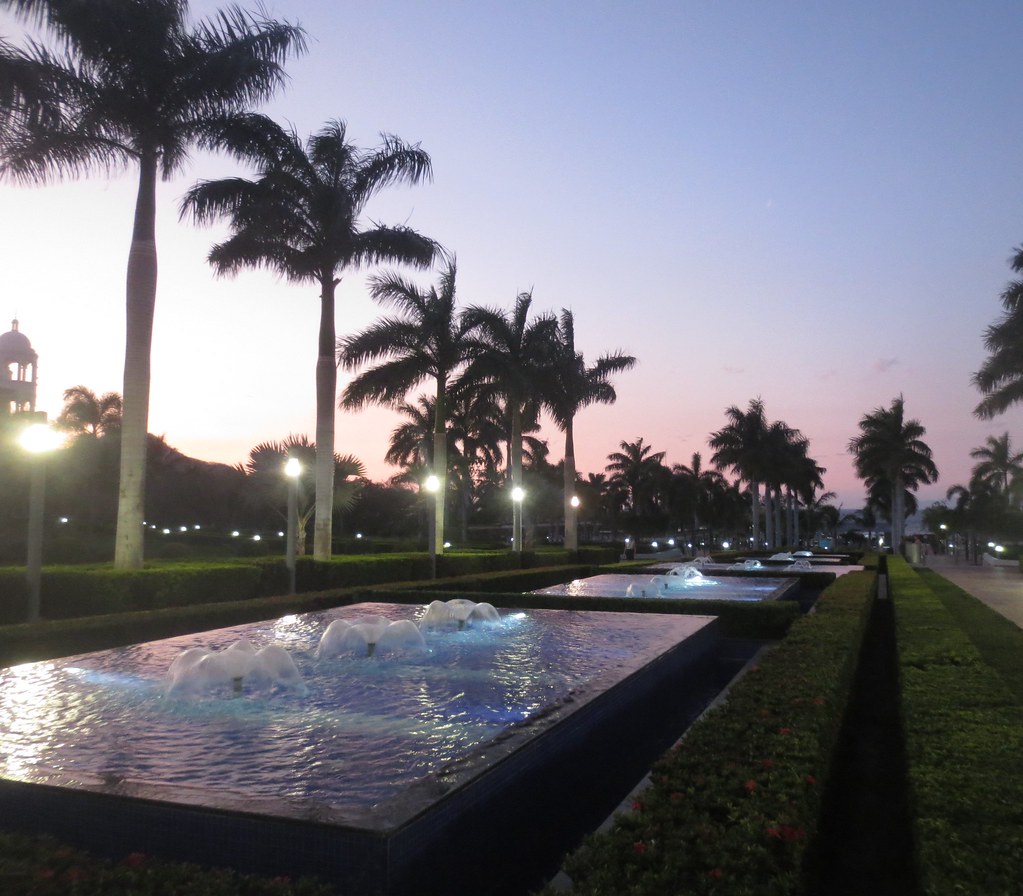 Fountains leading down to the pool area. 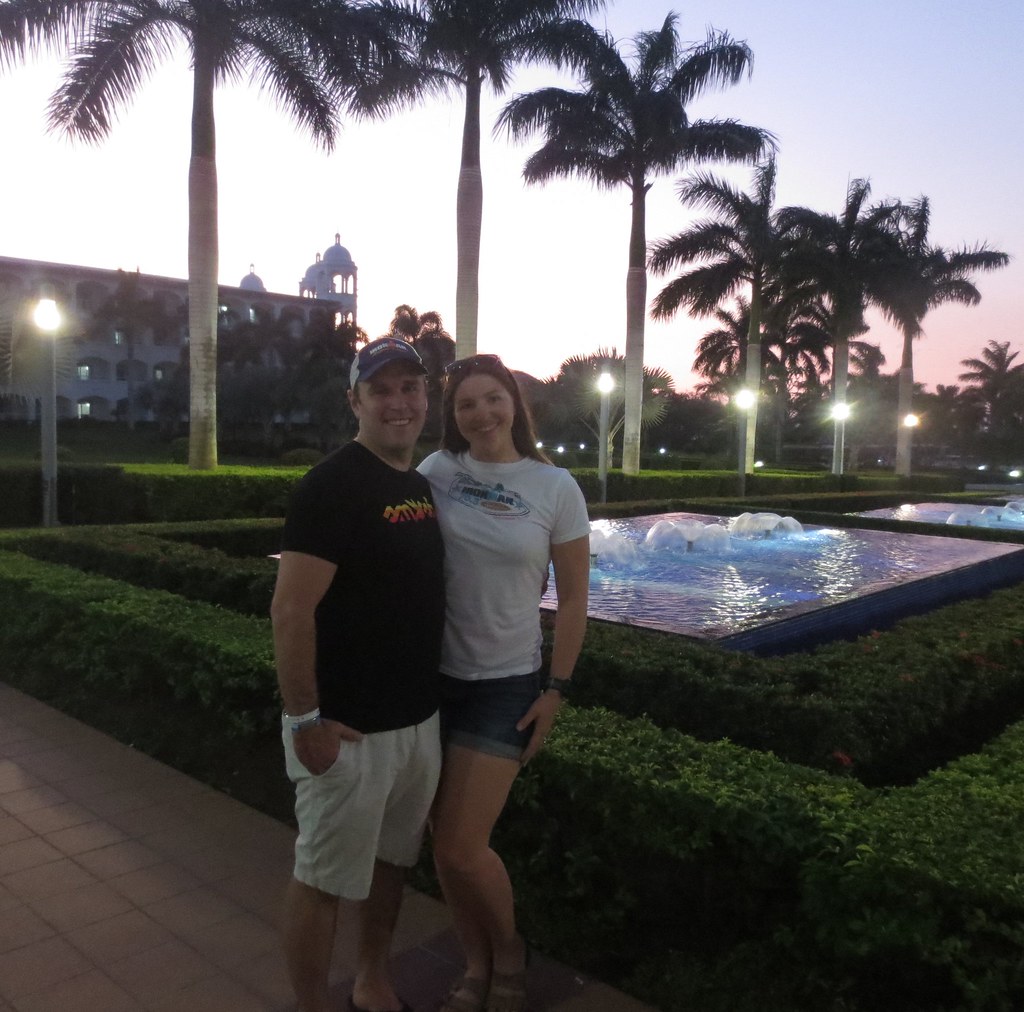 Ran into one of the flight attendants and had her take our photo.

Dinner wasn’t bad, but the food kind of got progressively worse throughout the day. Breakfast? Good. Lunch? Not bad. Dinner? … well.

We stayed up a bit later than we probably would have wanted just because B needed to take the online Jeopardy! test, but whatever.

The next morning was pretty relaxed. We went down to breakfast, down to the beach and around the property to take some pictures, and then to the fitness center to get in a workout. It was super busy when we got there, so I got in a bit on a stationary bike and a much smaller lift than I would have liked. 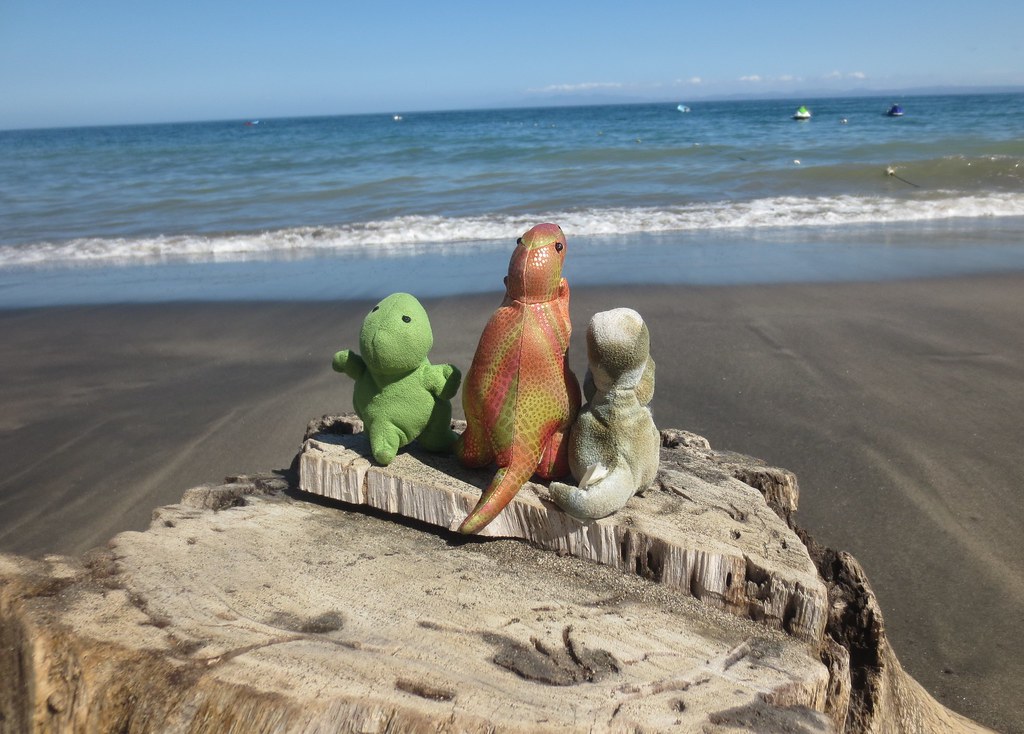 Dinosaurs looking out over the ocean. 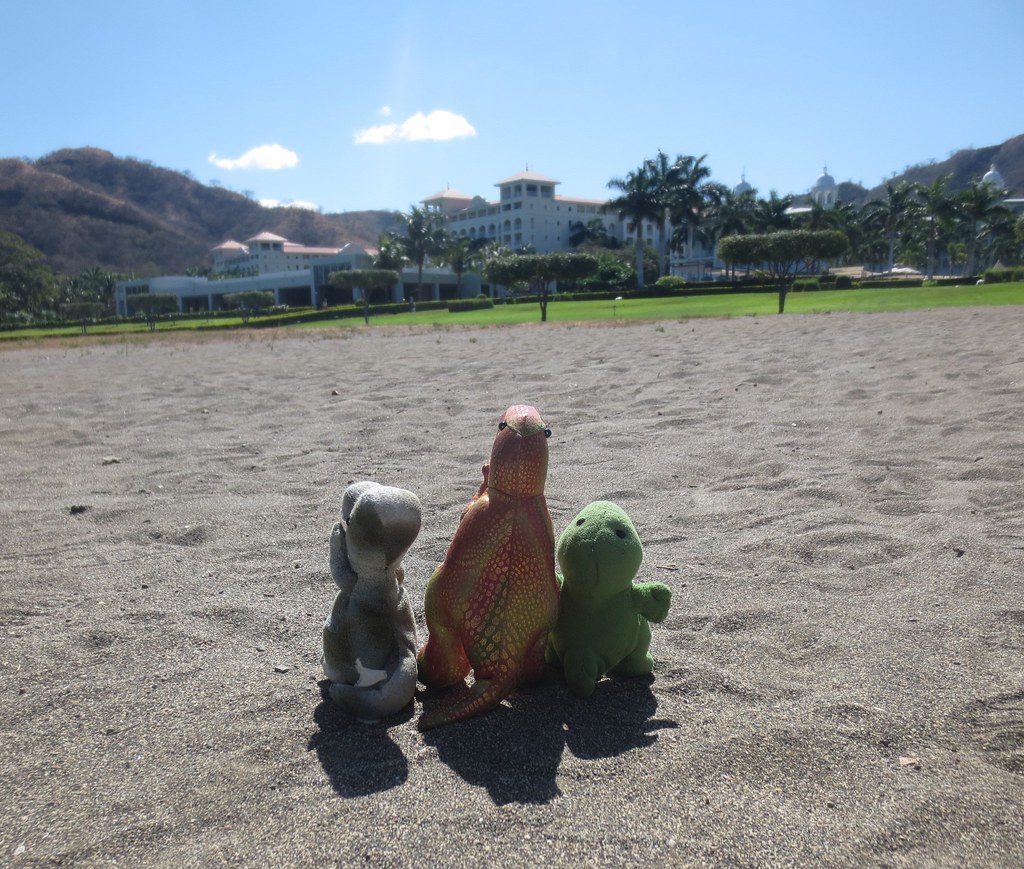 Looking back at the property. 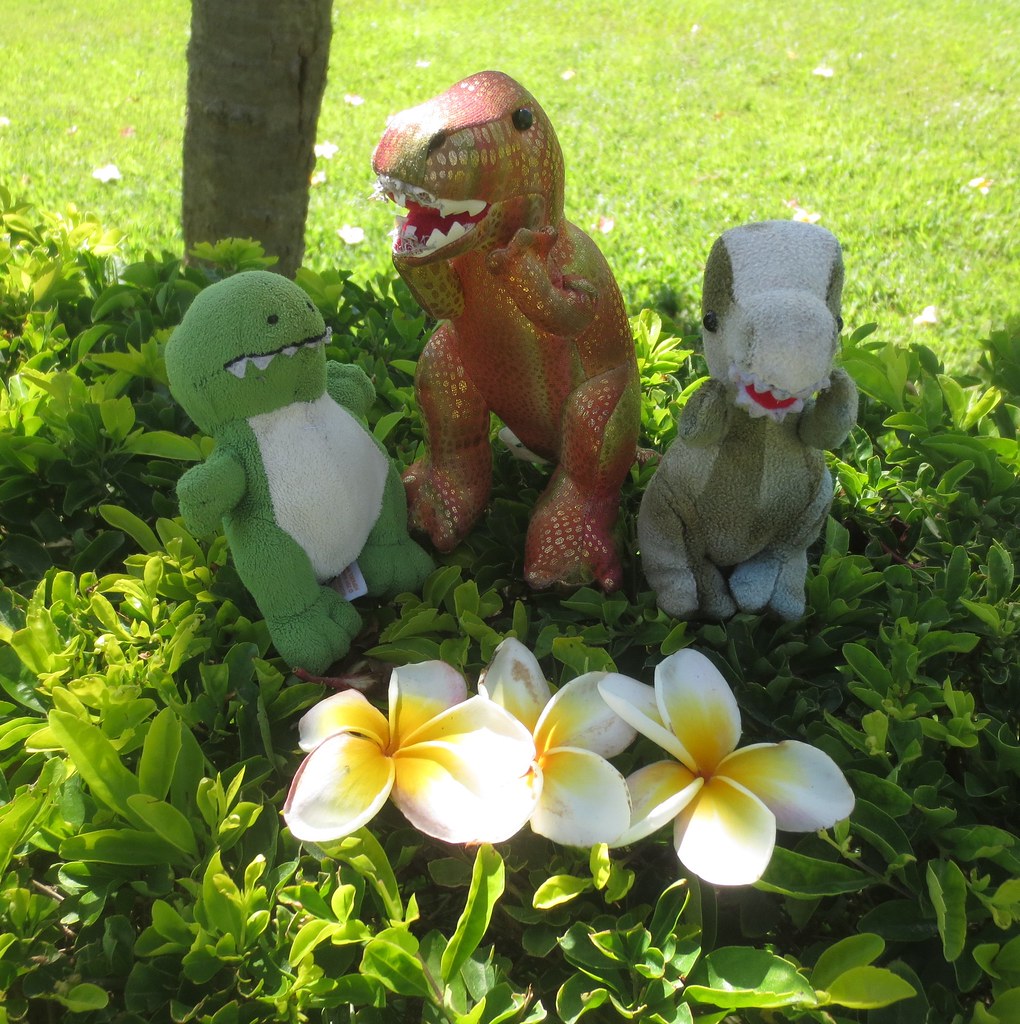 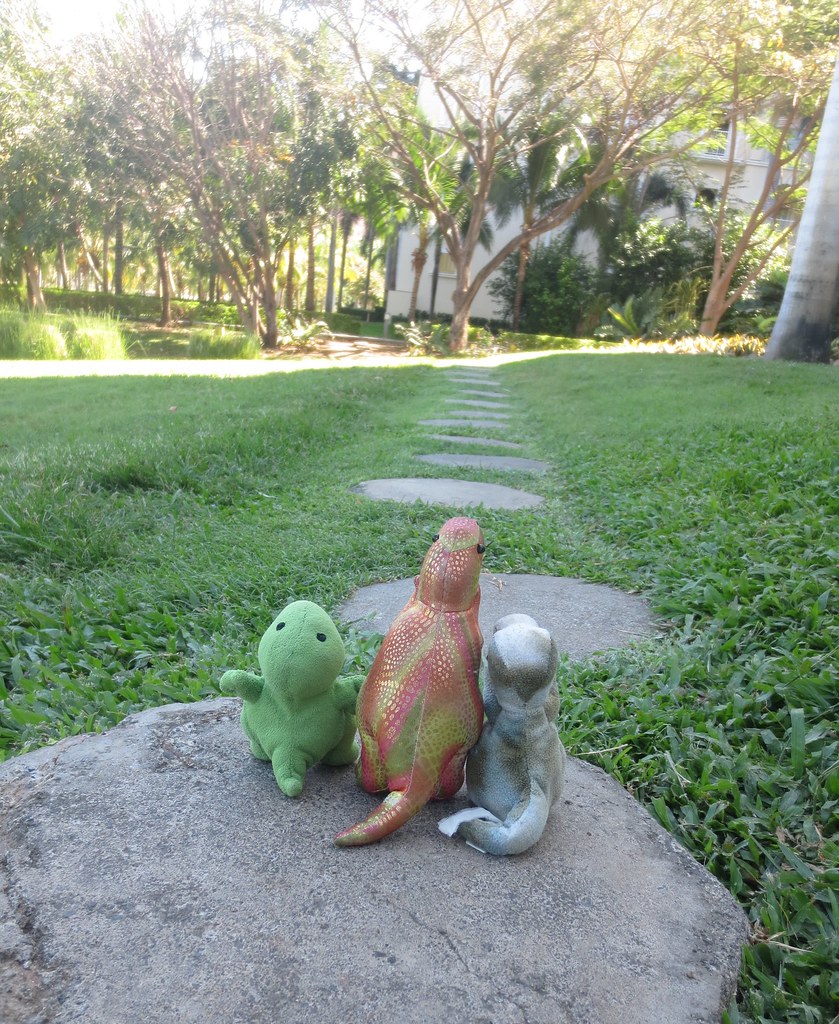 On one of the shortcut paths. 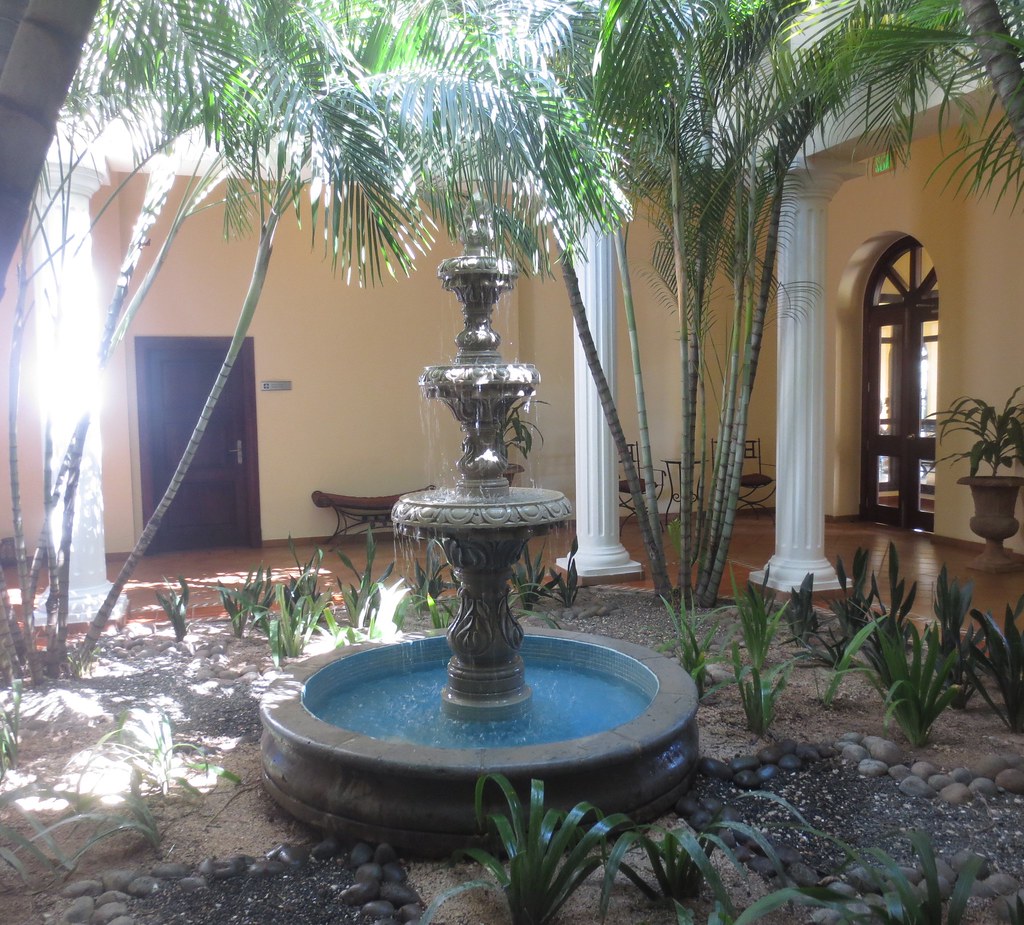 Fountain in a courtyard in the spa/fitness center building.

After the workout, we showered, packed up, and caught the van back to the airport. I made it out of Costa Rica just fine … but I should know better than to try to non-rev through Atlanta late on a Friday to Colorado in not only ski season but also spring break season. Needless to say … I spent an unplanned night in a hotel and we used points to get me home late Saturday evening.

Despite my woes getting home, it was nice to be able to ride on a plane my husband was flying as well as experience one of his favorite layovers. 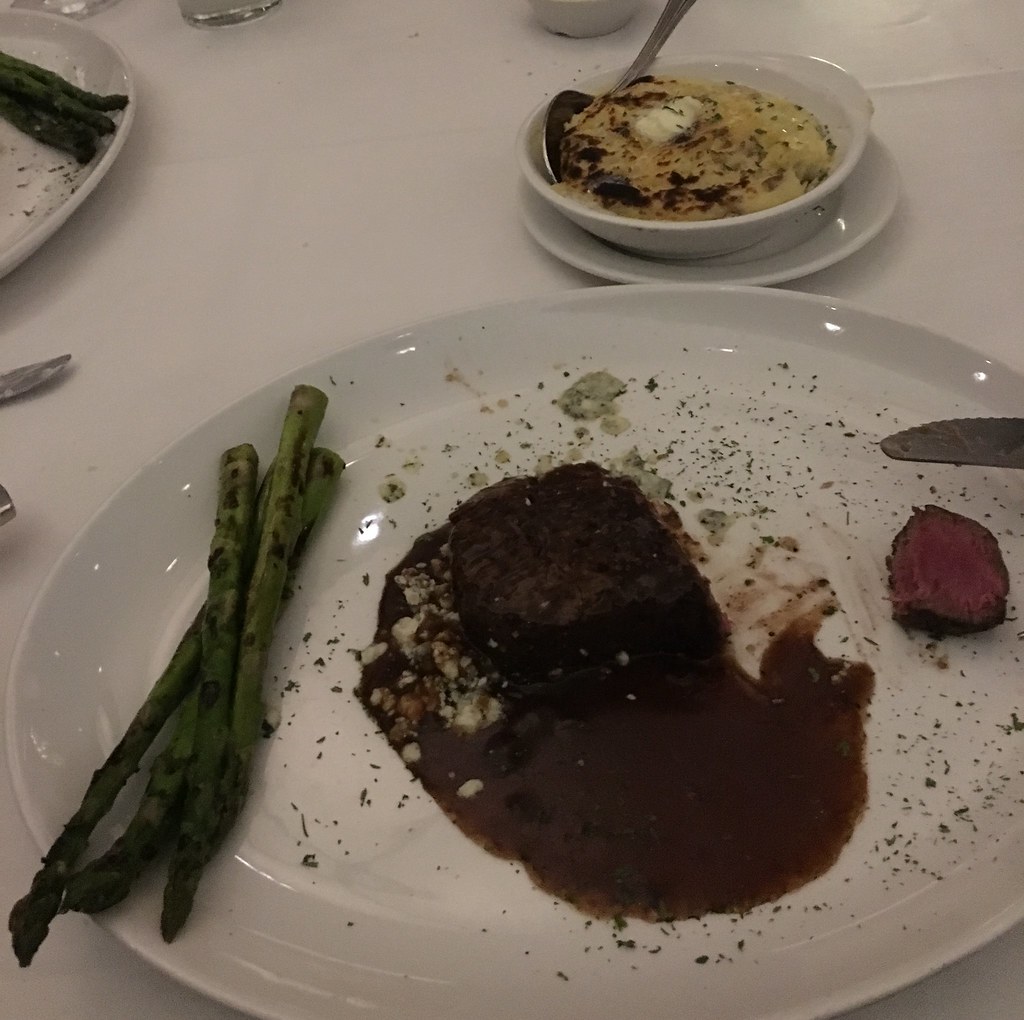 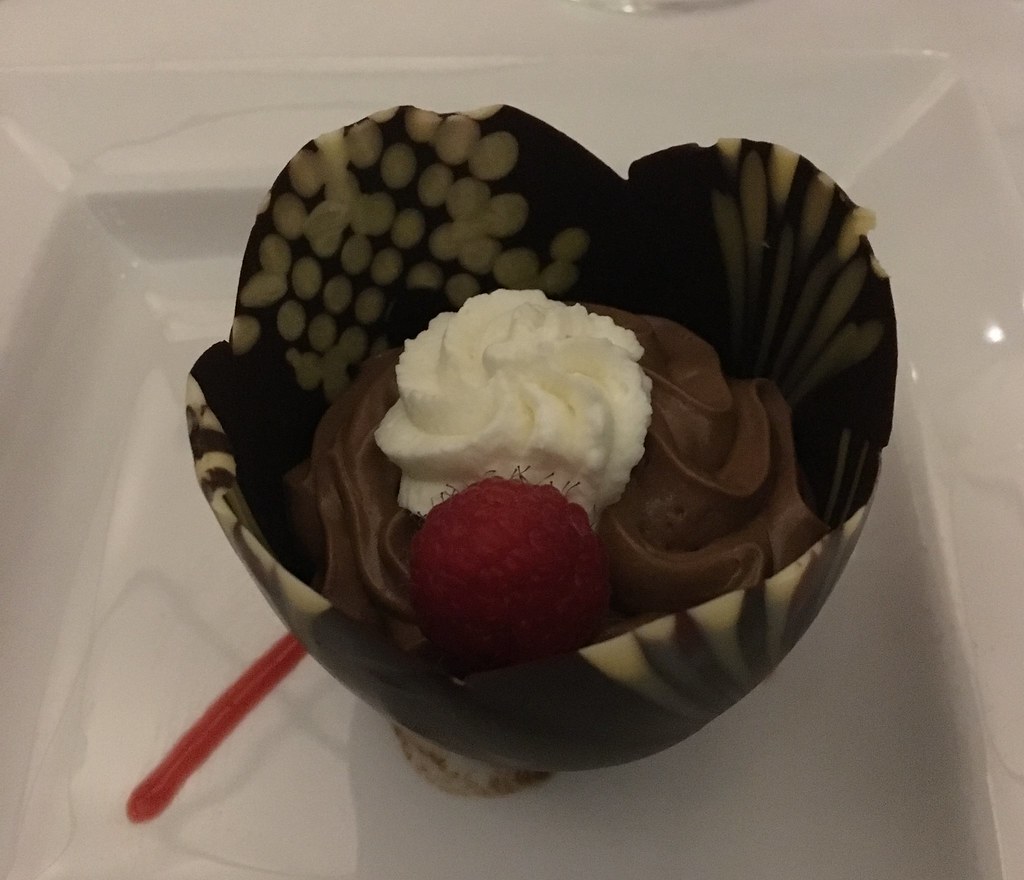