i saw them only once, early in the morning
the passage of the
plains ghosts
wisps stealing across the sky.
the sun was burning through the clouds
creating an eyeball,
watching,
guiding,
urging.
steadily they floated
methodically they made their journey
going south to north
venturing wherever it is they go
all the while
i kept driving
watching the solemn parade.
.
.
.
.
.
.
.
.
.
.
an explanation for the clouds, 9.26.19

(Driving across NE Colorado on that trip to Wisconsin, I saw some strange clouds and they begged me to write their story.) 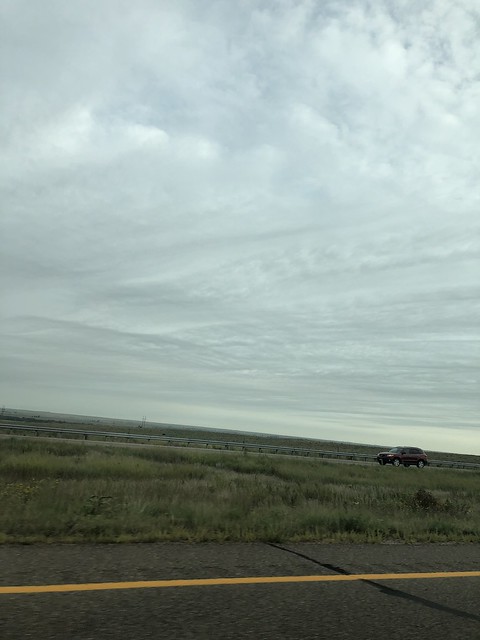 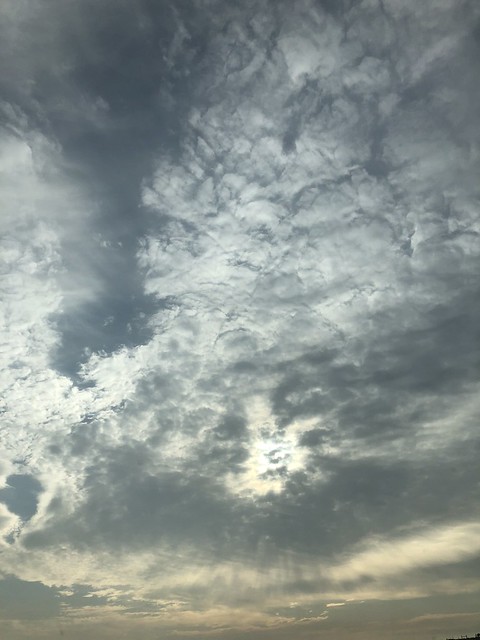 It gets lost in the photo, but it really did look like an eyeball to me.

In which we road tripped to Madison, Wisc., so I could go race another IRONMAN.

As we do, we left early on Wednesday morning. 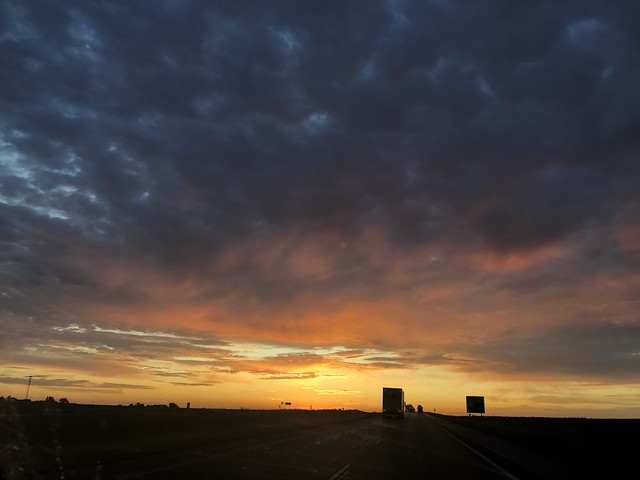 Our hotel reservations didn’t start in Madison until Thursday, but the first day of race check-in was ALSO Thursday, and I know if I don’t want to wait in a long line, I get there the first day. So we left Wednesday and drove to Dubuque, Iowa (much like I did for my Shinedown trip back in May).

Mostly, a long boring day in the car. Thanks, head winds. But I didn’t get lost this time! We also stopped at the same Chick-fil-a in Dubuque I did back in May to get a whole bunch of chicken sandwiches with extra pickles for bike food on Sunday (go read the tri blog linked above for more on that).

First things first, I realized I was missing an IM road trip tradition, so I took care of that. 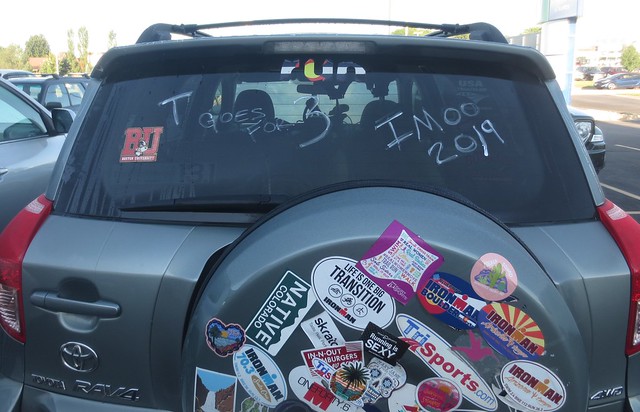 Then, it was on to Madison … with first a stop in Verona to get a cappuccino at n+1 Coffee and Beer (inside Rocket Bicycle Studio) because I really liked it last time I was in town. 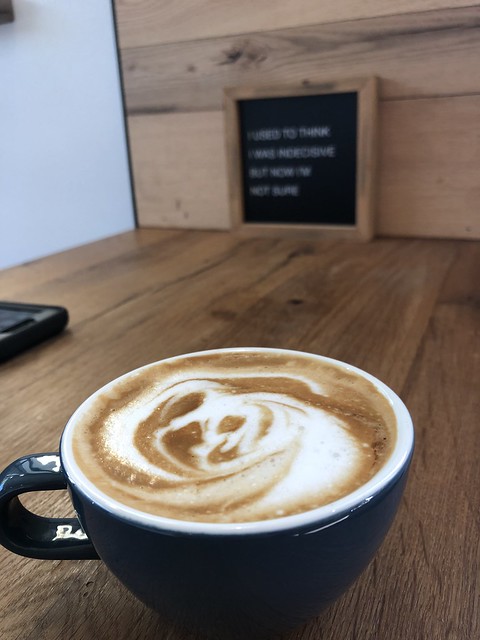 Plus we got to talk to one of the owners, Jessica, who gave B a whole bunch of good tips for coming down and spectating on Sunday, as the bike course goes by their shop twice. After coffee, we stopped at the cute little grocery store in town for a doughnut (as I remembered them being good) and a few other things (bottled water for my water bottles, apples for some fiber (mostly for B), mini Dr. Peppers for special needs) before heading off to Madison.

Our hotel room was ready when we got there (stayed at the Hilton Monona Terrace), so we got checked in, unloaded the car, and then I headed literally across the hotel sky way to the Monona Terrace Convention Center to go get checked in for my race. 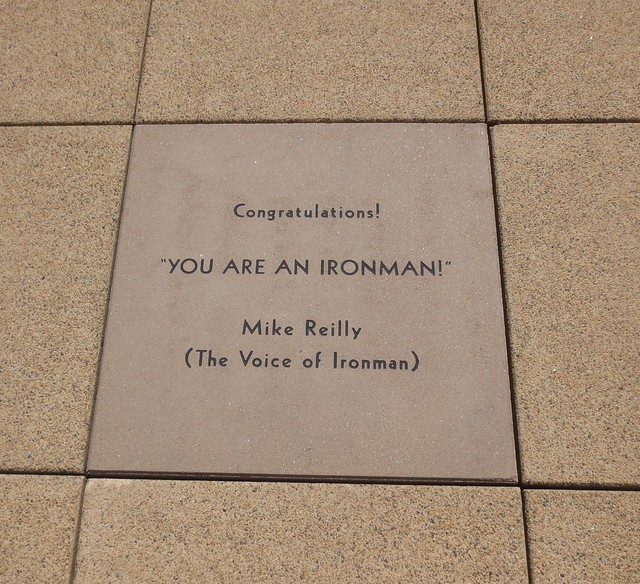 This is on the tiles outside.

After I got all checked in, I was starving, so we quick dumped off my IM crap upstairs and then headed to the Great Dane for lunch. We ate at a couple Madison “must-dos” on this trip, and the Dane was one of them. 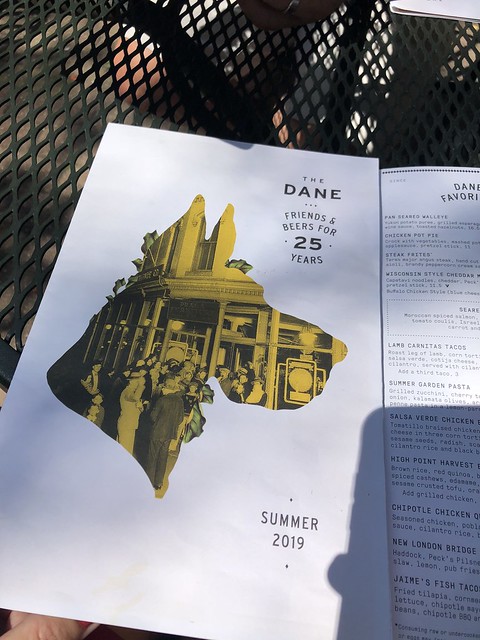 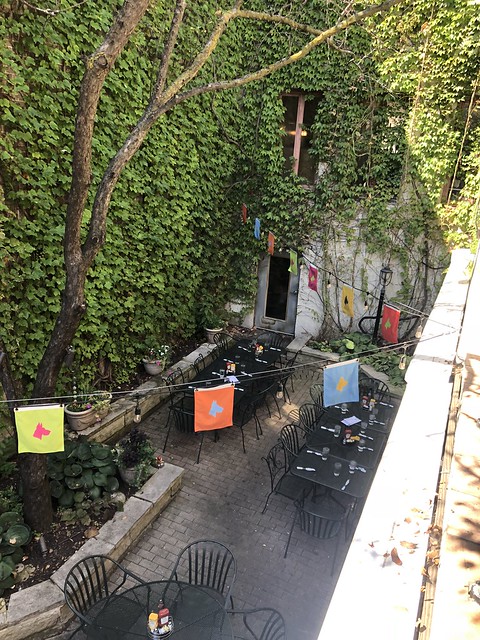 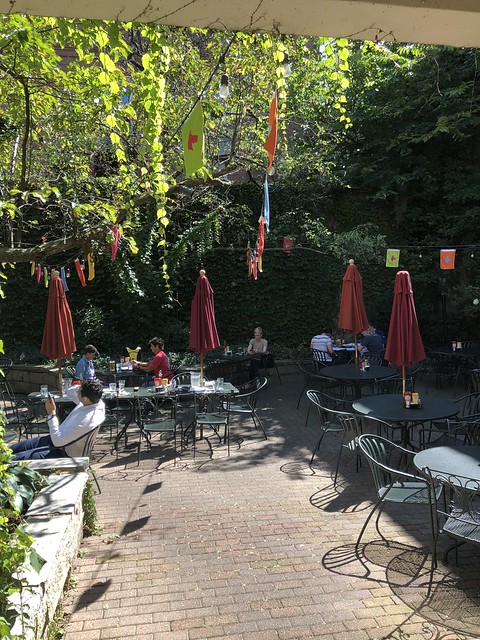 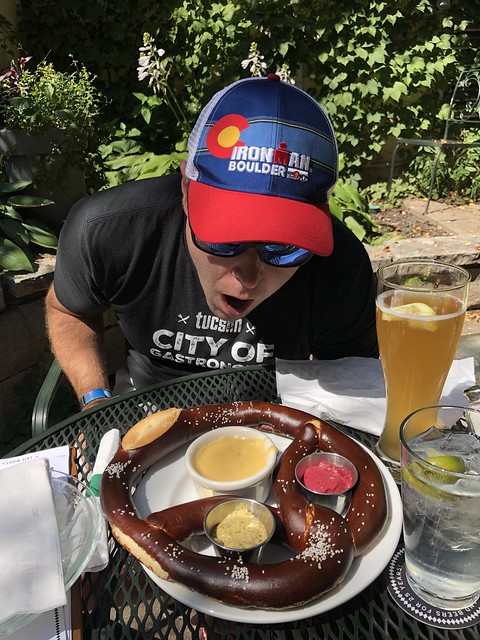 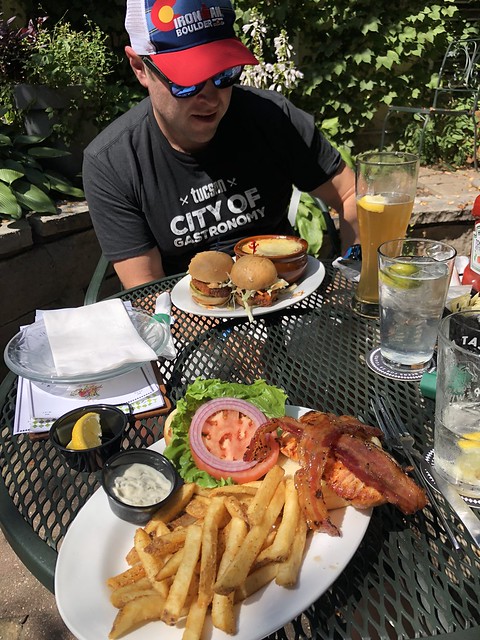 Overall, it wasn’t bad. We split the massive pretzel as an appetizer (B was doing his best to shove a lot of food in my face this week). I had a different type of fish sandwich (salmon) and B had a Nashville hot chicken sandwich and onion soup.

We went for a ride with a friend that afternoon and then for dinner, we decided to do another “when in Rome” and go eat at State Street Brats. 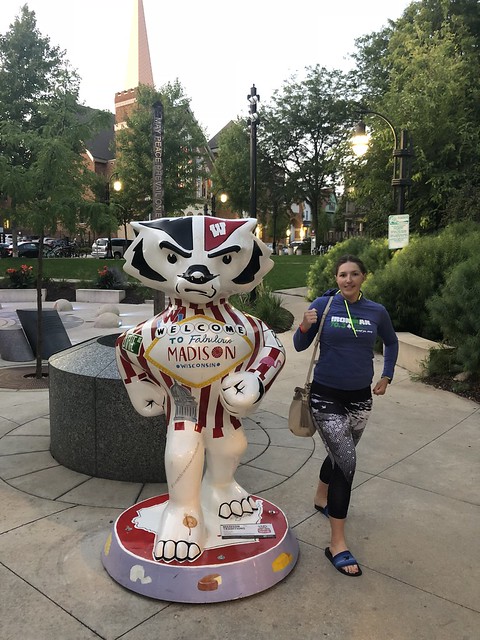 There are fiberglass Bucky Badgers all over town. I tried to emulate him here. 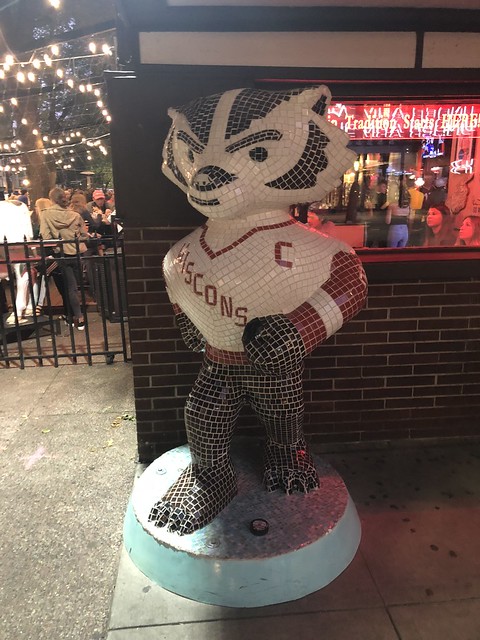 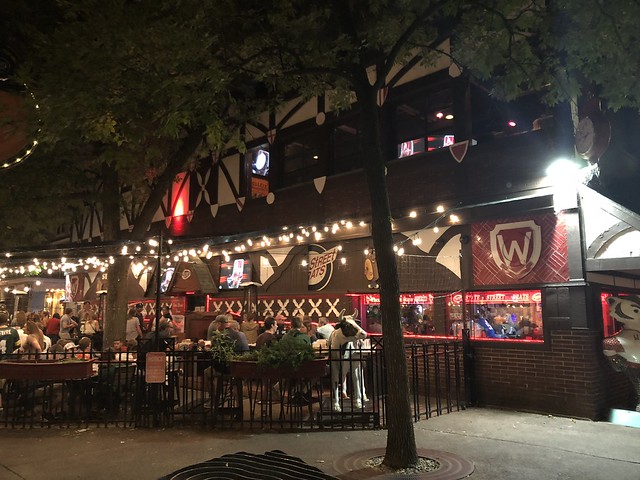 We ended up doing a mini tour of cheese curds on this trip, and State Street Brats was the first place we tried. Weren’t bad. Brat was okay, too. We sort of found a part of an empty table to stand at because apparently the Green Bay Packers were playing that night and it was packed. Also packed with college kids. I’m telling you, at 36 I don’t feel old in general … unless you throw me in a bar on a college campus filled with undergrads. Then HOLY SWEET JEEBUS do I feel ancient.

Afterward, we tried a local ice cream shop that B’s ex (who is from Wisconsin) recommended in the Chocolate Shoppe. 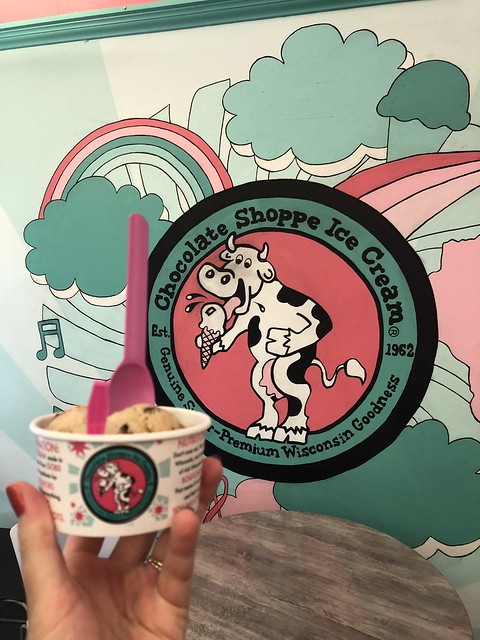 I had the Latte-Da. It was tasty.

Friday morning was taken mostly up with a practice swim, as I wanted to get in Lake Monona at least once pre-race. I also went to an athlete briefing, as, well, I was in town for a race and that was something I needed to do. I was also super happy I had checked in the day prior as the lines for that? So long.

I was planning on doing the Undie Run … but lost confidence, so B and I just did a short mile shakeout run to lunch. Lunch was sushi at Sushi Express on the UW campus as we always like eating sushi a day or two before a race. Plus it is (or at least can be) a lot lighter of a meal which was definitely needed. 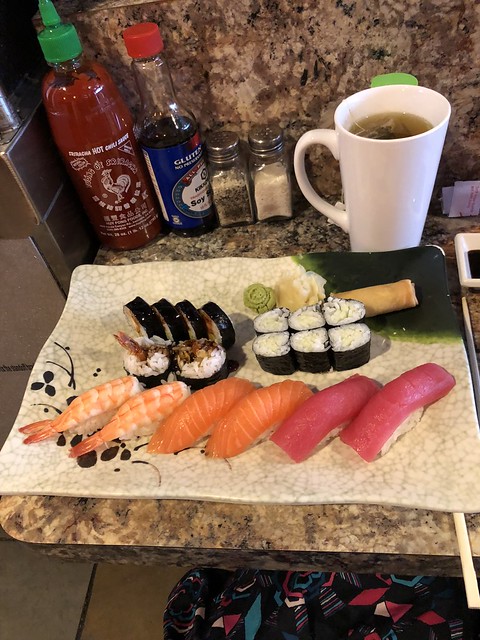 After lunch, a shower and then mostly chilling out starting to get my bags prepped for the next day. 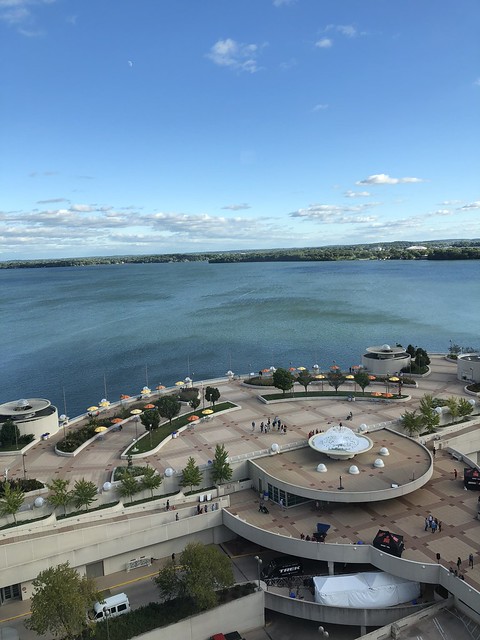 But also a picture of Lake Monona and the top of the convention center from the room we ate breakfast in every morning. I swam there.

For dinner, we met up with B’s cousin Nicole, who lives in Madison. Our first thought was the Old Fashioned … but they had like a 90 minute wait and I didn’t want to eat dinner at 8p. So, we wandered off to another place and tried the Tipsy Cow. I didn’t take pictures, but they weren’t bad. Tipsy Cow ended up being stop two on the cheese curd tour, and theirs were better than State Street’s. I ended up having some chicken caprese sandwich thingy that was actually really pretty good (if a bit heavy on the balsamic). I think B ended up doing fish fry (fish and chips) and I can’t remember what Nicole had.

The main activity this day was the Madison Farmer’s Market, which takes place around the entire square. 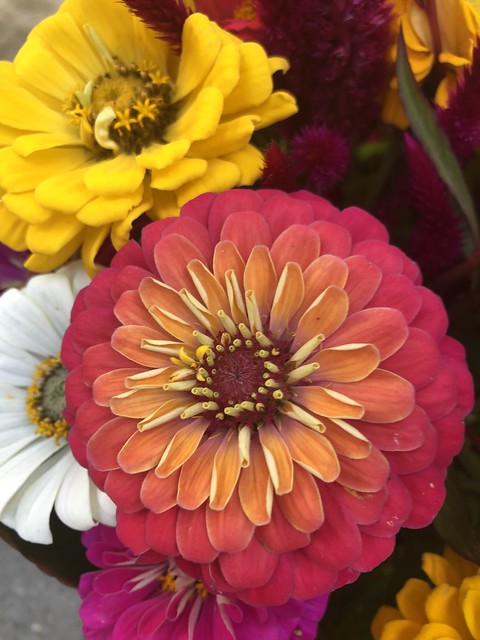 Some of the gorgeous flowers on display.

We ended up getting a few things. Brandon got some apples, I bought a cucumber to just eat, and we got a large bag of 5 dozen ears of corn so I could attempt to make tamales when I got home. (Which I did. It was a disaster. Hilarious, but a disaster.) We also got a pumpkin cream cheese muffin from a vendor for my morning pastry as I wanted to get coffee from a local place that morning … which I did, in Colectivo Coffee. 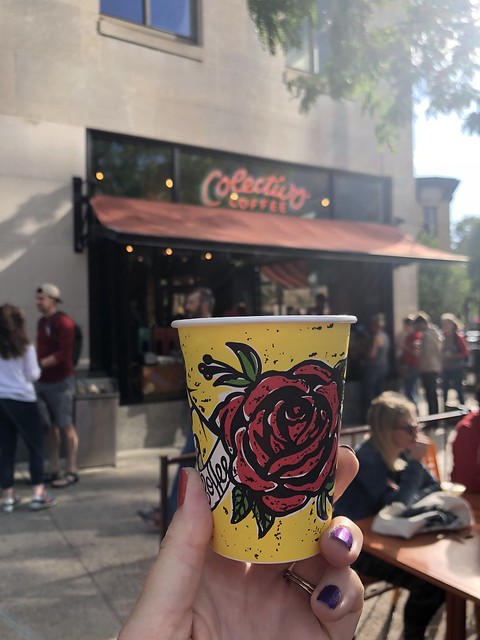 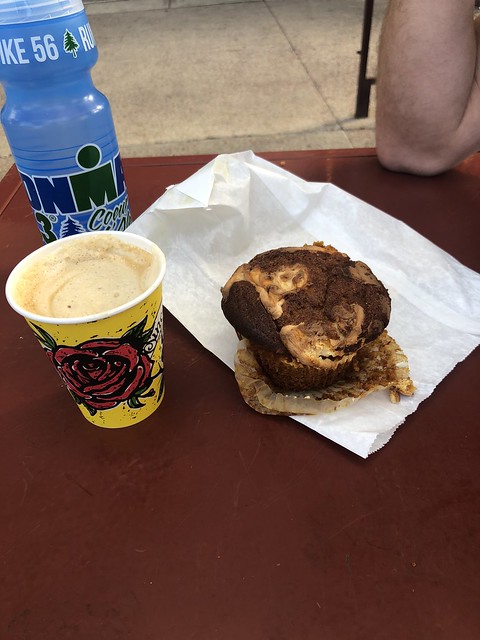 After that, back to the hotel so I could prep all of my gear bags and B could head down to his volunteer shift checking in athlete bikes.

I packed up my gear bags and took them and my bike down to get racked and placed for the next day. I ended up seeing a few friends at bike check-in, as I ended up hanging out for the rest of B’s shift. We saw our friend Loberg from out here in Colorado (and I took a picture to send to my friend Katie, who’s her coach) and then chatted with an old SMASH teammate, Taryn, post-check-in shift.

After talking with Taryn, we were both fairly ravenous, so we went off to lunch to go try the Old Fashioned again. 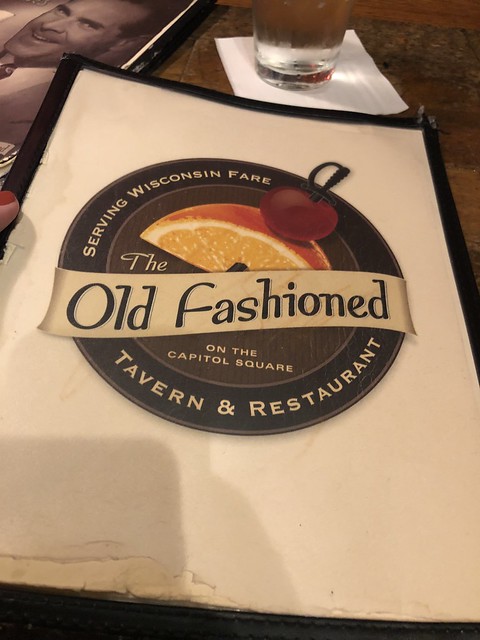 Lunch was still crowded, but we were able to find an immediate seat at the bar as opposed to waiting 20-30 minutes, so that was nice.

The cheese curd tour continued (and ended), and I think they had the best of the three we tried (with points taken off as they might have been the greasiest, too). 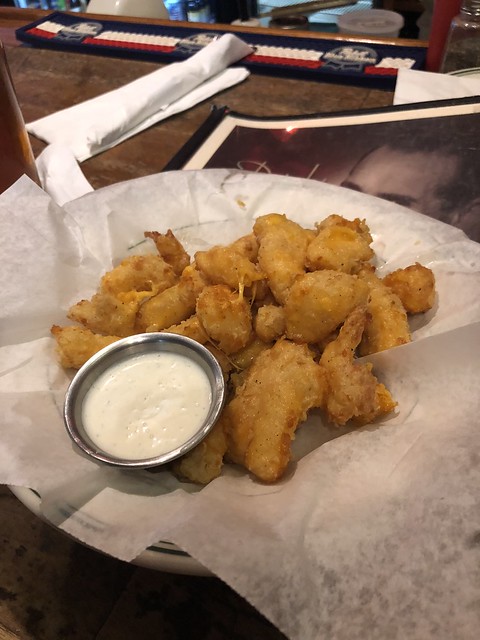 (I will honestly say though, I think my favorite curds are still the ones we get at the Minnesota State Fair.) 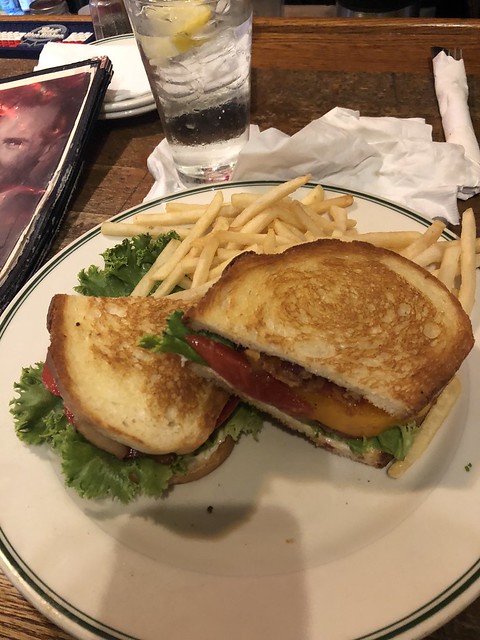 I got this delicious heirloom tomato BLT. I have no idea what B ate.

After lunch, it was time for me to stay off my feet until dinner, so that’s what I did.

Dinner was at the Bassett Street Brunch Club, as I needed to do my usual breakfast-for-dinner. We were joined by more of B’s family – Nicole, and then his cousin Peter and his partner Emilio who drove up from Chicago. 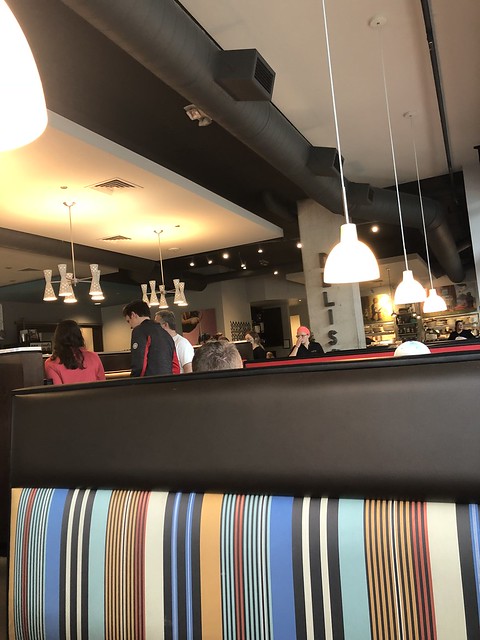 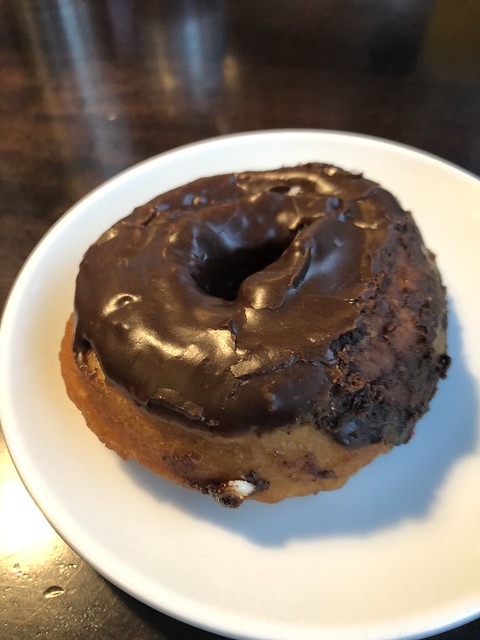 When a place makes their own doughnuts … you kinda have to get one. 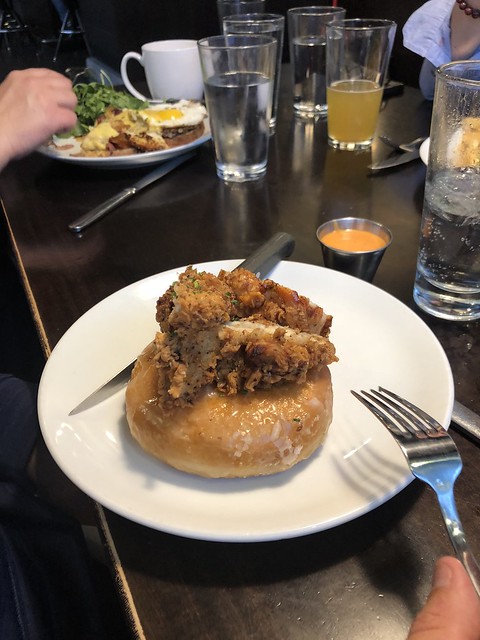 B’s chicken and doughnut (with Nicole’s savory french toast waaaaay in the background). 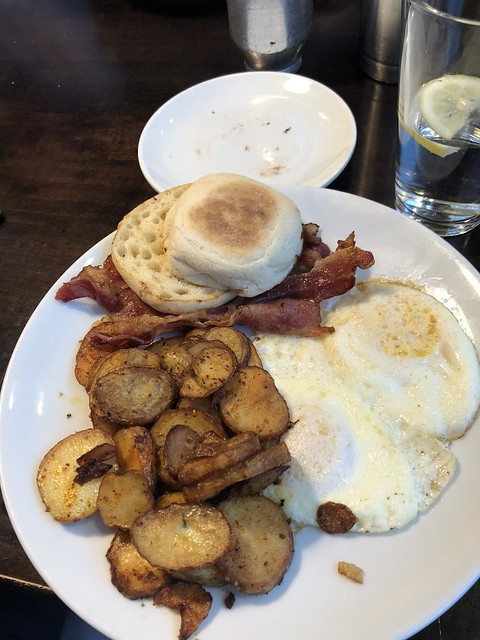 My standard ol’ breakfast. Not the best I’ve had, but it did the trick.

Race day for me! Pretty much spent all day on the race course. Again, go to the tri blog if you’re curious.

B did a great job cheering and supporting … but I have no idea what he ate all day, so the food below is just me.

I actually slept well post-race, which doesn’t always happen for me. B actually had to poke me awake so I could go downstairs to the convention center and buy my finisher’s jacket.

Breakfast was after that, and then it was all about packing up the car to leave. And meeting my friend Jen who lives in the Springs to get the five cases of salsa she bought at the farmer’s market to transport home for her.

The rest of the day was mostly spent en route to Minnesota, as we decided to visit B’s parents since we were basically in the neighborhood.

Food Eaten: Breakfast: hotel, Starbucks. Lunch: the Ground Round. Dinner: Green Mill. Snacks: Dairy Queen (my throat hurt from so much breathing during the race; needed something to make it feel better), apps at the in-laws.

We woke up super early to leave B’s parents as he wanted to try to make it back in time for bowling that night. Sooooo … that’s what we did, not even stopping for breakfast until … Owatonna, I think. Then, just a long day of pushing through with quick stops.

But we made it back for bowling.

Food Eaten: Breakfast: Starbucks. Lunch: Taco Bell (along with random car snacks. lunch kinda wasn’t really a thing). Dinner: whatever B ate at the bowling alley, whatever I scrounged up in the kitchen.